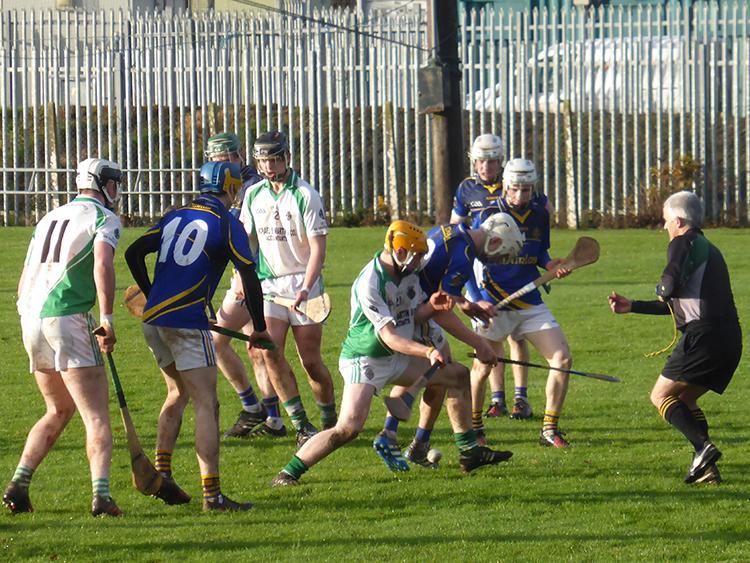 Wednesday at Dundrum was not an afternoon for aesthetics as Thurles CBS ground out a five-point win over John Kiely’s Abbey CBS side in greasy conditions to book their place in the last eight of the Dr Harty Cup.

You had to admire the bravery of an Abbey CBS team which led this bruising battle by a point (0-5 to 0-4) with 27 minutes played, but Thurles CBS upped their level of performance considerably thereafter, out-scored their opponents seven-one either side of the interval and led by a significant five (0-11 to 0-6) by the 37th minute. Abbey CBS tried valiantly to engineer a route back into this contest, but the Thurles lads had now established a significant buffer between the sides and were good value for a place in the last eight.

Riain Doody and Darragh Woods traded early placed balls before Nathan Murphy-Crowe cracked over a superb left-handed point following neat work by Kieran Breen to present Abbey CBS with the lead in the fifth minute. Darragh Woods responded with a brace (one free) for Thurles before Riain Doody brought seven scoreless minutes to a close when drilling over another placed ball in the 17th (0-3 apiece).

Some miscommunication in the Abbey CBS goalmouth in the 19th minute almost permitted Darragh Woods’ lobbing sideline ball to find the net before Woods and Doody traded frees, once more. The searing effort of the Abbey CBS lads earned a significant dividend in the 27th minute when a bustling run from Kieran Breen created an opportunity for Adam McGrath to fire his side into a narrow lead.

Thurles CBS, however, upped their performance a gear or three during the closing minutes of the half and led by two at the break (0-7 to 0-5) thanks to three efforts from Darragh Woods (two frees). Woods’ point from play was a beauty while a magnificent catch in traffic from Thurles wing-back James Ryan adorned the opening period.

Early in the second half the Thurles CBS wide tally had climbed to ten before James Ryan picked out Anthony McKelvey with a neat delivery and the Moycarkey-Borris man fired his side into a three-point advantage. Riain Doody (free) responded for Abbey CBS, but a right-handed point from TJ Butler and a Woods free preceded a Woods cracker from play in the 37th minute (0-11 to 0-6).

Thurles CBS conceded 17 frees during this encounter and such indiscipline presented Riain Doody with an opportunity to drag his side back into contention. Indeed, two converted frees left a break of a ball between the sides (0-11 to 0-8) entering the final quarter.

Bryan O’Mara intercepted an Abbey CBS hand pass with 11 to play and cracked over a smashing long-range point and although Riain Doody responded with another placed ball to leave three in it Thurles CBS saw out this contest in composed fashion. Indeed, a Darren Flood effort from play and a Darragh Woods free (converted from ten yards inside his own 65-yard line) settled it convincingly.

On November 30th Nenagh CBS progressed to the last eight of the Dr Harty Cup, but only after a tense contest with Castletroy College (1-20 to 1-13). Meanwhile Our Lady’s Templemore signalled their intent and ability when beating Árdscoil Uí Urmaltaigh, Bandon by a whopping 42 points (6-27 to 0-3).

In the last sixteen defending champions Árdscoil Rís, Limerick saw off the challenge of Scoil na mBráithre Rathluirc (4-16 to 1-7) and they will be joined in the last eight by De La Salle College, Waterford who beat Blackwater Community School, Lismore (1-18 to 0-16). Christian Brothers College, Cork beat St Francis College, Rochestown (3-18 to 3-12) and CBS Midleton got the better of Scoil Na Trionóide Doon (1-15 to 1-12) while St. Colman's Fermoy required extra-time to beat St Flannan's Ennis (4-22 to 2-19).