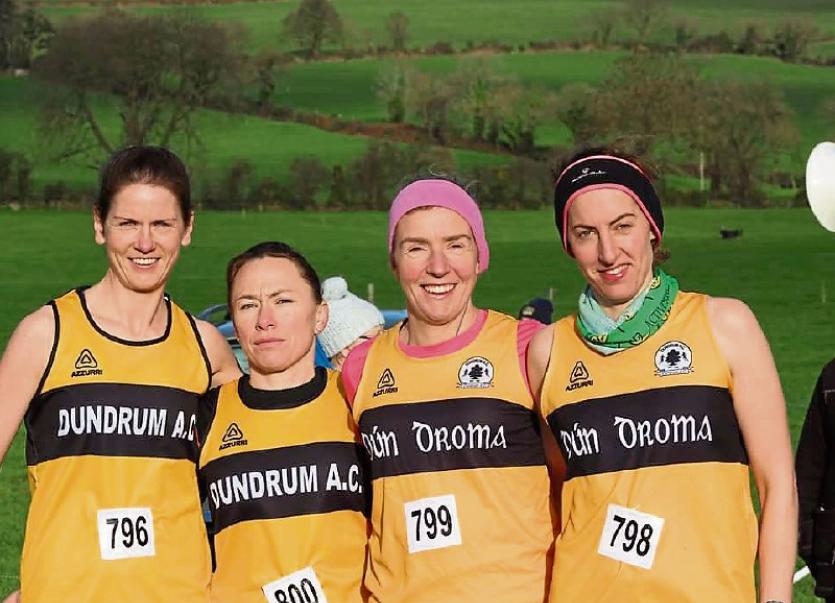 Once again, the host Club Mooreabbey Milers had the event well organised.

In the Junior Women’s race we had two very good performances from Eimear Loughman (Dundrum AC) and Aoife Courtney (Mooreabbey Milers AC) with Eimear winning the Gold medal and Aoife the Silver after a very good race.

The Senior women’s race saw Linda Grogan (Dundrum AC set a strong pace from the start as she was closely followed by Mary Louise Ryan (Mooreabbey Milers AC) and Phil Ryan (Ballynonty) with the chasing pack in close attention.

As the race unfolded Linda increased her lead and came home a worthy champion in 26 mins 24 secs.

This was a great performance by Linda who has achieved the clean sweep of County Novice, Intermediate and Senior Cross Country title in the one season,, indeed the first female athlete to achieve this honour since 2000.

Mary Louise Ryan came through to win the Silver medal in 27 mins 25 secs and improving on her Bronze medal performance last year in Clonmel.

Phil Ryan won the Bronze medal after a great tussle with Mary Louise over the closing stages in 27 mins 31 secs.

In the team event Moyne A C made Club history when capturing the Sureprint for the very first time in their history as County Senior Women’s Cross Country Champions.

John Flynn and Eibhlis Purcell will savour this fine achievement.

The Silver medals were won by the Dundrum trio of Linda, Mairead Julian 10th in 29 mins 54 secs and Martha Quirke 13th in 32 mins.

The Bronze medals were won by the Thurles Crokes who edged out the host club, Mooreabbey Milers, on countback as both team finished on 25 points.

Looking at the points only 2 points separated the top four teams, and to add to the spice the team positions changed a number of times throughout the race.

The Senior Men’s race over 5 laps saw an early break of three athletes that included Kevin Moore (Dundrum) and the Clonmel brothers Kevin and eventual winner William Maunsell as they set a good pace over a demanding course.

As they approached the hill on the 3rd lap the Maunsell brothers opened a slight lead on Kevin Moore and gradually increased that lead.

So going out on the final lap they were still stride for stride, like they were at the County Senior road battle earlier this year in Dundrum where Kevin edged it on the line, this time it was also going to be decided very close to the line as these two athletes gave it everything.

As they approached the finishing shute William edged in front of a great race to win his first County Senior Cross Country title in 35 mins 35 secs having finished 2nd and 3rd on previous occasions.

Here we also had a piece of history with Mooreabbey Milers capturing their first County Senior Cross Country Club title with their scoring four of Stuart, Tom, Kieran Lees 9th in 39 mins 19 secs and William O'Donoghue 23rd in 43 mins 22 secs, brilliant achievement by this Club in such a short period of time.

The bronze medals were won by the defending champions Clonmel with William Maunsell, Kevin Maunsell, Joey Feery in 19th in 42mins and Nigel O'Flaherty 26th in 44 mins 3 secs.

The team competition also was very close with only 7 points separating the top three teams.

Here we had a B Section with Dundrum winning the Gold and Silver team medals with Mooreabbey Milers capturing the Bronze medals.