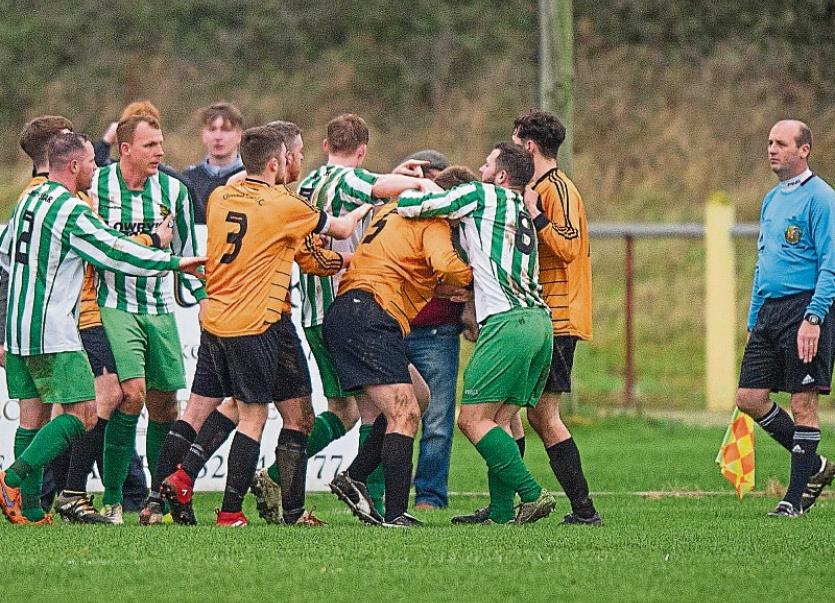 A heated moment during yesterday's Munster Junior Cup clash between Clonmel Town and St. Michael's. The visitors from Tipperary Town won by 3-0.

There were three Munster Junior Cup games played in the TSDL area on Sunday with victories being recorded by St. Michael's over Clonmel Town; Peake Villa over Clonmel Celtic (after extra-time); and Tipperary Town over local rivals St. Nicholas's.

This was the big tie of the round and it brought a sizeable crowd to the Dr. Pat O’Callaghan Complex, many of whom smelt a whiff of blood from the Saints after a number of poor results of late, and thinking that maybe it was time for a changing of the guard back in the Clonmel side’s favour.

However by the end of the game those watching were left in no doubt that the Tipperary town side are still at the top of the tree in the TSDL, and they fashioned a comfortable win to progress once again in the competition that they are the most successful side in its history.

Two first half goals from the visitors from Richie Ryan and an own goal set up the victory and the tie was put beyond Town by an exquisite finish from the Saints 'man of the match' Paddy Fitzgerald midway through the second half.

In Villa’s first outing of 2017 they showed a continuation of the form that has made them look like they are re-emerging as a serious contender in Tipperary once again with a win over Clonmel Celtic to bring them out of the area in this year’s Munster Cup, to add to their successes in the FAI Junior Cup.

They started well and almost took the lead in the very first minute when Dale Loughnane’s header seemed goalbound before being clawed away brilliantly by Brian Sweeny in the Celtic goal. After that things were pretty even until just before the half hour when Villa thought they had grabbed the lead through Gary Lyons, only to be denied by an offside flag. The home side didn’t have it all their own way however and had to call on Stephen Ryan in their own goal a minute before the break to deny Seanie O’Hara giving Celtic an improbably half time lead.

Lyons and O’Hara both shared chances again in the early part of the second period and Jamie Maher shot wide twenty minutes from time when it began to look like the home side might never turn chances into goals. But they finally broke the deadlock sixteen minutes from the end when a Pippy Carroll free kick was met at the back post by Lyons who headed home from what looked like an almost impossible angle. Desperate now Celtic threw everything at the home side, but had to wait until the dying embers of the game to get the equaliser and unsurprisingly it was put away by O’Hara who was their best player all day, and pushed the game to extra time. The game was pulsating and a credit to both sides fitness levels, with the winner coming seven minutes in when James O’Sullivan took a pass from Matthew McKevitt and turned neatly in the area before finding the corner of the net with an excellent finish. Again the Clonmel side threw heart and soul at the home side and had two great chances before the referee finally put them out of their misery.

Tipperary Town continued their historic season by qualifying for the open draw of the Munster Junior cup for the first time with a good victory against local rivals St Nicholas on Sunday last. The game was eight minutes old when the visitors took the lead through Darren Neville but that lead only lasted a short time before Darragh Bennett beat the visiting defence and crossed for Philip O’Doherty to equalise. After that though, it became the Vinnie Godfrey show as the Town striker helped himself to a goal both sides of the break and put his side firmly in control on this game. The Saints never gave up however and brought the game back to a single goal tie fifteen minutes from time with Philip O’Doherty’s second. But the respite was brief and Godfrey stretched the legs again in the final ten minutes and hit two more to ensure his side would take that coveted place in the next round of the draw.