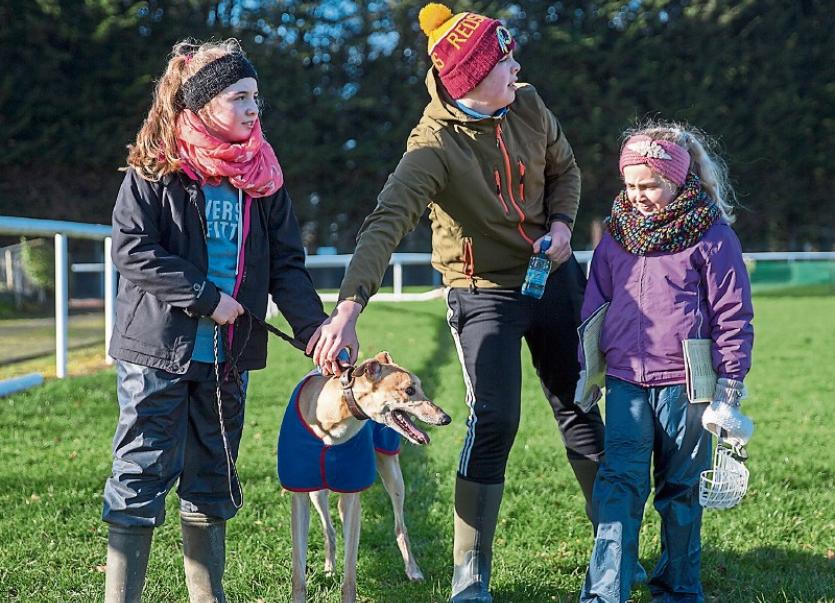 The Owen McKenna-trained Dicks Bimbo with Aliyah, Ciaran and Freya McKenna after it won its course in the first round of the Horse and Jockey Hotel Oaks at the National Coursing Meeting in Clonmel.

Local dogs may have drawn another blank at this year’s National Coursing Meeting in Clonmel but some went close enough and with a bit more luck could have threatened to take some silverware as the event reached the business end on Monday.

Nevertheless, organisers were cock-a-hoop as the 92nd version of the Powerstown Park meet drew to a close, with bumper crowds reported to have flocked to the racetrack over the three days.

The Saturday to Monday format is here to stay and the Irish Coursing Club (ICC) will feel vindicated with attendance figures up by 1,000 on last year, according to initial estimates.

“Coursing is on a high”, ICC president Brian Divilly said towards the end of proceedings on Monday as he reflected on yet another successful weekend.

“The breeding of coursing dogs has remained steady right throughout the recession, coursing breeding is up every year, attendances are up. Even at local meetings all this year, it’s something special.”

The weather provided the usual mixed bag of conditions, ranging from the mild and pleasant on Saturday to the wet and gloomy on Sunday morning, to bright and dry by Monday afternoon.

The only downside was the lack of a local winner in any of the main events, although not without giving their supporters a run for their money.

Ballygerald Buzz, trained by Owen McKenna and owned by Pamela Holt from New Inn and Noelle O’Brien from Clonmel, recorded some nifty times along the way to the Boylesports Derby semi-final but came up against the formidable Reikers Island, who ended up sharing the prize with full-brother and kennel mate Blades of Fire.

In the Horse and Jockey Hotel Oaks, Dicks Bimbo was the morning favourite when day three came around and was the fancy of many to secure the spoils for the Tobin-Culhane-Lonergan syndicate which includes Clonmel brothers Paddy, John and Liam Tobin and John’s son Pat.

Unfortunately, after recording the best time of the Oaks on day two, the Owen McKenna-trained bitch seemed to go off-line with the quarter-final apparently at her mercy and she gave way to eventual champion Knockout Glory.

Astana Rubie, trained by David and Margaret Flanagan, made it to the Grace and Matt Bruton Champion Bitch semi-final but lost out to Killucan Rose who ended up winning the stakes.

The Flanagans also had Barna Wonder in the Oaks and she made it to the second round before being eliminated by Tree Top Kerry.

Wilderness Queen, owned and trained locally by Tom Drohan, was the talk of Powerstown Park after round one of the Oaks on Saturday and seen by Sunday morning as a possible winner but was shocked by Our Miztique in the second round after leading early on.

As usual, patrons at the national meeting came from all parts of the country and beyond, with the regular sizeable contingent from the North and quite a few making the journey to Clonmel from across the Irish Sea.

Tralee-based bookmaker Liam Brassil was one of about 30 plying the trade in the busy betting ring and he agreed with Brian Divilly’s assertion that it was a good year for the event.

“It’s up on last year,” he said midway through day three, adding that there was “more money” around than in recent times.

A veteran of 30-plus trips to Clonmel over the years, he said coursing has changed “for the good” in his time, with facilities improving all the time.

One group who will remember the 2017 meeting for a long time are the Carrs from Westmeath, with trainer Kevin Carr and his family members and friends in the Cheese and Chips Syndicate enjoying a Champion Stakes/Champion Bitch Stakes double, thanks to Howdododo and Killucan Rose.

“It’s like winning an All-Ireland,” as Kevin put it in the run-up to their hour of glory. “The coursing is always very good in Clonmel and the crowd that’s there always enjoys it.”

Along with thousands of others, they’ll be back.