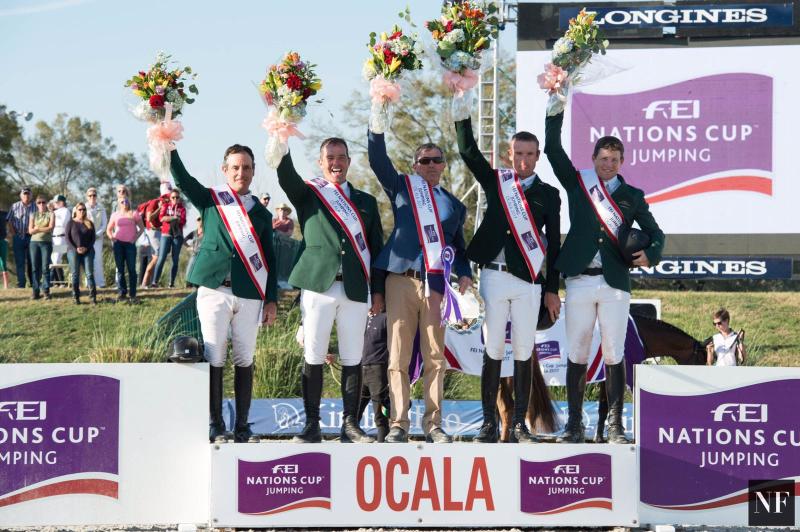 It was Ireland’s third time winning the trophy, with Carrick-on-Suir man Kevin Babington and Shorapur, owned by Shorapur LLC, lowering the penultimate fence first time out, before teammate Cian O’Connor produced a clear with the Ronocco jump-owned Seringat. This left Ireland in the lead on four faults after the first round, with one fence in hand over the USA and Mexico.

A tense final round saw Cian O’Connor deliver a vital clear when last to go with Seringat (his second of the competition), as Ireland denied the United States victory on home soil.

Team manager Michael Blake selected Cork’s Shane Sweetnam as his opening rider in round one, and he didn’t disappoint, giving Ireland a perfect start with a clear round aboard the Spy Coast Farm-owned Chaqui Z.

Sweetnam and Chaqui Z returned with just a single error second time out and another four fault score from Babington and Shorapur kept Ireland in the driving seat. However, a 12 fault score from Kilkenny’s Richie Moloney and Carrabis Z, coupled with a clear round from America’s Beezie Madden, meant the pressure was on Meath-based O’Connor to deliver when last to go.

A clear round would give Ireland the trophy, one fence down would see a jump-off with the USA and two fences down would hand victory to the hosts. However, O’Connor and 11-year-old Seringat never looked like touching a pole and crossed the line to complete their double clear round (one of just three in the competition), riding Ireland to a deserved victory.

“We were well prepared and I think what stood to us was that our team was selected in good time. I am a big believer in selecting your team early, being organised and then hope it works out.

“The boys jumped great, Cian was under pressure at the end after Beezie Madden jumped clear. It was a strange competition in that the water jumped great in the first round but in the second, four or five horses in-a-row were in it, including Shane’s horse which we couldn’t believe because he is such a good water jumper.

“The last line was very difficult, with a flat triple bar to a long five strides to a vertical, vertical, oxer combination and it was very hard to meet that first vertical where you wanted,” he continued.

Blake said he couldn’t be happier with his team. “It was a team effort and they were a pleasure to work with. We had a game plan and we stuck to it. We are really delighted with the win. It was very competitive in that the American’s had their strongest team out and were chasing points. This gives us good confidence going forward,” he added.

Ocala was the second Nations Cup of the 2017 season, with a young Irish team finishing sixth in the opening round at Al Ain in the United Arab Emirates on Thursday last.

Ireland will begin their European Division 1 Nations Cup campaign at La Baule, France, in May.