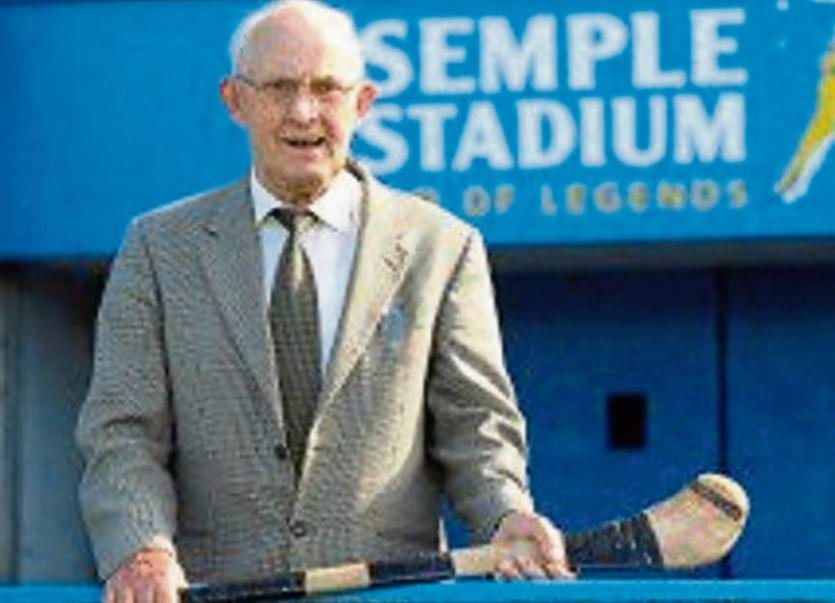 The death has taken place of legendary Tipperary hurler Michael Maher, who five All Ireland senior medals with the county.

He was a member of the renowned Hell's Kitchen of the Tipperary defence during a glorious spell for the team.

He was also an outstanding administrator and was a former County Board and Munster Council chairman.

He was also a former Chief Agricultural Officer for the county.

Born in Holycross, Maher first excelled at hurling in his youth. He arrived on the inter-county scene at the age of seventeen when he first linked up with the Tipperary minor team before later joining the junior side. He made his senior debut in the 1951-52 National League. Maher went on to play a key role for Tipperary as part of the so-called "Hell's Kitchen" full-back line, and won five All-Ireland medals, six Munster medals and eight National Hurling League medals. He was an All-Ireland runner-up on one occasion.

As a member of the Munster inter-provincial team on a number of occasions, Maher won four Railway Cup medals. At club level he was a three-time championship medallist with Holycross-Ballycahill.

Throughout his career Maher made 30 championship appearances. His retirement came following the conclusion of the 1966 championship.

In 1958 Maher won his first Munster medal following a 4-12 to 1-5 trouncing of reigning champions Waterford. Tipp later defeated Kilkenny in the All-Ireland semi-final before lining out against Galway in the All-Ireland decider on 7 September 1958. Galway got a bye into the final without picking up a hurley. Liam Devaney, Donie Nealon and Larry Keane all scored goals for Tipperary in the first-half, while Tony Wall sent a seventy-yard free untouched to the Galway net. Tipperary won the game by 4-9 to 2-5 giving Maher his first All-Ireland medal.

Maher won his fourth National League medal in 1959 following a 0-15 to 0-7 defeat of Waterford, however, Tipperary subsequently surrendered their provincial and All-Ireland crowns.

Tipperary asserted their dominance in 1960 by retaining the National League title with a 2-15 to 3-8 defeat of Cork. It was Maher's fifth winners' medal in that competition. He later won a second Munster medal following a narrow 4-13 to 4-11 defeat of Cork in what has been described as the toughest game of hurling ever played.

This victory allowed Tipperary to advance directly to an All-Ireland final meeting with Wexford on 4 September 1960. A certain amount of over-confidence was obvious in the Tipperary camp, particularly in trainer Phil Purcell's comment that no player was capable of marking star forward Jimmy Doyle. The game ended in remarkable circumstances as the crowd invaded the pitch with a minute to go, mistaking the referee's whistle for the end of the game. When the crowd were finally moved off the pitch Tipperary continued playing with only twelve men, but Wexford won on a score line of 2-15 to 0-11. It was Maher's first All-Ireland defeat.

1961 saw Maher collect a sixth National League medal following a 6-6 to 4-9 defeat of Waterford. He later added a third Munster medal to his collection, as old rivals Cork were downed by 3-6 to 0-7. The absence of the All-Ireland semi-final allowed Tipperary to advance directly to the final itself, with Dublin's first native hurling team providing the opposition on 3 September 1961. The game was a close run thing, however, Tipperary held on to win by 0-16 to 1-12. It was Maher's second All-Ireland medal.

In 1962 Tipperary were still the kingpins of Munster. A 5-14 to 2-3 trouncing of Waterford in the decider gave Maher a fourth Munster medal. Tipperary's nemesis of two years earlier, Wexford, waited in Croke Park to test them once again in the subsequent All-Ireland final on 2 September 1962. Wexford, however, were not the force of old and the side got off to possibly the worst start ever by a team in a championship decider. After just ninety seconds the Leinster champions were down by two goals, however, the game turned out to be much closer than people expected. Tipperary eventually secured the win on a score line of 3-10 to 2-11, giving Maher a third All-Ireland medal.

After losing the following year's Munster final to Waterford in one of the hurling shocks of the decade, Tipperary bounced back in 1964 with Maher collecting a seventh National League medal. Tipperary later cantered casually past Cork by fourteen points in the provincial decider, giving Maher a fifth Munster medal.

The All-Ireland final on 6 September 1964 saw Kilkenny enter the game as firm favourites against Tipperary. John "Mackey" McKenna scored Tipp's first goal after ten minutes as the Munster champions took a 1-8 to 0-6 interval lead. The second half saw Tipperary score goals for fun, with Donie Nealon getting a hat-trick and Seán McLoughlin another. Kilkenny were humiliated at the full-time whistle as Tipperary triumphed by 5-13 to 2-8. It was Maher’s fourth All-Ireland medal.

In 1965 Maher won an eighth and final National League medal as New York were narrowly defeated on an aggregate score of 6-19 to 5-20. Tipperary demolished all opposition in the provincial championship once again and a 4-11 to 0-5 trouncing of Cork gave Maher a sixth Munster medal. Wexford were Tipperary's opponents in the subsequent All-Ireland final on 5 September 1965, however, the game failed to live up to the two classic games between the two sides in 1960 and 1962. Victory went to Tipperary on that occasion by 2-16 to 0-10, courtesy of a brace of goals by Seán McLoughlin. The win gave Maher a fifth All-Ireland medal.