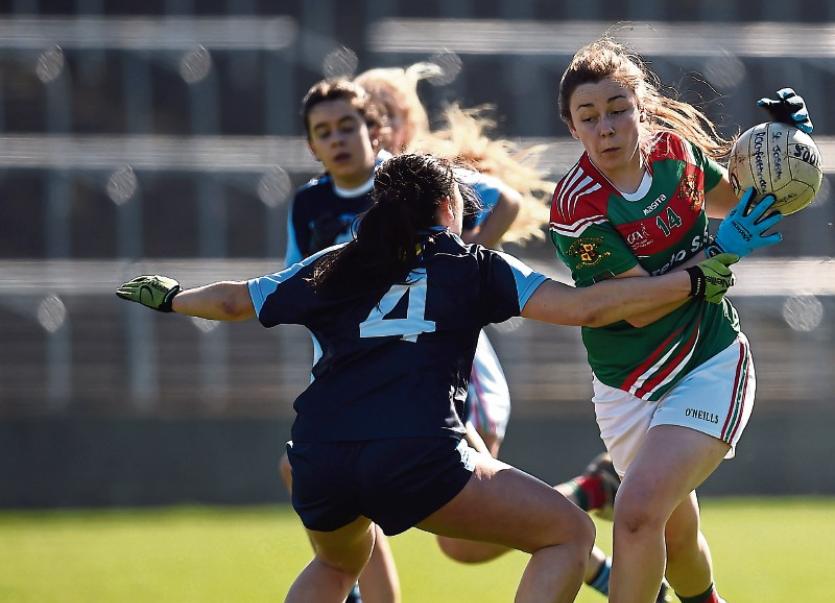 Loreto Clonmel felt all the pain of losing an All-Ireland final as they came up against a well organised and skilful St. Joseph’s of Rochfortbridge in the Post Primary B final played in O'Moore Park Portlaoise, losing 3-12 to 1-9

An early Ava Fennessy point followed by a Kristy Crotty Ryan pointed free gave them an early lead. The first ten minutes of the game had the Clonmel side looking the sharper outfit.

However they failed to capitalise on this period of early dominance and had only two points to show after having played the better football.

Clonmel were guilty of some poor wides in addition to a very good Rochfortbridge defence who neutralised and frustrated the Loreto forwards from scoring chances. Rochfortbridge came into the game and grew in confidence as the game progressed. Loreto fought hard to stay in contention. An injury to Ailish Ryan on fifteen minutes forced her to leave the field of play. 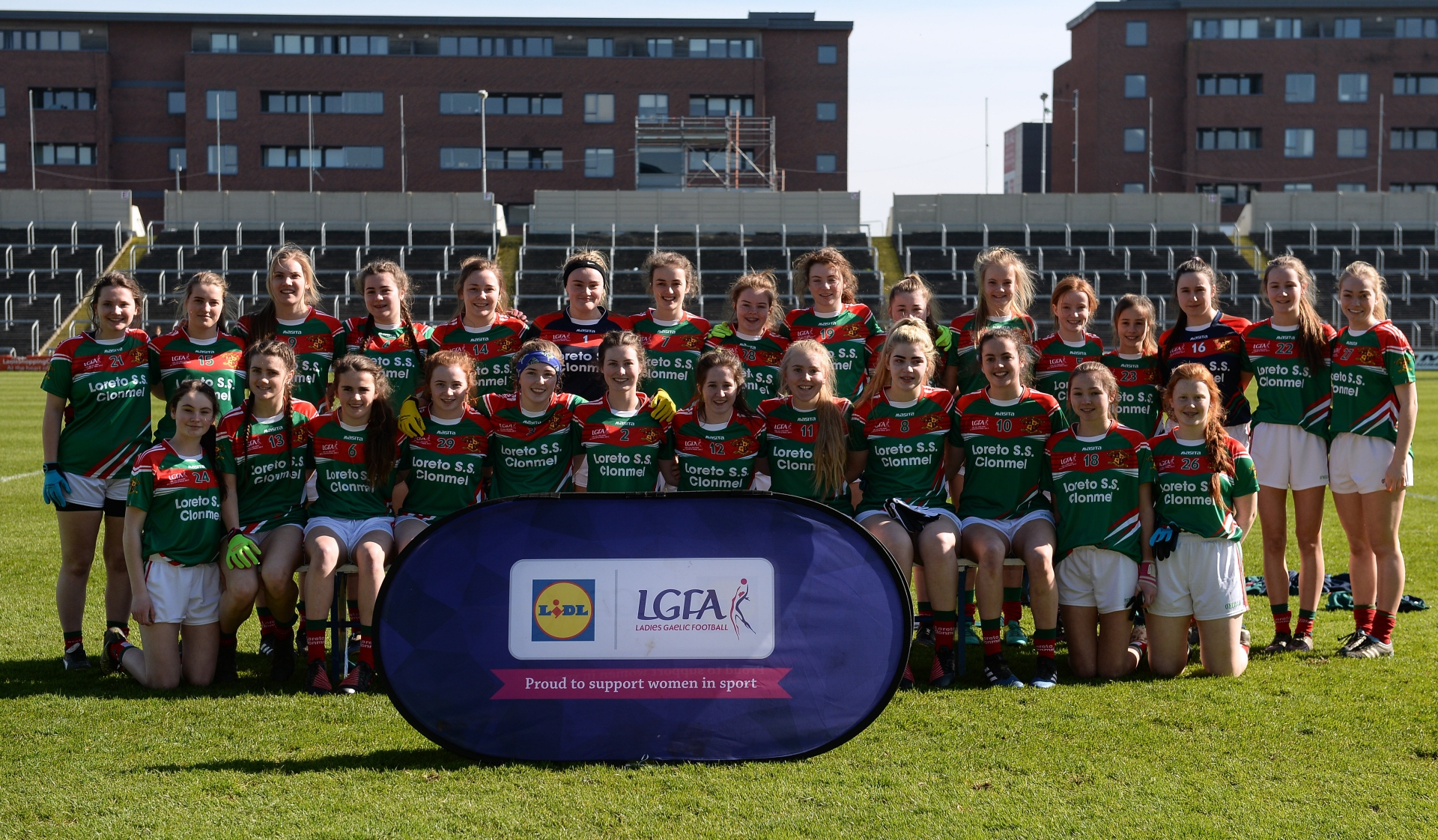 Having to start without two injured players, Captain Aisling Deely and midfielder Brigita Valuntatie, this was a further psychological blow to the Clonmel side and it seemed to impact on the team.

By twenty seven minutes the score was 0-5 to 0-2 in favour of Rochfortbridge, as Loreto stayed in dogged contention but a goal and three points just before half time gave Rochfortbridge a platform for victory and left the Clonmel girls with a big challenge for the second half. Half time score Rochfortbridge 1-8 Clonmel Loreto 0-2.

Five minutes later their Captain Ruth O’Connor had another goal with a blistering shot to the net to put the game beyond reach. Loreto however did not give up and are to be admired for sticking to their task and contesting every ball as keenly as they had done all day. They had some good goal chances before they were justly rewarded with a good goal from Maeve Ryan who had come forward from the backs. 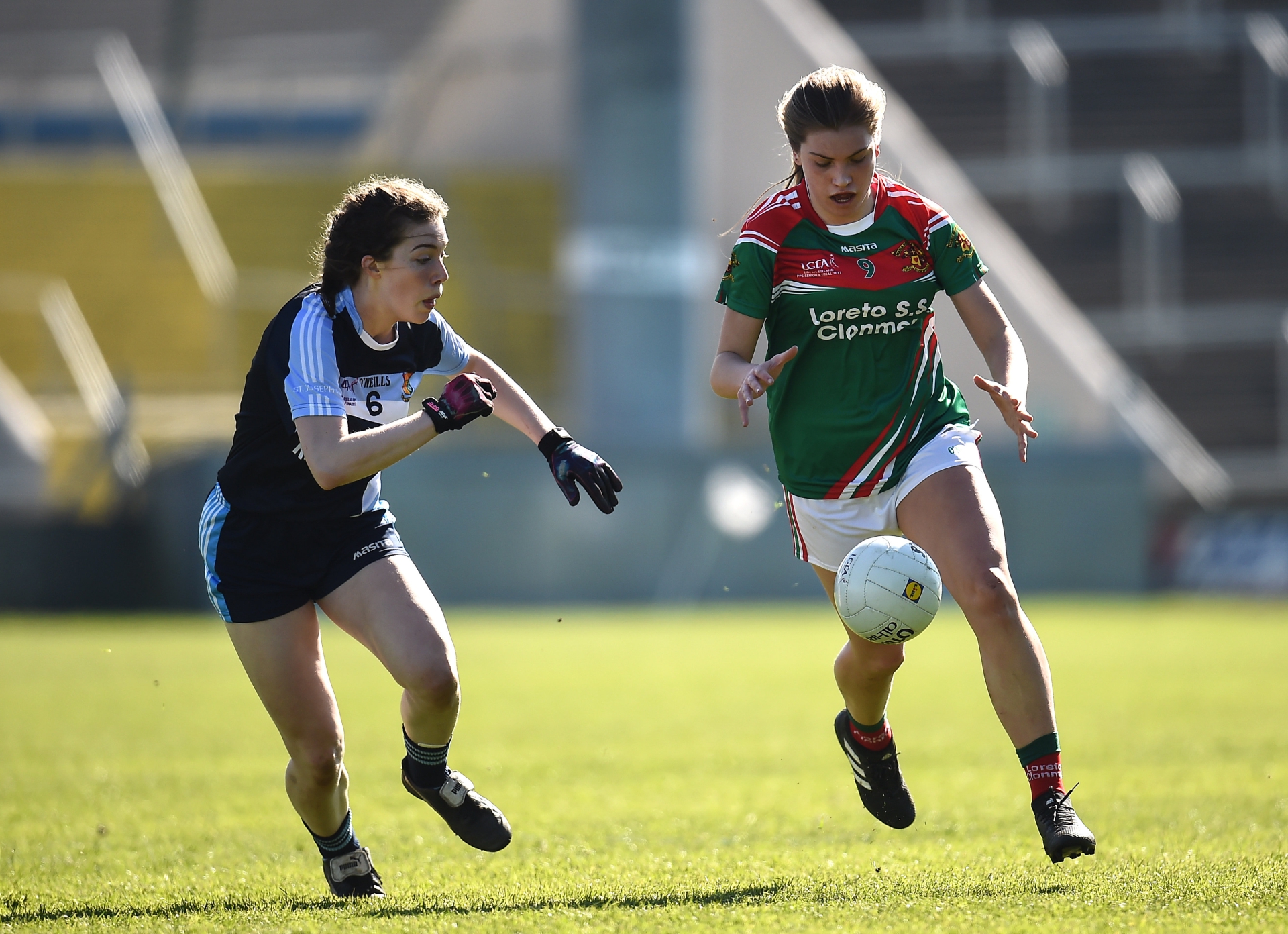 Cora Maher on the ball for Loreto Clonmel.

There was no faulting any players on the Loreto team. They tried their best t to get the fluency and movement, associated with previous games, going but it did not happen on the day. The big occasion took its toll and manifested itself in  handling errors and wrong options at times. This is to be expected of young players on a big stage. They are to be commended for contesting fiercely and never giving up.