Tipp hope to round off league campaign with silverware 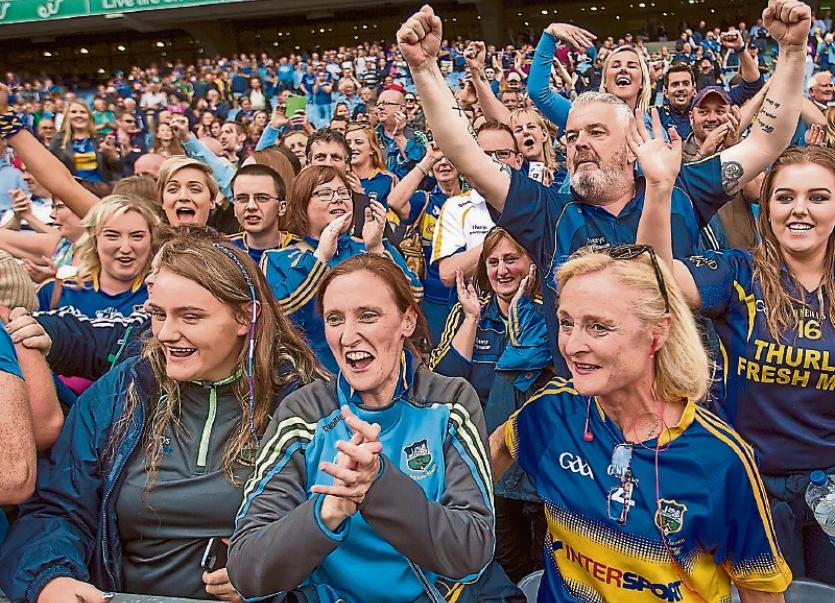 Scenes of joy for Tipp football fans last July when they defeated Galway. Tipp will be hoping for more success on Saturday against Louth in the Division 3 final.

Who would believe it? For the third time in just nine months Tipperary footballers are heading back to Croke Park.

Following on from their outstanding championship displays last July and August against Galway and Mayo, Tipperary by virtue of a magnificent result in winning in  Armagh on Sunday last will find themselves once more back at GAA headquarters on Saturday next.

This time round it is Louth who will provide the opposition for Liam Kearns’ side, in the shoot-out of the promoted teams from Division 3. Indeed it will be the second meeting of the sides within a fortnight, the Wee County were victors on Sunday week last by 0-16 to 0-12 when the sides met at Semple Stadium, Thurles.

Having achieved promotion to Division 2 for next year where they will be in the company of - Meath, Cork, Clare, Down, Cavan, Roscommon and Louth - the important business has been done as far as Tipperary are concerned, their three-year journey towards a footballing upgrade finally achieved. That said, Tipperary will be going all-out for a victory on Saturday, according to Paul Fitzgerald, team selector and former long-time Tipp goalkeeper.

“We have achieved what we set out to achieve, the win in Armagh on Sunday took care of that but this is a chance for the lads to get a national medal, a Division 3 medal, and that is something they all want. A few of them have them already, we won Division 3 in 2009 but it would be nice if we could get our hands on them again on Saturday next in Croke Park,” said Paul who himself has a Division 3 medal under John Evans (2009 v Down) and indeed a Division 4 medal under Peter Creedon (2014 v Clare), the latter won at Croke Park when Tipp, captained by Killenaule’s Paddy Codd, defeated 'The Banner' on a 1-16 to 1-15 scoreline.

“Our main objective has been taken care off and we see Saturday's game against Louth as a bonus game at the end of the campaign. While the game against Armagh was all about the result we will be looking for a good performance first and foremost in Croke Park on Saturday,” said the Fethard man.

“We have a few injury concerns - we were without Jimmy Feehan, Philip Austin, Emmt Moloney and Liam McGrath against Armagh - and we will have to wait and see how we are fixed for Saturday.

“We know that Louth are a very good side as they have shown throughout the league and as we saw in Thurles last week. They are a tough team to break down, they are well organised, well structured throughout the side and they have plenty of pace. But it is a final and we will be going at it in the hope of winning it too to cap a great league campaign,” added Paul.

“Success breeds success and we are having some success of late in Tipperary football. It stems from the recent underage success and like everything else winning is a habit and a lot of these players, especially the younger ones, have known some success and that brings positivity with it. We will be hoping to continue that trend in Croke Park against Louth” concluded Paul.

There is little to choose between Tipperary and Louth going into Saturday's game, both sides recording five wins out of seven games in the regular league - Tipp losing to Sligo and Louth (both at home) but winning all their away games in Laois, Offaly and Armagh. Louth on the other hand lost to Laois and Sligo.

Going on Sunday week’s game in Thurles, Tipperary appeared in control for most of the first period and should have went in at the break, according to manager Liam Kearns “five, six or seven points up” and they also significantly missed a penalty on the stroke of half-time. But in the second half Louth opened Tipperary up and outscored them 0-10 to 0-4 to eventually win by four points. It was a display that greatly disappointed the Kerryman at the helm of Tipp football for the last 18 months.

Reflecting on the Louth game Liam Kearns said afterwards “they wanted it really badly and they got it and they deserved it.” And that will pertain again on Saturday next on Jones's Road, it is a game with little or nothing to separate the sides, whoever wants it most will prevail.