'Noisy neighbours' holding their own among the elite 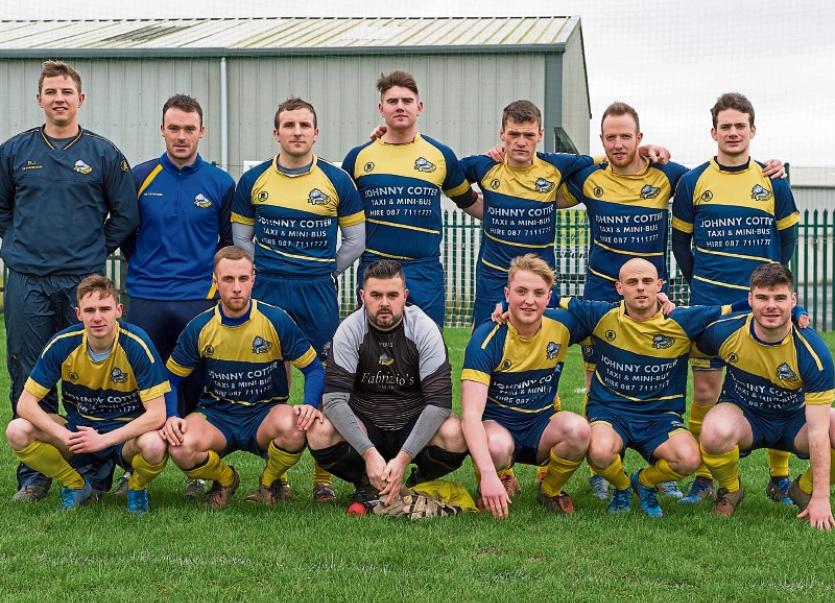 The meterioric rise of Tipperary Town soccer club up through the divisions has been Wimbledonesque bringing all those involved in the establishment of the club on an incredible journey.

Tipperary Town was founded in 2010 and every year since then it has enjoyed either a title success or promotion starting out at the very bottom in Division 4 and reaching the ultimate elite destination this season.

They are now coming to the end of the clubs first season in the Premier division of the TSDL .

It was a brave decision to establish another club in Tipperary Town in the shadow of the powerful St.Michael’s AFC, a club with such tradition and success.

Those involved realised there was an opening for another club and showed great determination and resilience to persevere having starting out with absolutely nothing.

Tipp Town now proudly play in Arra Park, they like to be referred to as the “noisy neighbours” and in their debut season have shown they belong in the top division proving to be a difficult team to beat.

Among the highlights this season was a 2.2 draw away in a derby contest with St.Michaels.Tipperary town were down two nil before staging a memorable comeback to secure a draw.

Of their two remaining games , one of them is at home to St.Michael's which everybody in the club is looking forward to .

Their results and performances have been encouraging indicating an ability to compete with the very best. Away to Clonmel Town was also another gutsy performance that stood out when they lost one nil to a late goal in a tight contest.

Tipperary Town have not looked out of place and their consistent league performances and good cup runs in the Munster Junior Cup and the FAI junior cup has given all involved a massive boost.

“There was a group of lads around in 2010 who felt the town and the huge surrounding area was big enough for two clubs.A public meeting was held, the response was very positive and we just took it from there” said club chairman Brian Kenny.

“It has been a great journey. The draw away to St.Michaels was among the highlighs of the season because of the comeback and it was away from home..It was a great game and wonderful atmosphere, there is nothing like local rivalry in football, that is what makes it” said the club chairman.

For the first few seasons Tipperary town availed of the hospitality, and still do, of the Abbey and St.Albie’s where they played their games..

A future home,a derelict area in Knockanrawley, was identified and the club members put in a tremendous amount of work to clear the site and do the groundwork for a playing pitch to be located there. That pitch was used by Tipperary Town for the 2015 season.

“It was a wasteland, land that was doing nothing and we took it on.That was a huge step for us to take. We have already invested €70,000 in the site between grants and fundraising .We now hope to go on and raise enough money to buy the site and that is the next important move for the club to take,” said the club chairman.

The club, which already has a B team doing well in Division 3 of the TSDL, is now looking at catering for schoolboys and the Tippeary Town ladies senior team has now come under the umbrella of the club.

“We have been punching above our weight on the field, competing at a level that everybody in the club is delighted to have reached” said Brian.

The club chairman said they had received tremendous support among the people of the town for the fundraisers organised and also from the business community.

“It is a very sporting town and area.People are aware of what we are doing and what we are trying to build here and they know that a huge amount of work is being put in to providing facilities in this town by everybody associated with the club” said Brian.

Apponted first team manager at the start of their historic season in the top flight Brian ‘Boca’ Glasheen said they really enjoyed playing against the major football powers in the county this season and were very happy with how they performed.

“We are known as the noisy neighbours, we have a good following and we are very competitive on the field .Most of the players are local and we look forward to building on the success of this season” said Brian.