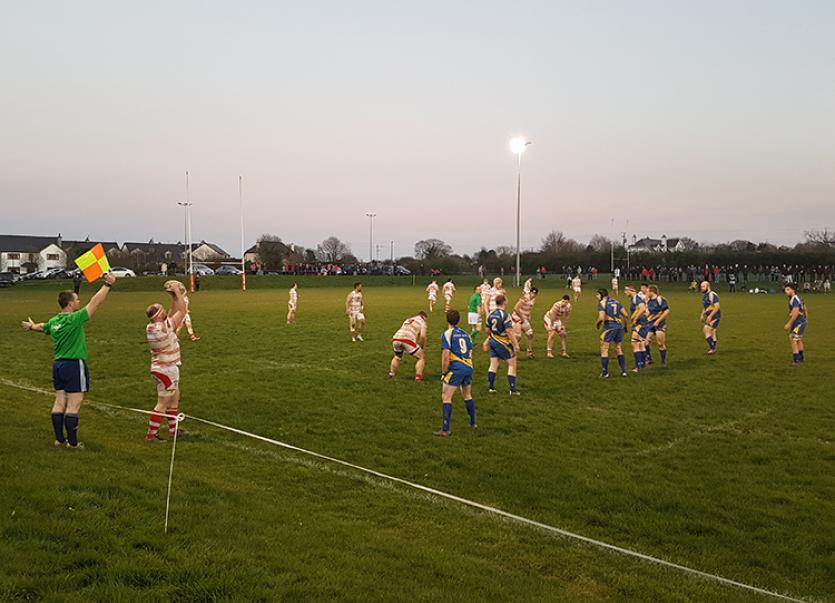 Cashel RFC edged an enthralling Ulster Bank League division 2A contest at Spafield under lights on Friday night - the home just about deserved the win following a ferociously-fought affair.

Cashel RFC avenged a 14-30 defeat suffered at New Ormond Park earlier this season and certainly appeared to enjoy getting one over on their Tipperary rivals. Indeed, this win also secured Cashel’s place in the division while this second successive defeat has made Nenagh Ormond’s task of earning promotion to division 1B all the more complicated.

The home side’s determination, allied to a terrific line speed in defence and Cashel’s ability to disrupt the Nenagh Ormond lineout on a regular basis were key contributing factors to this result while that colossus Ed Leamy was a most obvious candidate for the man of the match award.

Right from the off it was clear that Cashel RFC were prepared to pour themselves into this contest in an emotional sense. And, as early as the fourth minute Ollie McGlinchey booted Cashel into a 3-0 lead following a penalty won deep inside the Nenagh 22.

Five minutes later Cashel were threatening a break-through try, but Brian Fitzpatrick was held up over the line following a lightning-quick counter from the home side. Cashel, however, notched the try that their enterprising start to the contest deserved in the 11th minute - four phases after a five-metre scrum Ollie McGlinchey sold a dummy pass and dived over. McGlinchey added the extras and Nenagh Ormond were in trouble (10-0).

Nenagh tried to respond, but the Cashel RFC players were most obviously enjoying themselves and made life incredibly difficult for the visitors.

In the 30th minute a key moment materialised - Cashel were camped inside the Nenagh 22 once more when Ollie McGlinchey elected to attack the short side, but Ormonde’s Derek Corcoran anticipated and then intercepted the scrum-half’s pass. Corcoran streaked away down the field to score, but the touch judge argued that the left winger had stepped out over the line and Cashel breathed a sigh of relief.

Two minutes later Cashel won a penalty which could have forced the home side thirteen clear, but Ollie McClinchey didn’t connect properly with his effort. On the stroke of half-time Ormond out-half Clayton Stewart also missed a penalty and the sides retired with Cashel leading 10-0.

Nenagh Ormond started the second half in impressive fashion and were rewarded for some controlled attacking play in the 43rd minute when Clayton Stewart booted over a penalty which cut the home side’s advantage to seven.

Six minutes later this contest appeared to reach a critical juncture. Nenagh were enjoying a dominant period of the game, but Cashel were in no mood to concede an inch of ground. Nenagh managed to penetrate the Cashel defence at one point, but were held up over the line. Then, from the resultant five-metre scrum, Cashel RFC defended ferociously and forced a knock on which appeared to knock the wind out of the Nenagh lads.

A superb Cashel attack in the 64th minute almost yielded a try for Rory O’Connor, but the full-back was bundled into touch at an opportune moment. Nenagh Ormond, however, failed to exit their 22 following the subsequent lineout, Cashel turned the ball over and Pat O’Connor landed a vital drop goal (13-3).

The sin-binning of Cashel hooker Niall Fitzgerald presented Nenagh with an opportunity to force themselves back into this contest and the visitors did so in the 67th minute - a determined carry from Fergal Brislane at first receiver created the room for Clayton Stewart to play Derek Corcoran in. Corcoran beat the Cashel midfield with a neat step and touched down under the posts (13-10).

Five minutes later Nenagh Ormond almost stole into the lead - Ormond pushed Cashel off their own scrum and Lemeki Vaipulu looked certain to score before the home side’s scramble defence recovered just in time to stop the marauding number eight.

With Nenagh desperately chasing the winning score and with the atmosphere building we were then treated to a thrilling conclusion at Spafield.

Nenagh Ormond were camped deep inside the 22, but there was simply no way that Cashel RFC would permit their rivals to score. Cashel clung on and the manner in which the home side’s supporters celebrated the win at the final whistle suggested just how much this narrow victory meant.

Cashel will conclude their league programme away to Malone at Gibson Park, Belfast on Saturday, April 15th while Nenagh Ormond will play one final game at home to Belfast Harlequins before facing into the play-offs with a potential place in division 1B up for grabs.