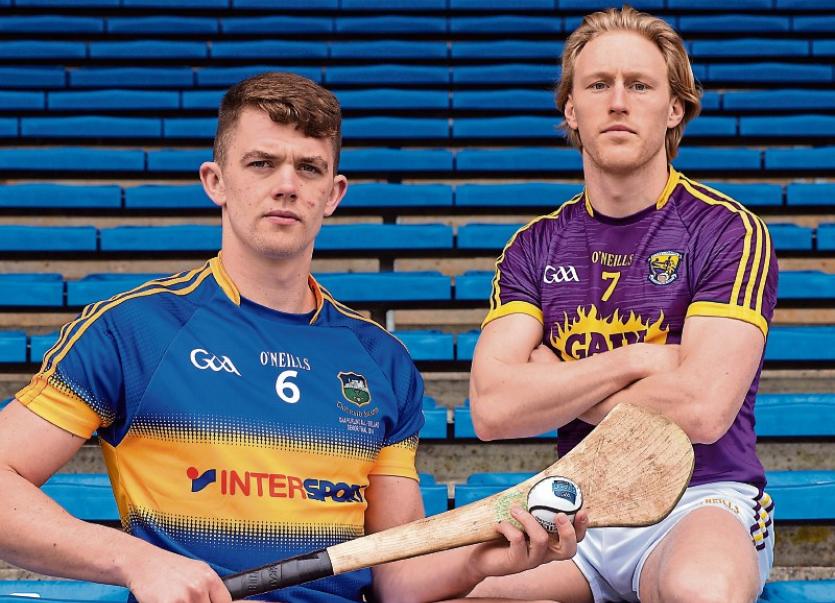 Tipperary's Ronan Maher and Wexford's Diarmuid O'Keeffe will be in opposition in Sunday's National Hurling League semi-final at Nowlan Park, which starts at 4pm.

Tipperary are odds-on favourites to beat Wexford in the Allianz National Hurling League semi-final at Nowlan Park on Easter Sunday (4pm) but they're unlikely to allow that to distract them as they continue their quest for a first league title in nine years.

However the players won't need their manager Michael Ryan to remind them of the bounce that Wexford have enjoyed since Davy Fitzgerald took over in the hot seat, a revival that stepped up a few notches almost a fortnight ago when they beat Kilkenny in the quarter-final at Nowlan Park.

Semple Stadium had been mentioned as a possible venue for a double header for the Tipp/Wexford semi and the last four meeting of Galway and Limerick. However Wexford opted for a return to Kilkenny, the scene of their big win on April 2nd, in the hope of claiming another major scalp.

After last year's All-Ireland and Munster Championship successes, Tipp have started the new campaign impressively. Successive victories over Dublin, Waterford and Clare were achieved with lineouts that included a healthy blend of experienced campaigners and fringe players.

The momentum was stalled by a draw with Kilkenny and a narrow defeat by Cork, but they got back in the winning groove in the league quarter-final in Tullamore a couple of weeks ago when they eased past Offaly, cruising to an 18-points victory.

More than 30 players have seen action in the league so far. The team selection will be watched with particular interest to see if Brendan Maher, who injured his shoulder against Clare on March 5th, comes back into reckoning. Cathal Barrett made his first appearance of the year as a substitute against Offaly and is sure to be pushing for a starting place on Sunday.

'Bonner' Maher returned last week from his tour of duty with the Defence Forces in The Golan Heights, and while his welcome return will further strengthen the ranks he's highly unlikely to be involved this weekend.

The upturn in Wexford's fortunes in the past few months has been very impressive. Promotion to the top flight of the league had already been secured before they laid down a marker for their likely championship meeting with Kilkenny by deservedly beating The Cats in their own backyard in the quarter-final.

It was only a third victory in their last 21 meetings with Kilkenny but one that they achieved on merit. They led virtually all the way in the second half before a goal in the first minute of additional time from Conor McDonald, one of their main men, saw them home by 2-18 to 0-19.

As well as their talisman McDonald, David Dunne, Lee Chin, Paul Morris, James Breen, Aidan Nolan and Shaun Murphy - who was deployed as a sweeper to good effect the last day - have also been to the forefront of the Wexford revival that has their supporters dreaming of even more good times to come.

The win over Kilkenny is sure to have sent Wexford's confidence levels soaring ahead of Sunday's semi-final. They hadn’t beaten Kilkenny in Nowlan Park since 1957 and it was a first win over their neighbours since 2004.

They hadn't come within 11 points of them since 2011. Having removed that particular monkey from their backs they'll be looking to push on again this weekend.

“We will be trying extremely hard. Tipperary probably won’t fear us too much", manager Davy Fitzgerald said after his team defeated Kilkenny.

“They are the team on fire at the moment but you know what, we have to take on that challenge. I told the boys to embrace it and see what happens. You never know. We will look forward to that game".

Supporters heading to Kilkenny on Sunday are reminded that the game is all-ticket and every person entering the ground, including children, will require a ticket. Adult tickets cost €20 (€15 if purchased before midnight on Saturday) while for students/pensioners they cost €15 and €5 for children. Season Ticket holders can gain admittance through Stiles 14-17 on the Hebron Road with their Season Ticket cards.

Wheelchair users should apply to their own county boards for tickets. Entry for wheelchair users is via Gate 9 on Hebron Road. Group passes cost €3 per juvenile - one free adult for every 10 juveniles - and are available by application to Croke Park. Entry to the ground for groups will be Stile 28 in  Ardan O'Cearbhaill.

The O'Loughlin Gaels ground right beside Nowlan Park will be open for parking and refreshments throughout the day. Further car park details will be announced as soon as they are confirmed.

Supporters travelling from the Clonmel/Callan direction are advised to be aware of road works close to Kilkenny city. Alternative routes, to avoid possible hold-ups, will be signposted on match day.

Further details will be announced on the Kilkenny GAA website as soon as they become available. All supporters are strongly advised to purchase tickets in advance to avail of discounts and to avoid queues on match day.