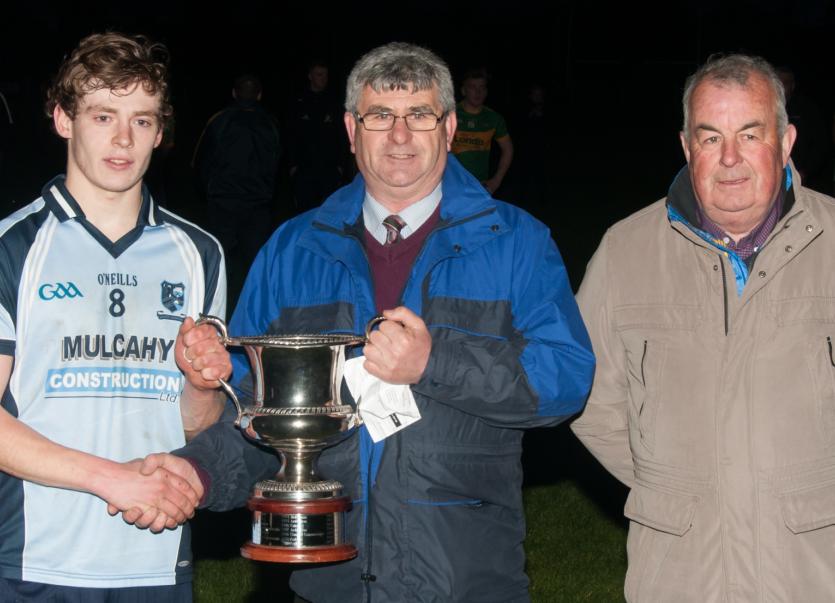 Moyle Rovers captured the South Tipp U 21 A Football Championship in dramatic style at Ardfinnan this evening with a late goal in the second period of extra-time to deny arch rivals Clonmel Commercials a record four-in-a-row of divisional titles.

The hero of the night was substitute Conor Bates, just on the field of play three minutes, who finished a fine move, to send the Powerstown/Lisronagh club home ecstatic and their town rivals crestfallen,

It was a result that looked impossible just a few minutes earlier when Commercials led 0-13 to 0-9 with just three minutes remaining in the fast fading light. But somehow, following two converted frees by midfielder Stephen Quirke, the Rovers were back within a kick of the ball and Commercials were left to protect the dreaded two-points lead.

Moyle Rovers substitute David Roberts then won a magnificent ball around the middle and began a move that culminated in Bates shooting low to the net to unbelievable scenes for the Rovers, beaten in the previous three finals by Commercials.

The sides were impossible to separate all night, and were level at both half-time (0-5 each) and full-time (0-9 apiece) with perhaps Rovers, who kicked 12 wides in normal time, the more likely winners. Just when it seemed their profligacy had cost them dearly, a late equaliser in normal times saved their blushes. And in extra-time it looked as if they had missed their chance yet again, until super sub Bates did the business at the death.

It was an exciting game from start to finish with the sides level no less than six times in the regulation hour's play.

Moyle Rovers perhaps with the share of possession they had in the opening period should have led at the break but two late points from Commercials by Conor McGeever and county senior Jack Kennedy left it level at the break.

Commercials came more into it after half-time and were 0-8 to 0-6 going into the final quarter, Rovers not helping themselves with a dozen wides over the hour. They fought back to level with nice points from Shane Lonergan and Stephen Quirke with three minutes remaining. However, it looked as if Commercials had made it four in a row with Paudie White's free with time almost up. But magnificently Diarmuid Mulcahy, on as a substitute for Darragh Bolger's black card, kicked an equaliser from 30 metres three minutes over time to force extra-time.

What had been saved would look lost in extra-time when Commercials got on top with four unanswered points to lead 0-13 to 0-9 with just three minutes remaining. But miraculously they snatched victory from the jaws of defeat with Conor Bates late late winner.

A first title since 2011 will make it not just a Good Friday but a Great Friday for the Rovers who are out again in a County Semi-Final on Sunday morning in Cashel against JK Brackens of Templemore.