Fethard will feel they let this one slip

Action from tonight's game in Clonmel. Fethard corner back Alan O'Connor comes out with the ball despite the attentions of Bryan Lowry, Arravale Rovers

Hot favourites at 1/10 before the game, Arravale Rovers had to rely on a late second half rally to see off an unlucky Fethard side in the opening round game of the Tipperary Senior Football Championship played at Clonmel on Saturday evening.

'The Blues', back at senior grade this year, looked very likely winners when leading by 2-9 to 1-7 just 11 minutes into the second half, but the West Tipp side dug out a victory when outscoring their opponents by 1-5 to 0-1 over the closing stages for a hugely relieving victory. 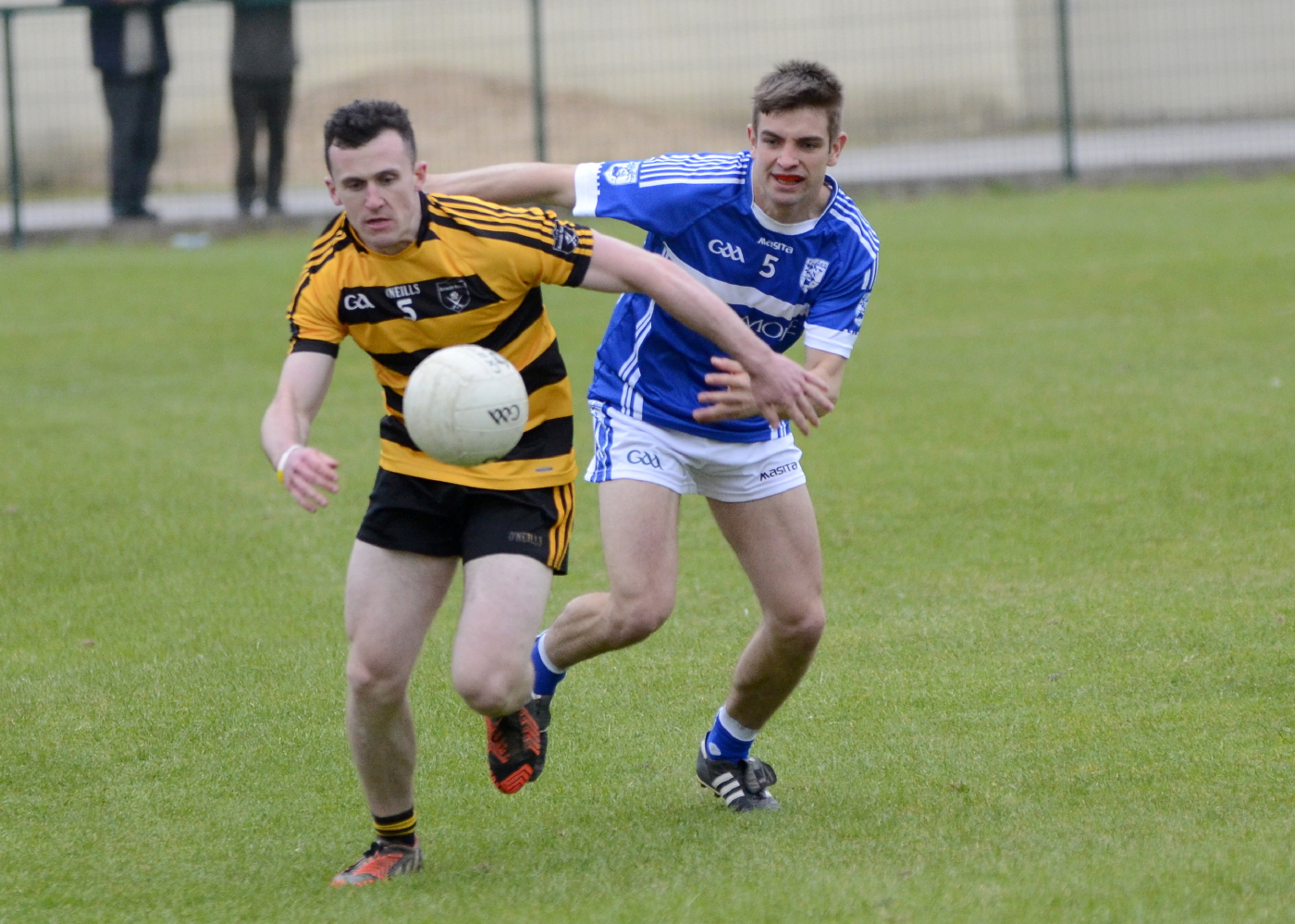 Chris Sheehan (Fethard) and Mikey O'Dwyer (Arravale Rovers) in a race for possession.

And in the most part they can thank their county player Donough Leahy whose brace of goals broke the hearts of Fethard. After punching home a high ball to the Fethard net in the 13th minute to level the game at 1-2 apiece; the Arravale centre-forward scored his second goal 15 minutes from time. If the first goal was scrappy enough, the second was superb, created by a sublime pass from substitute Darragh Coughan whose early second half introduction gave his side a much-needed lift. It was Arravale’s first score of the second period and it gave what looked like a beaten team at that stage the impetus to go on and win.

Fethard were still leading 2-10 to 2-7 with just five minutes to go but the experience of Arravale wore them down in the end, the Graham Lonergan managed team kicking five unanswered points to close out the game. James Hogan came to the fore when most needed accounting for three of those five late points. 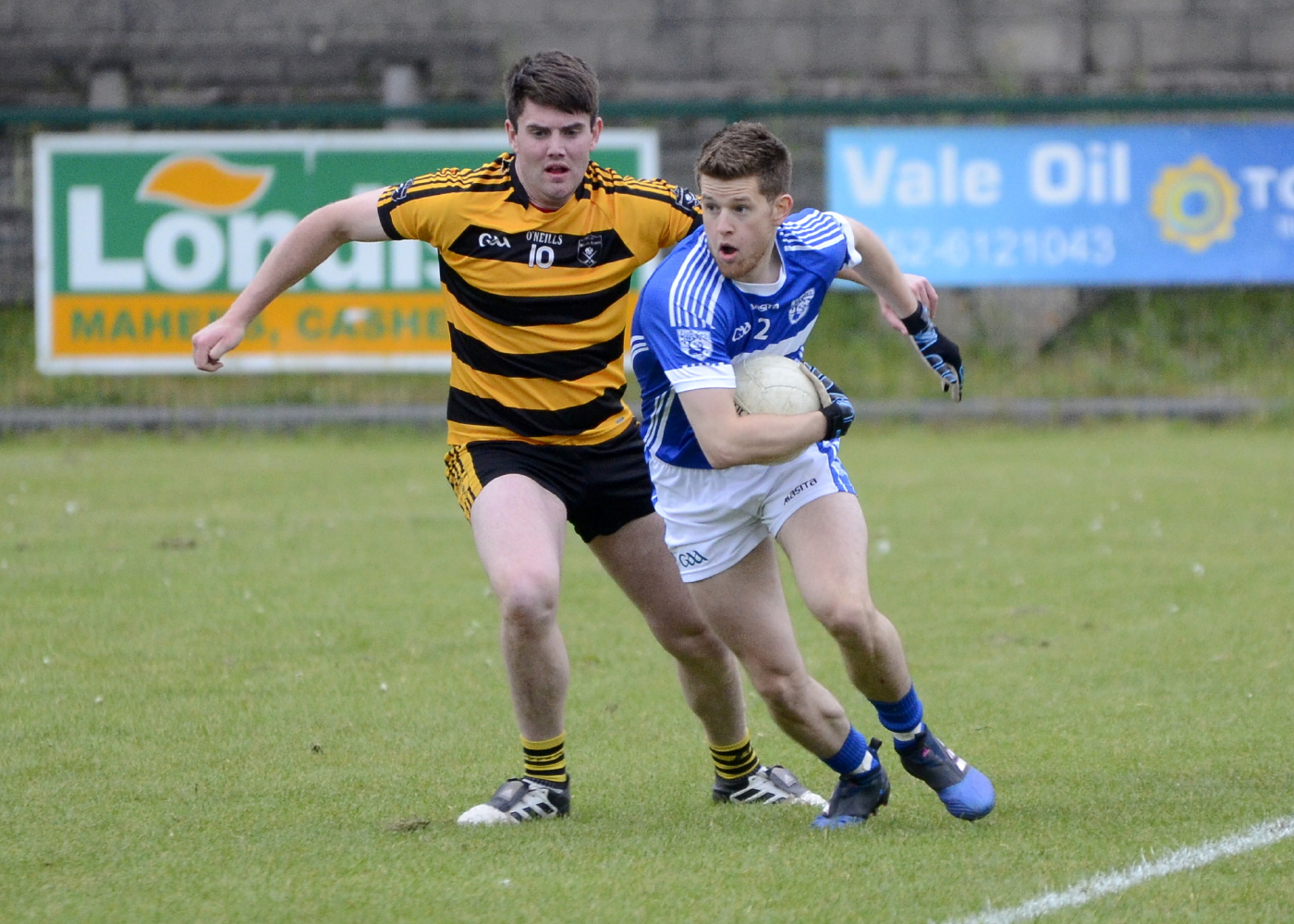 Gavin Fitzgerald, the Fethard full-back, gets around James Hogan (Arravale Rovers) in tonight's game at Clonmel.

Fethard after Jack Dolan had rattled the Arravale Rovers crossbar after just 20 seconds, got the goal they deserved just three minutes into the game, when Jamie McCormack got between full-back and goalie under a high ball to fist a goal.

While the South Division team trailed by 1-7 to 1-6 at half-time, they hit a purple patch at the beginning of the second period when they had 1-3 without reply; their second goal, similar in style to the first, this time Willie Morgan getting the final punch from a high ball into the goalmouth. But they were desperately unlucky when at the start of the second half a great move by David Hayes put Brian Healy through on goal but his effort smashed off the crossbar, and just when it looked as if Peter Gough was going to bang home the rebound, the Arravale keeper Timmy Dalton somehow got a block on it. Perhaps it was never going to be Fethard's night after all.

Both sides will reflect on this game very differently. Fethard will wonder how they let it slip and will also curse terrible luck at the commencement of both halves when they twice rattled the crossbar with goals on. The Tipperary Town side will breathe a collective sigh of relief and will know that a much improved performance will be needed for their remaining games in this group against Moyle Rovers and Aherlow Gaels.

Joedy Sheehan (Fethard) makes one of his many attacking runs from defence to get past Arravale Rovers' Kenny Hayes at Clonmel Sportfield tonight.