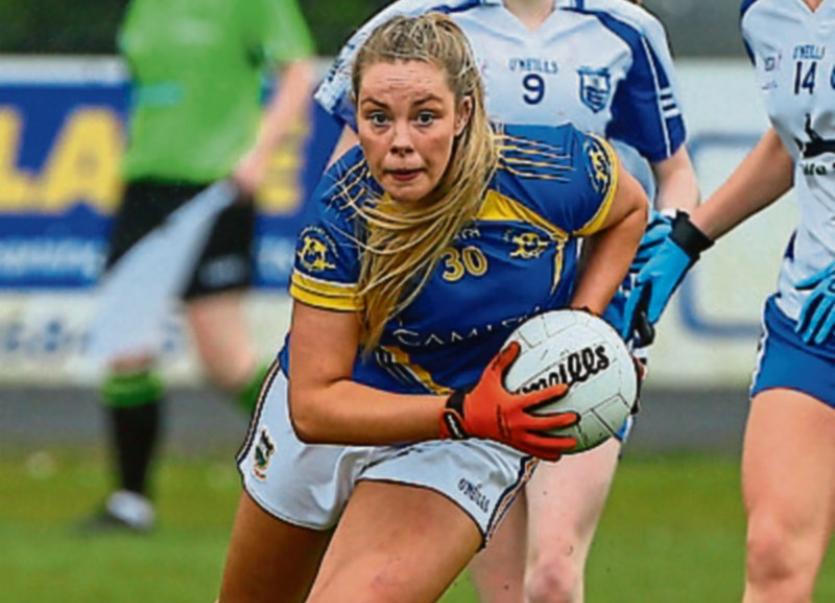 Aisling McCarthy was one of Tipperary's outstanding players in the win over Wexford.

AISHLING Moloney and Aisling McCarthy contributed 0-11 between them as Tipperary were crowned Lidl Ladies National Football League Division 3 champions on Sunday, winning 0-15 to 1-10.

Despite losing three players to second half sin-binnings, and finishing the game with 13 players, Tipp held out in an enthralling replay against Wexford at St Brendan’s Park, Birr.

Beaten finalists after a replay with Waterford last year, Tipp got over the line this time to secure promotion to Division 2.

And they had to do it the hard way, coming from six points down in the first half to hold on with two to spare.

Ultimately, it was a strong second half display from Tipp that ensured silverware for the Premier County.

Behind by 0-5 to 1-8 approaching the break, McCarthy’s point kept Tipp in touch at the interval, trailing by five.

They’d played against the wind in the opening half but opened the second half with seven unanswered points, as Wexford lost former Kerry star Bernie Breen to the sin-bin.

Tipp went from six points down to two points up with eight points in a row either side of the break, and they won the second half by 0-9 to 0-2.

After half-time, McCarthy knocked over two frees before Moloney hit three on the trot from play.

Gillian O’Brien put over a 41st minute point and when Moloney was on target again, Tipp moved 0-13 to 1-8 in front.

O’Brien was sent to the sin-bin in the 44th minute and when Maria Curley and Moloney followed, Tipp were down to 12 players.

Wexford’s long run without a score had finally ended in the 47th minute when Ellen O’Brien pointed and Catriona Murray’s levelled the game at 1-10 to 0-13.

Wexford were lucky not to concede a goal seven minutes from the end when McCarthy’s free dropped short before Roisin Howard forced a brilliant save from Mary Rose Kelly, who tipped the ball onto the post.

Wexford were reduced to 14 players late on when Sarah Harding-Kenny was sin-binned before O’Brien’s return brought Tipp back to 13.

And Tipp managed to find the crucial late scores to secure victory, McCarthy taking her tally to 0-5 with a brace of frees.

In the first half, it had looked positive for Wexford, playing with that strong breeze and frustrating Tipp with a packed defence, while breaking at pace.

Clara Donnelly was particularly dangerous for the Slaneysiders, with probing runs from deep, and captain Fiona Rochford showed up well again, after her last-gasp free ensured a replay.

With less than 19 minutes on the watch, a tight game was level at 0-4 each, after Wexford had led by three.

Orla O’Dwyer’s leveller for Tipp had forced a brilliant tip-over save from goalkeeper Kelly and Rochford’s goal in the 25th minute was another major fillip.

That goal helped Wexford to lead at the break but Tipp began the second half firing on all cylinders, and would eventually prevail following an incident-packed game.