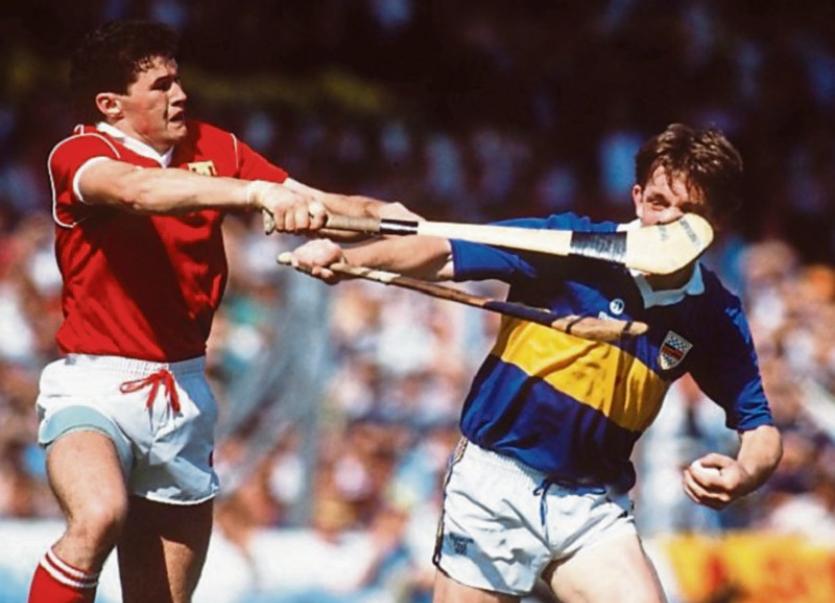 Denis Walsh and Nickey English in action in the Munster final between Cork and Tipperary in 1990 when Cork dethroned the reigning All-Ireland champions.

According to Denis Walsh, the former Cork dual star and  hurling manager from 2009 to 2011, Sunday’s Munster Championship game between Cork and Tipp won’t be as straightforward as what many pundits would have you believe.

The St. Catherine’s clubman, who won both senior hurling and football All-Ireland medals with ‘The Rebels,’ over a stellar career, thinks there  is a lot of positives in the Cork  set-up  now.

“They did well enough in the league this year and there is savage work being undertaken by this team in trying to restore Cork hurling to the top table. There was consistency this year and the management team are doing a good job overall,” said Denis.

“But then again, consistency is different  in Gaelic games today from what it was 10 or 20 years ago, in so far as you don’t get those lines of form carrying over from one year to the next anymore. It is all on the day now and how a team performs on the occasion. It will be like that in Thurles as ever between Tipp and Cork again this time.

“How can you explain why a team like Tipp, top dogs last year, and doing well in the league up to the final could go out and get beaten by 16 points? How could that happen? What happened last year, even last month, no longer carries with it what it once did in hurling or football. It is the performance on the day only that matters and whoever gets that  wins. It is as simple as that.”

“Cork are going in as underdogs in everyone’s eyes and that won’t bother them at all. But I wouldn’t underestimate them - and I don’t think Tipp will for a moment -but we have a forward department that is very strong in my opinion and if they get their act together, they can cause serious trouble for any team. Good forwards in hurling are hard to find and we have them now. I think if we can stay in the game then I think this Cork team have it in them to cause serious problems.

“We have a promising team again and they are certainly a lot livelier than in previous years. I can see they are quicker and  are hungrier too. They won’t be standing around  in Thurles,” he added.

“I see also  from following the media that in  the build-up to this game, there is no mention of Cork by anyone, and that suits just fine. We are getting zero mention in the media. It is Tipp, Kilkenny, Galway, even some for Waterford and Clare. But no mention whatsoever of Cork. There is no expectation and no pressure,” warned Walsh.

Denis went on to recall a famous game from his own playing days against Tipperary.

“You know there was another time when Cork hurling was down in the dumps and we came up against Tipp (1990). It was the famous occasion of the ‘Donkeys Don’t Win Derbys’ quote and when we beat Tipp, then All-Ireland champions  in Thurles.

“We were no hopers going into that game also and in fairness to ‘Babs’ he didn’t  exactly say that, but it suited us to misquote him at the time for our own benefit. What he did say was, and he was actually giving credit to Cork, when    acknowledging our underage successes  and said that ‘Donkeys Don’t Win Derbys’ to explain that we were well able to play hurling and to win.

“But no doubt we were certainly not expected to win that day but we had a savage hunger going out onto the field and the less hope we were given the hungrier it made us, the more it hurt us,” said Denis.

Before breaking into the Cork senior hurling panel in 1985 - he would win an All-Ireland senior medal in his first year on the team in 1986 - Denis’ first experience of Cork and Tipp was in 1984.

“Actually I first played against Tipperary in 1984, the Centenary Year of the GAA, not at senior level but at Intermediate. I remember it well with  the game  played in  Kilbrin, the home of Archbishop Croke. I was just out of minor  and got a call. I played in the forwards and who was marking me at corner-back   none other than Pat Fox. And we came out on top that day.

“But no matter at what grade it is, there is definitely something special in Cork v Tipperary games. While it mightn’t be what it was in generations gone by, there is a rivalry - no that mightn’t be the right word -  there is a special camaraderie in Cork and Tipperary in hurling; they bring out the best in one another. It is one game not alone in Munster, but nationally, that the neutral fan up and down the country wants to see every year - Tipperary and Cork,” pointed out Denis.

“We were reared on it at home and I remember those great days as a child going with my father. And especially when the games were in Thurles it was extra special. I can recall often stopping off in Morrisseys of Ballagh going to and from Thurles and the atmosphere and the banter. Those memories of great days last forever.

“My first encounter at senior with Tipperary was in 1987, in Killarney, for the replay of the Munster final. It was   ‘The Famine Is Over’ day for Tipp. We lost out that day but it was a magnificent replay.  I was involved in a few along the way from 1986 to 1996, especially some big ones in that period from 1987 to 1992,” he said.

After his  playing days  Denis became   involved in  coaching and some of his views are very interesting in the light of how the game has developed over recent years.

Besides managing the Waterford footballers for a stint, the St. Catherine’s and later Kildorrery clubman took on the role of Cork hurling manager in 2009.

“It was the time of the famous ‘strike’ and I was invited in around April or May 2009. Mind you it wasn’t by the County Board but rather a three-man panel appointed by the GAA.

“In those three years we came up against Tipperary three times in 2009, 2010 and 2011. The first year Tipp beat us by three points. Then the following year we gave Tipp a lesson in Páirc Uí Chaoimh in front of 44,000 people. And what happened then only that Tipp went on to win the All-Ireland. I would like to think that if we hadn’t done that to them   they wouldn’t have won the All-Ireland in September,” added Denis.

“The following year, my last in charge, they again beat us by three points. And this is it really, there was only a puck of a ball between us any day (2010 excepted), three or four points in it in 2009 and 2011. And more often than not that’s   all that separates the teams any day and I don’t think it will be any different, this time around,” he said.