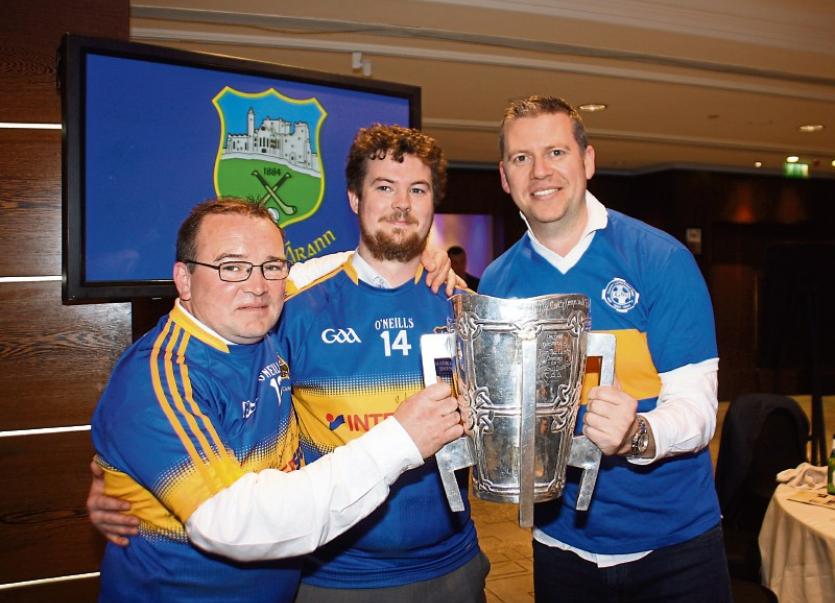 After an absence of a year, London’s West End was the location once again for another very successful Tipperary GAA fundraising Corporate Lunch last Friday afternoon, when almost 300 supporters and friends enjoyed another unforgettable social occasion.

The opulent InterContinental Hotel, just off Park Lane near Hyde Park Corner, was the venue for another stylish and spectacular function hosted under the Blue and Gold banner, less than five months after the London Tipperary Assocation feted the All-Ireland champions in the city.

And from a fundraising viewpoint the novel idea of Corporate Lunch, co-ordinated by London-based Clonmel men Brian Acheson and Kevin Leahy, supported by a hard-working committee was another outstanding success.

And the man who played yet another blinder during a memorable afternoon was Annacarty man, broadcaster and MC Paul Collins from Today FM, who co-ordinated a very lively and entertaining Question and Answer Forum among the special guests before he proved to be a very effective auctioneer.

The Team Tipperary’s afternoon’s fundraising was for the development of the county’s new state-of- the-art Centre of Excellence based at Dr. Morris Park in Thurles .

Michael Bourke also thanked the generous sponsors and all the people behind the scenes for organising the event and singled out Clonmel man Brian Acheson for special mention.

Brian, who is also the CEO of Dornan Engineering, has been the driving force behind the success of this and the two previous events but he will be the first to admit that he also has a very strong committee supporting him.

After enjoying a splendid meal it was time for MC Paul Collins to take to the stage and invite the special guests to join him in a chat show format while he put questions to them and entertained the diners.

There was plenty of interaction and humorous banter with the audience throughout the afternoon.

An enjoyable event concluded just after 5pm with the fundraising auction of Tipperary GAA memorabilia.