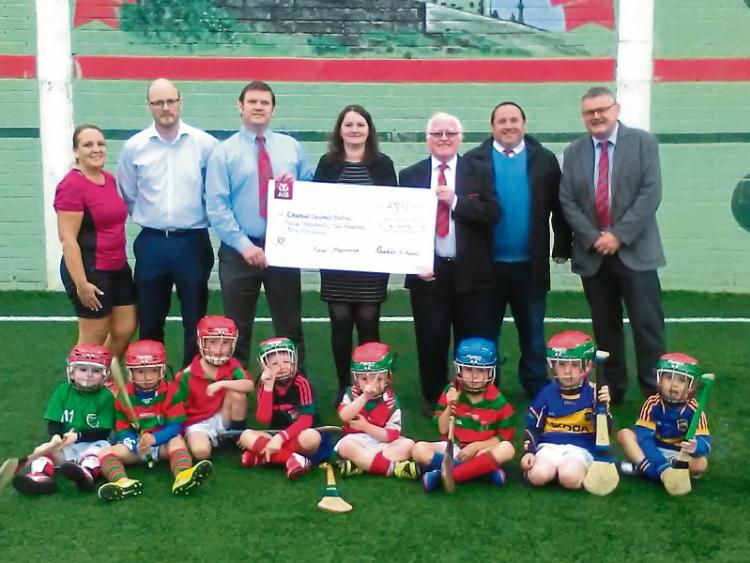 Antoinette Kelly, Community Fundraising Manager, Crumlin CMRF, attended Leahy Park on Monday, May 29, to thank the Club for raising more than €12,000 in our May Bucket Collection.

Antoinette outlined the projects CMRF are currently undertaking with the help of the money raised.

Cashel King Cormac's have now raised €40,000 for Crumlin CMRF in the last three years. Antoinette presented the club with a medal acknowledging our achievements.

Our u14 Football Team lost out to Aherlow Lattin after extra time in the West Plate Final at New Inn on Friday, June 2.

A bright start saw Cashel ahead 1-1 to no score thanks to Corey Hynes. Points were added by Herman O'Donoghue, Donal Ryan and Oisin O'Donoghue. Cashel lead by four points at halftime, 1-4 to 0-3. Aherlow Lattin then scored a crucial goal and added two points early in the second half. Two excellent David Clarke frees put Cashel ahead but Aherlow Lattin equalised in injury time.

In extra time Aherlow Lattin scored 1-1 in the opening half and Cashel were unable to recover going down bravely by four points. We congratulate Aherlow Lattin. Ross Minogue deserves special praise for a superb game between the posts. The boys now have the Regional Feile in Pearse Park Stadium, Galway to look forward to, on June 17.

The footballers enjoyed a good win over Eire Og on a scoreline 2-12 to 1-3. The boys played some lovely football and were full value for the victory and will be hoping to go on good run in this championship. The team were well served by Kevin O'Sullivan, Sean Ryan, Michael Morrissey, Pj Mooney, Lee Burke, Mickey Coleman and John P Peters on the night.

Cashel KC Vs Arravale Rovers Next Sunday in Dundrum at 3pm, please support.