Tipperary footballers leave a great chance behind them in Cork 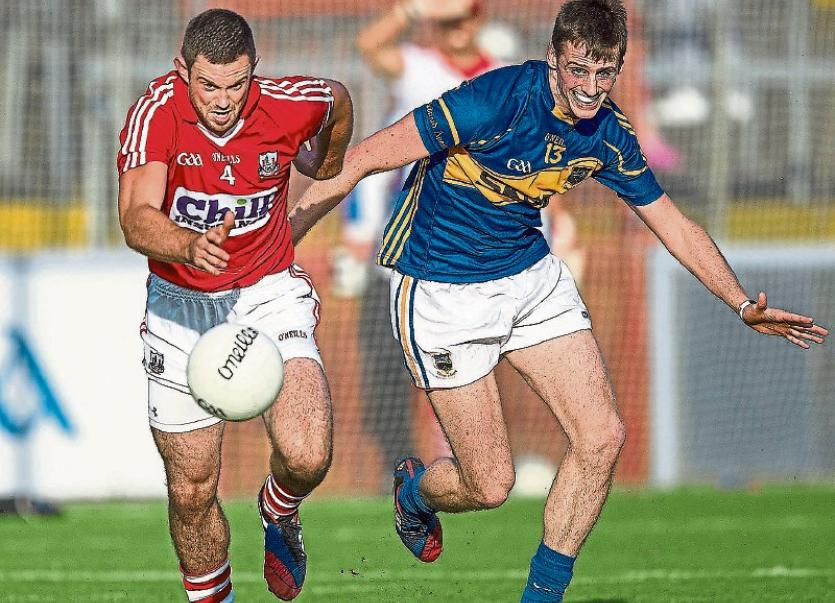 Conor Sweeney who scored 1-5 for Tipperary was a deserving winner of the man of the match award.

The bottom line at the end of  a very strange Munster Senior Football Championship semi-final at Páirc Uí Rinn on Saturday evening last was that Tipperary failed to take a glorious opportunity which presented itself to beat Cork.

And now as  Tipperary are forced to look ahead to the qualifiers, they will know deep down that, as admirable and brave as their efforts were against ‘The Rebels’, they ultimately can only blame themselves for losing the chance of putting back-to-back semi-final victories together against a disappointing home side.

Seriously depleted of first choice players through injury and suspension before the throw-in, Tipp manager Liam Kearns’ side still put in a powerful first half performance that saw them lead, against a strong breeze at half-time, by 0-4 to 0-1.

It was a remarkably strange opening 35 minutes, which saw Cork open the scoring with a point inside three minutes and then fail to score for the remainder of a half in which they were simply awful. It was a period also when despite the loss of All-Star Michael Quinlivan after 18 minutes, Tipperary should have gone on to lead by more than just three points at the break, such was their stanglehold on the game.

On nine minutes Conor Sweeney had his first score of the game to give Tipp the lead, and shortly after his introduction Liam McGrath put Tipp 0-3 to 0-1 up in the 20th minute.

Our fourth and final score of the opening period came just before the break when Robbie Kiely squeezed home a point under pressure.

Going in at the interval Tipp were in a solid position against a troubled Cork side who already had used two substitutes without any real improvement. It got better for Tipp when ‘man of the match’ Conor Sweeney slotted over two excellent quickfire points within 75 seconds of the resumption for an 0-6 to 0-1 lead as Cork fans watched with their mouths open wide.

Thereafter the game changed utterly and quickly though and led by their captain Paul Kerrigan Cork kicked six unanswered points in 13 minutes to edge back in front for the first time since the game’s opening score.

The Rebel renaissance primarily came from a change of tactic, a push-up on the Tipp kick-outs and a dominance around the middle as the Cork midfield took control. It wasn’t that there was anything wrong with Ciarán Kenrick’s kick-outs it was just that the possession whichTipp were  gaining in the opening half, especially from George Hannigan, had almost totally disappeared. Cork made their possession pay. Tipp replaced both midfielders, Casey and Hannigan, but little if anything changed.

Tipp had one glorious chance during that period when debutant Liam Boland ran through the middle and with a point at his mercy decided to go low, but his effort was well saved by Ken O’Halloran. A green or even a white flag at that stage would have been a confidence boost as Cork were beginning their period of ascendancy.

Conor Sweeney’s third point of the second half (after a great run by another debutant Shane O’Connell) restored parity at 0-7 apiece half-way through the second half. Six minutes from time a superb Kevin O’Halloran point, after good run by Robbie Kiely, had Tipp trailing by just the minimum at 0-10 to 0-9 and still very much in the hunt.

Then came what seemed a match-winner for Tipperary when after a long delivery by substitute Colm O’Shaughnessy, Conor Sweeney got his fist to the high ball in between two Cork defenders and the goalkeeper to give Tipp a two points lead in the 69th minute. Tipperary would never get a better chance than this of upstaging Cork in their own backyard.

But within a mere 33 seconds, before jubilant Tipp fans had settled back in their seats, the dream was shattered. From the resultant kickout the ball was moved at speed from Michael Hurley to James Loughrey to Mark Collins and finally to Luke Connolly who applied the vital soft touch past Kenrick to break Tipp hearts.

How and why this was allowed to happen will haunt Liam Kearns' side for many a day to come. Untouched the length of the field, surely as the danger developed, by hook or by crook, the move should have been stopped. A black card, a pointed free, whatever, it would have given Tipp the chance to protect a one point lead in that scenario as against chasing a game deep in added time. We than could have put the ball up our jumpers as Cork understandably did and let the clock tick down. We were that close to recording an unlikely and amazing win.

The defeat was all the more galling in that Tipperary had, to their great credit, created the platform themselves through a bossy first half when they were by far the more composed and better team. The half-back line of Robbie Kiely, Bill Maher and Jimmy Feehan all put in great shifts in that period and behind them, Shane O’Connell and Alan Campbell used their wings very effectively. The Tipp defence held Cork to 1-10 with disciplined and solid defending - Cork had but one converted free over the 70 minutes.

George Hannigan was excellent in the first half but ran out of steam before being replaced by former hurler Kieran Bergin on 56 minutes.

Upfront Liam Boland and Liam McGrath contributed points, the former can be well pleased with his game before being eventually replaced.

Conor Sweeney with 1-5 was well worthy of his man of the match award, the Ballyporeen man’s 1-5 from 1-9 testimony to his importance to this side.

Short the likes of Evan Comerford, Philip Austin, Ciarán McDonald, Jack Kennedy, Ian and Kevin Fahey, Willie Connors, Emmet Moloney before the start, the loss of Michael Quinlivan half way through the first half with an ankle ligament injury was the last thing Tipp needed. In fairness they kicked on to the break despite the huge loss of the influential Clonmel Commercials player.

But ultimately as the game wore on the absence of such first team choices came home to bit. Choices around the middle in particular were missed where options like Quinlivan, Jack Kennedy, Ian Fahey, could have challenged Cork's dominance, not forgetting Tipp had already lost last year's captain Peter Acheson. That Tipperary were where they were against Cork in Cork so late in the game was a credit to all on the field, all 21 of them.

There will be other issues to address to as we prepare for the qualifiers. We kicked but one free all day (as did Cork) and perhaps had O'Halloran started might we have been further to the good at the break, as three kickable points went abegging in the first period.

And perhaps debutant Diarmuid Foley who never really got into the game might have been better used late on as the space and game opened up.

Plenty to think about for Tipp as they now await the qualifier draw and a game on Saturday, 8th July. Hopefully also our injury situation will have improved significantly by then.