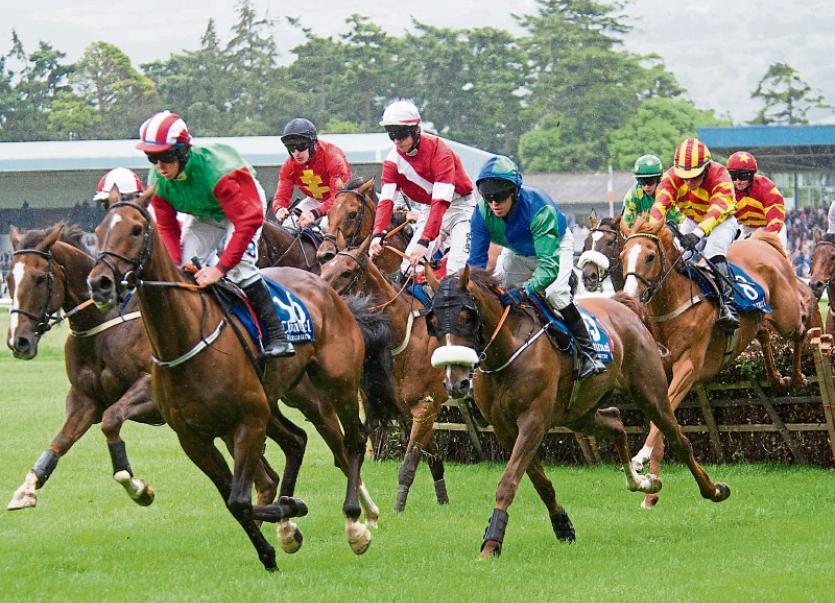 Horses clear the third flight of hurdles in a race won by Bective Cave (left) at Clonmel last Friday evening.

One of the biggest crowds hosted by Powerstown Park in recent times turned out last Friday night for the season finale and enjoyed some fine racing provided by the sport’s biggest names.

Davy Russell hasn’t always enjoyed the best of evenings in Clonmel but he will remember this year’s barbecue night for some time after riding a treble, taking three of the first four races.

The opener was Dawn In The Park (7/4 favourite), trained by Joseph O’Brien who’s already racking up a good record at the track and Russell scored again in the third, the Orchard Thieves Handicap Hurdle, with Just Janice (7/1) outstaying Steamboat Quay.

That winner was trained by Dungarvan-based veteran John Kiely, who couldn’t make it on the night, while Meath handler Peter Casey sent down the winner of the other big race of the meeting.

John Kennedy Motors (Toyota) have been associated with Clonmel Races for a few years now and it’s a sponsorship that’s proven high quality for track, sponsors and winners alike.

Worth €15,000 in all, the John Kennedy Motors (Toyota) Clonmel Beginners Steeplechase is one of the highlights of the year at Powerstown Park and this year’s victor Eight Till Late’s form was well advertised in advance, as he was second in a decent handicap hurdle at Punchestown last time around.

Steered by Andrew Ring, the 5/2 joint favourite went clear at the second last and romped home by four and a quarter lengths, the only drawback the absence of the colourful trainer who is in poor health at the moment.

Meanwhile, the third of that Davy Russell treble came in the race before that and had “plot” written all over it, trained as it was by Charles Byrnes. Not for the first time when this duo was involved, the money came on Sea Light and he started 13/8 favourite. Patiently ridden all the way around, he looked nailed-on when going clear two out but backers endured a nervous few moments when Master Appeal loomed near the line. The post came just in time for Sea Light as he held on by half a length.

This meeting at Clonmel is as popular for the social side of things as it is for the racing and while the weather didn’t do anyone any favours this time around, it still attracted plenty of style, while the barbecue went down a treat.

“The best dressed dressed ladies had to cover up a bit but they’ve made a great effort,” racecourse manager DJ Histon said. “It’s a nice crowd, sales were good, and the horses have produced fine fare.”

On hand to judge the style competitions were this year’s Tipperary Rose, Sheila Ryan from Toomevara, and former Mr. World Kamal Ibrahim who was making a return.

After much deliberation, they eventually plumped for Paula McCormack from Glengoole as best dressed lady and Ian Scanlon from Newcastlewest as best dressed gent, both of whom went home with prizes worth over €500 courtesy of Orchard Thieves Cider.

Back on the track, other winners on the night were Bective Cave (10/1) in the second, another trained in Meath by Matthew Smith; Dark Outsider (4/1 favourite) trained by Cork-based James Dullea and ridden by Danny Mullins in the Clonmel Show Sunday 2nd July Handicap Chase; and local runner Like An Open Book, trained and ridden by John Burke, who was on his first winner since 2004 and at nice odds of 20/1 in the bumper.