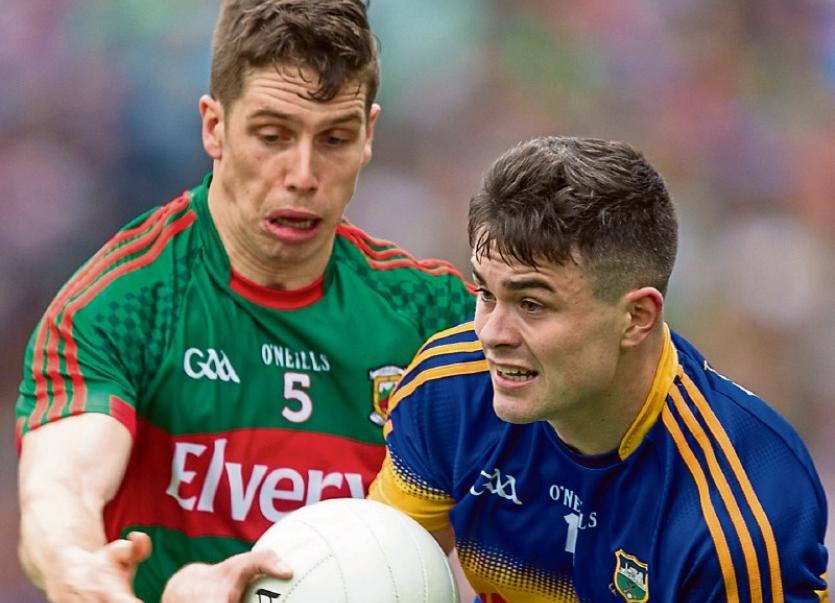 Michael Quinlivan holds off the challenge of Footballer of the Year Mayo's Lee Keegan in the All Ireland semi-final last year.

ALL-star forward Michael Quinlivan will miss out on Tipperary’s round 2B qualifier clash with Cavan at Kingspan Breffni Park on Saturday week.

Coach/selector Shane Stapleton has confirmed that Quinlivan won’t have recovered in time from the ankle ligament damage sustained in the Munster semi-final loss to Cork – while corner back Shane O’Connell is also unavailable after he picked up a stress fracture in his foot in the same game.

On the plus side, midfielder Jack Kennedy is back in training while Kevin and Ian Fahey from Clonmel Commercials have resumed light work.

Emmett Moloney is also back in contention for a starting place but Willie Connors was injured on U21 hurling duty with Tipperary against Limerick last week, and is another absentee.

Tipperary’s backroom staff are also monitoring the fitness of Liam Casey, Robbie Kiely, Bill Maher and Liam Boland, who picked up knocks in the Cork game.

Stapleton explained that mentors have adopted a “cautious” approach with those four players, while former International Rules player Ciarán McDonald is a long-term casualty with a recurrence of his long-standing hip problems.

There’s also concern over former senior hurling panellist and 2016 All-Ireland winner Kieran Bergin, who hasn’t trained since the Cork game due to a hand infection.

Quinlivan’s loss during the Cork game was a fatal blow to Tipp’s chances of winning at Páirc Uí Rinn, as the team was deprived of a lethal forward option from the 19thminute.

As the hosts gained a firm stranglehold around the middle of the field in the second half, Quinlivan could also have provided a calming influence in this sector, with his high-fielding ability.

Stapleton explained: “Michael is the silent assassin. He doesn’t say a whole lot in the dressing room but when he does come up with something, it’s A1 and perfect stuff.

“He’s a big kick-out option and even if he’s not playing well, opponents will play two on him or a sweeper and change their team up to counteract him.

“We have to take it on the chin and if we could get a win against Cavan, he might make the next game.

“Hopefully his season won’t be over for us but we have quality there. Conor Sweeney is playing well and Liam Boland.

“We’ll put the shoulder to the wheel now and see if we can get four or five of the six forwards flying. If we do that, we’ll take stopping up there.”

Tipp’s trip to Cavan will revive memories of their famous qualifier victory over Derry at the same venue in last summer’s campaign.

But Stapleton admits that drawing Cavan on their home patch is a difficult task.

He said: “We expected it, to be honest, the way things were going.

“We nearly expected Armagh away, for a repeat of the promotion decider.

“We’re not surprised. At no stage did we think we’d get a home draw against one of the Division 4 sides, it’s just the way the year has gone.

“We knew we’d have another big challenge to face. It’s back up to where the journey back last year in Cavan. We have good memories from there and it might revive our season again.”