A wonderful weekend of success for Tipperary underage footballers 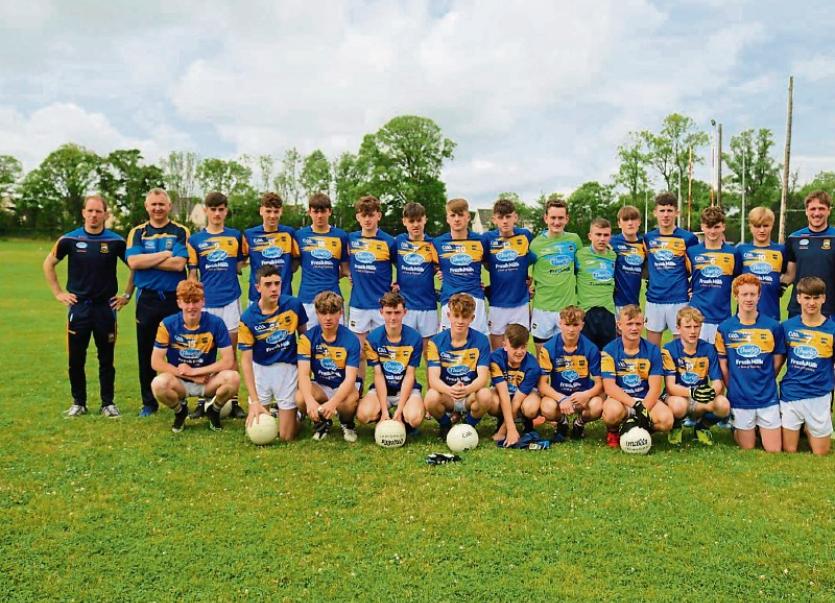 The Tipperary under 15 footballers who won the Plate.

What a wonderful weekend it was for Tipperary football.

In addition to the seniors' great win in Cavan, there was more sucess at underage level to ensure that the assembly line of football talent is still working well.

The Tipperary under 14s  put in  magnificent displays to win the Munster Cup while the under 15s explosive attack saw them recapture the Munster Plate also won last year.

The under 16s also played well without taking home any silverware

In a sun drenched Waterford on Saturday, Tipperary’s U14 footballers won the Jim Power Cup for the first time in 7 years in impressive style.

These group games were played in the grounds of Abbeyside Ballinacourty GAA Club in Dungarvan. For the final of this Munster competition the action moved to the picturesque grounds of Bricky Rangers GAA club, five miles east of Dungarvan town, with South Kerry the opposition.

The Tipperary boys took control of the game at the outset and by the end of the first  half had raced into a comfortable 4-2 to 0-2. The Kerry outfit had no answer to the power and pace of the Tipperary contingent and when the final whistle went Tipp had won on a scoreline of 5-5 to 0-5.

To jubilant scenes and in front of a sizeable contingent of Tipp supporters, team captain Jack Leamy accepted the Jim Power cup on behalf of a determined and talented bunch of Premier County footballers. 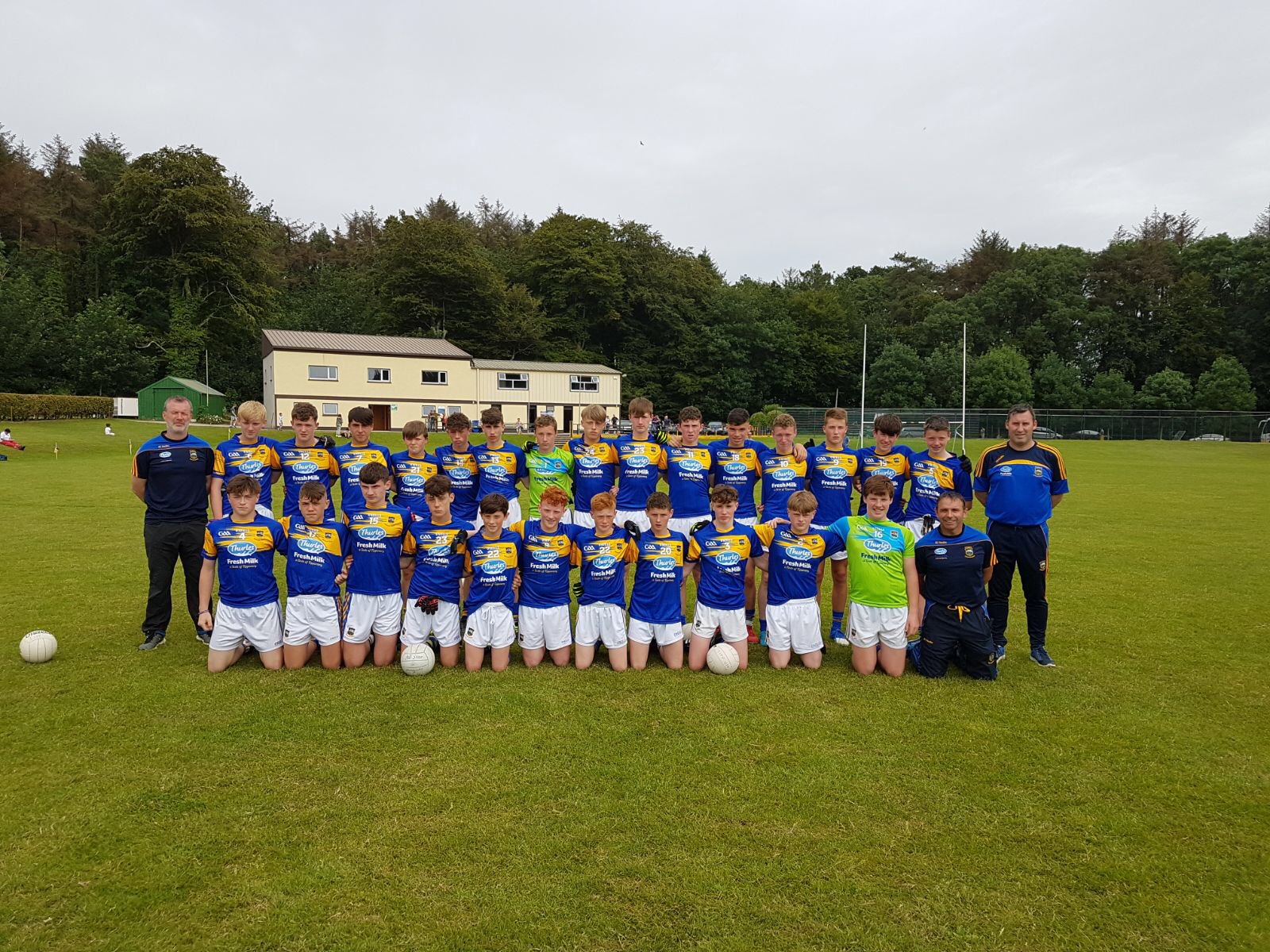 The successful Tipperary u-14 panel in the Jim Power Tournament.

Over the course of the four games all of the group made a big contribution with the team’s defensive strength and their abilty to create goal opportunities being particularly noticeable. In total, over the four games they scored an impressive 18 goals and 27 points. This is a talented bunch, with many dual players, drawn from all corners in the county and if they can stay together as a group can challenge for additional footballing honours in the years ahead.

This turned out to be a great learning experience for all who travelled to Cork.  A tough game against Kerry North saw the team adjust their approach in the Plate semi-final against Limerick, Tipp 2.3 Kerry North 0-14.

This adjustment transformed the team as they took an early lead and would never trail . The team were explosive when on the attack with an unstoppable hunger for goals, Tipp 5.6  Limerick 0-5.

A first competitive win sent this group confidently onto Millstreet for the Plate Final. Two early Cork points did little to dent the team's confidence and a lightening quick goal put them ahead and while Cork levelled with a point, another Kyle Shelly goal put Tipp  ahead for the remainder of the game, half-time read 3.2  to 06.

The fact that no goals were conceded all day can’t go without mention as Cian O’Mahoney was immense along with his goal kicks. The final result was by no means flattering to this group Tipp 4.8  Cork 06 giving Captain Jamie Holloway the opportunity to collect the Plate. 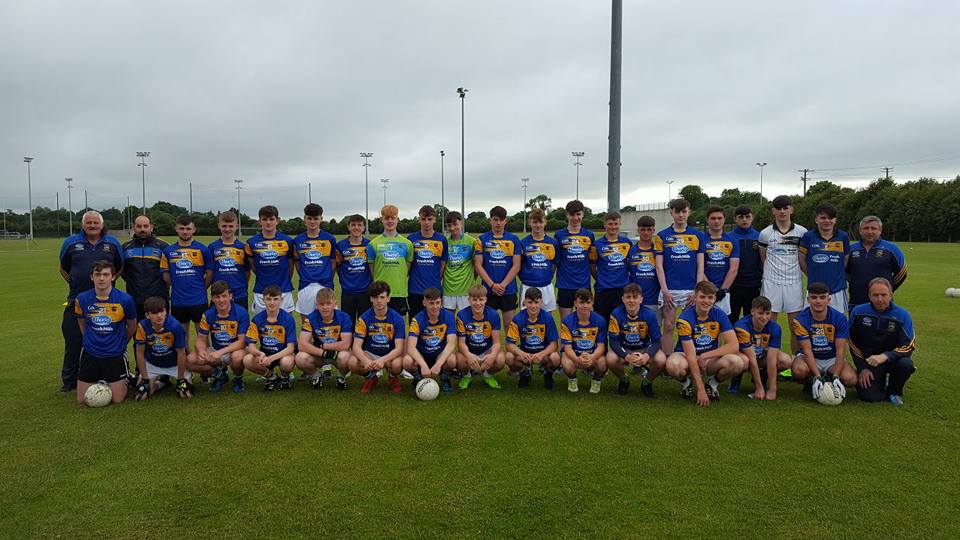 The Tipperary under 16 football team.

The  u16 team travelled to Rathkeale with great hope after lots of hard work by all boys and mentors but preparations were not ideal with the tough schedule young players face.  Tipp played Clare in the first game in a very tough and physical game as they  knew it would be. The boys stood up to the challenge and came out on top on score line of 0.16 to 1.9.

That put them into the Cup semi final v Limerick and in a great game of football with both sets of backs defending as if their lives depended on it, scores were very hard to come by and the sides were level at half time.  The second half was a ding dong battle with nothing between the sides but Limerick scored two late points to come out on top on score line 1.10 to 0.12