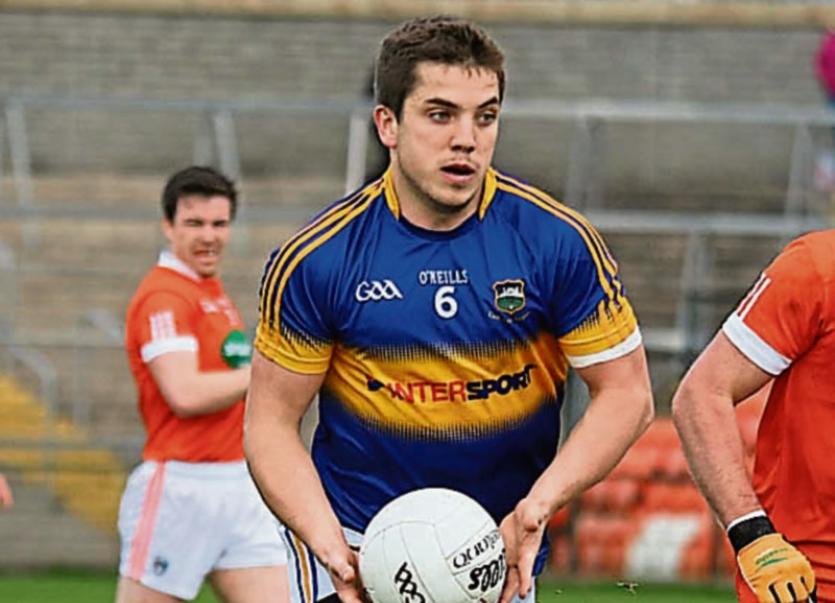 One of the stars of the win over Cavan, Robbie Kiely will be hoping for another good performance when the Tipp footballers take on Armagh in the All-Ireland Championship qualifier this Saturday.

If a week is a long time in politics then it must be an eternity in sport.

This time last week the Tipperary hurlers were facing an All-Ireland qualifier against Dublin on the back of an unconvincing display against Westmeath the previous weekend, while the county's footballers were preparing to send a patched-up side to Cavan for an All-Ireland Final qualifier in which they were given little chance of success.

However both teams lifted the mood of the county with tonic victories that will boost their confidence ahead of the next stage of their respective championships.

Drawn at home to Armagh in the third round of the qualifiers,the footballers will entertain the Orchard County in Semple Stadium at 5pm this Saturday evening, a game that will be shown live on Sky Sports.

The hurlers, meanwhile, will play Clare in the All-Ireland Championship quarter-final on Saturday week, July 22nd, the first major fixture to be staged at the redeveloped Pairc Ui Chaoimh.

The throw-in is at 3pm and the match will be shown live on RTE.

Tipp's defeat of Cavan in the All-Ireland Football Qualifier was one of the results of last weekend. They were six points behind at half-time, when it seemed they were heading for an early exit from the championship.

However the team once again demonstrated its unquenchable spirit with a remarkable turnaround that saw them win by three points, 2-15 to 0-18.

"It's a fantastic achievement by the players to get into the next round and, if we get over that, then we'd have a two-week break and we could become dangerous", said manager Liam Kearns.

The half time introduction of Philip Austin, and an appearance in the second half by All Star Michael Quinlivan, gave the side a real shot in the arm as Kingspan Breffni Park, the scene of last year's qualifier win over Derry, once more proved a happy hunting ground.

“Philip Austin hasn't played in four months but he was superb in the second half”, said Kearns.

“He started to run at them and they weren't able to handle it”.

“Michael Quinlivan's injury is a six or seven-week injury and it was only last Thursday he felt there might be ten minutes in him.

We knew he couldn't come outside the square really, but he gave the boys a lift coming on”.

Now Tipp will have little to fear when facing an Armagh team that they've already beaten this year - in Armagh - en route to winning promotion to Division 2 of the National League.

The Tipp hurlers, meanwhile, are preparing for a first meeting with Clare in the championship since the 2011 Munster semi-final, a game that Tipp won by 4-19 to 1-19.

They resurrected their campaign last Saturday with a heavy defeat of Dublin in the qualifiers and manager Michael Ryan is impressed with the way their momentum is building.

"What we wanted to do was to get these guys into the groove again, get them playing hurling and get them a little bit more ruthless, and they certainly showed glimpses of that out there today", he said.

The 6-26 haul that they finished with was Tipperary's biggest score in the Senior Hurling Championship in 92 years, since they scored 12-9 against Antrim in 1925.

The Tipp full forward line especially had a field day at Semple Stadium on Saturday, scoring 5-17 between them.