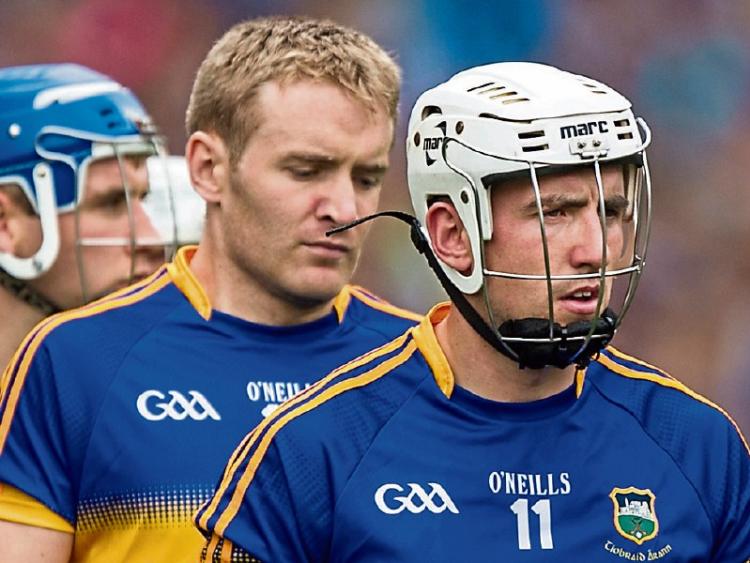 Noel McGrath and Patrick 'Bonner' Maher are part of a free scoring Tipperary attack that has scored 9-98 in four championship games, an average of 2-25 a game.

Tipperary are where they wanted to be at the start of the season, in an All-Ireland Senior Hurling Championship semi-final and playing in Croke Park in August.

That catchphrase has been repeated throughout the county since Tipp beat Clare in the quarter-final almost a fortnight ago.

And it's one that rings true, all the more so considering the course that their championship season has taken.

Leinster champions Galway, the current favourites to lift the Liam McCarthy Cup, provide the opposition in Sunday's semi-final at GAA headquarters, which gets underway at 4pm.

It's the third year in-a-row that the counties have met at this stage, with one win apiece in the last two years. It's also the fourth successive year that they've clashed in the championship, with Tipp winning a qualifier in Thurles in 2014.

Before a ball was pucked in anger the general expectation was that Tipperary would again take the direct route to the last four by winning the Munster Championship, but that plan was rudely interrupted by a rejuvenated Cork side in May.

Since that surprise defeat they have rebooted with wins over Westmeath, Dublin and Clare to arrive at the business end of the championship.

Now in the final stages of preparing for their ninth All-Ireland semi-final in the last eleven seasons, Tipp are attempting to retain the All-Ireland Championship for the first time since 1965.

By any standards theirs has been an unusual campaign. They have played four championship matches so far; but apart from the demolition of Dublin in the qualifiers and for spells against Clare, they have been a pale shadow of the side that won all five championship games last year en route to claiming the All-Ireland title.

Could it be that their best displays will be reserved for their return to Croke Park, and that their performances will peak at just the right time?

Manager Michael Ryan certainly believes that they are now arriving at "the right tempo" for the championship, and that his side is growing in confidence.

Some Tipp supporters, however, need more convincing, if the reaction to the display against Clare is anything to go by, when there was no great optimism that the team would be climbing the steps of the Hogan Stand next month.

The expectation levels of those supporters are always notoriously high, but in this instance those concerns are well founded.

The collective displays don't quite have the same spring in the step that they did twelve months ago and the team isn't playing with the same sense of unity, fluency or purpose. Some players have struggled for form and the difficulties in defence have been well documented.

Those problems in front of goal led to a chorus of calls for the recall of prodigal son Cathal Barrett to the fold. The Holycross defender injured his knee in the defeat by Cork, which was followed by the shock announcement that he had been dropped from the panel for disciplinary reasons.

He returned to action with his club Holycross/Ballycahill the weekend before last in the Cahill Cup senior hurling final, a match in which Holycross were beaten by Drom/Inch by a point.

However Michael Ryan has since stated that no players will be added to the panel for the remainder of the season.

Barrett's return was seen as the ideal solution to those issues in the full back line, in a situation where he would slot into his accustomed corner position, with the impressive Donagh Maher in the other corner and either James Barry, another current All Star, or Tomás Hamill at full back.

A team obviously needs its best players for the cut and thrust of the championship and Barrett certainly falls into that category.

His tenacity, ball-winning ability and distribution earned him an All Star last year and he has been a consistent performer since being crowned Young Hurler of the Year three years ago.

However on this issue the judgement of Michael Ryan and his backroom team, who of course know their players better than anyone, will have to be trusted, and their decision is sure to have been made in the best interests of all concerned.

Disciplinary issues aside, it's also doubtful if the Holycross player would have the level of match fitness required for such a major test.

If question marks are hanging over over the backs, then they appear to have no such concerns about the attack.

Against Clare Jason Forde, Steven O'Brien and Niall O'Meara impressed as impact subs, when Forde and O'Brien contributed points, while another young forward, Mark Kehoe from Kilsheelan/Kilcash, a star of last year's All-Ireland Minor Championship success, has also been added to the panel.

The team has scored 9-98 in four championship games, which represents a healthy average of 2-25 per game. Of the 0-28 clocked up against Clare, only five points came from frees.

Supporters will be hoping that whatever problems are encountered in defence can be offset by running up another big tally at the other end.

Even if the displays haven't always been of the highest quality, Tipp have built momentum with those wins over Westmeath, Dublin and Clare, which were achieved over a three-week period.

It's surely an advantage to approach a game of such importance as Sunday's with the benefit of that competitive match experience.

Galway, by contrast, haven't played a competitive match in five weeks since defeating Wexford in the Leinster Final. An impressive performance in that game saw them home by 0-29 to 1-17.

One of the best aspects of the display was their ability in the air and the terrific catches made by Conor Cooney, Niall Burke and Joseph Cooney in attack, while wing back Padraic Mannion and full back John Hanbury also proved themselves more than capable of winning possession.

Crucially, Galway aren't over-relying on Joe Canning to the extent that they did in the past; no longer can they be accused of being a one-man team.

Despite the great strides that they've made since the turn of the year, Wexford were never genuine All-Ireland contenders but they represent the strongest opposition that Galway have faced this year.

Therefore, to date in the championship, Galway haven't faced the most rigorous of examinations.

Irrespective of the quality of the opposition they faced in Leinster, Tipp saw up close what they were capable of when the Connacht side hammered them by 16 points in the National League Final in April.

Galway's big, strong team caused Tipp no end of problems on a day when corner forward Conor Whelan was outstanding, scoring five points from play, while Jason Flynn scored 2-1 from play in the 3-21 to 0-14 win.

Tipp sorely missed the injured Seamus Callanan but his presence alone wouldn't have saved them from defeat.

However the heavy training session that Tipp had five days before the game - two days after they beat Wexford in the semi-final - has to be factored into the equation, with the suggestion that it left the players tired both mentally and physically.

The Tribesmen have another Tipp connection in Lukasz Kirzenstein, the highly-rated strength and conditioning coach who played a key role in last year's All-Ireland success.

Winning primary possession and dealing with Galway's physical and aerial threat will be key if Tipp are to reach their fifth All-Ireland Final in the past nine years.

Their workrate from previous games had improved against Clare, and they stood up well to the challenge when Clare came with that late surge.

It's also the first championship game this season that Tipp will enter as underdogs.

That might just help tilt the advantage in their favour against a Galway side that has been widely tipped to end the county's 29-year drought without an All-Ireland title, and which will carry a considerable weight of expectation into Croke Park on Sunday afternoon.

Sunday’s match starts at 4pm and the referee is Westmeath’s Barry Kelly.