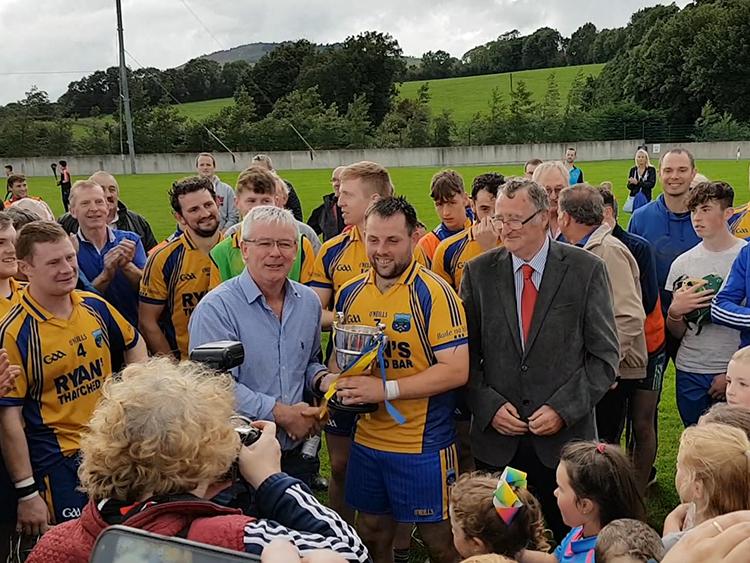 Donnacha McGrath captained Ballinahinch to back-to-back North Tipperary Intermediate Hurling Championship titles at Templederry on Sunday evening when the defending champions got the better of Moneygall with four points to spare.

Alan Kelly and Marcus Ryan were outstanding for the champions and although Shane McGrath appeared a class apart on the field of play the spirit of this Ballinahinch team was probably best encapsulated by the determined play of wing-back John Foley.

Moneygall, who featured outstanding displays from Brendan Toohey and Joe Fogarty, raced into a four-point to no-score lead inside the opening two minutes, but Ballinahinch fought back superbly and led 0-12 to 0-10 at the break despite having hurled into a significant breeze. Moneygall will surely regret their performance in the opening half - during that period they conceded ten frees. Indeed, during the course of this contest Ballinahinch notched 0-12 from placed balls (0-9 in the first half alone).

Moneygall certainly tried hard to retrieve the situation and found themselves within striking distance following a Joe Fogarty goal in the 37th minute, but Ballinahinch looked the more accomplished outfit and will face into the knock-out stage of the county championship with a distinct air of confidence.

Moneygall took off like a rocket with points from Joe Fogarty (two), Paddy Fogarty and Seán Fogarty helping the challengers into a 0-4 to no-score lead inside the opening two minutes. Ballinahinch responded with two placed balls, but when Conor Ryan, Brian Teehan and Brendan Toohey (free) added to their tally Moneygall led 0-7 to 0-3 after eleven minutes.

Just then, however, Ballinahinch thundered into this contest. Following a couple of alterations at the back Ballinahinch got on top and landed six points without reply despite hurling into a reasonably stiff breeze. Shane McGrath drilled over three frees, Alan Kelly landed two off his left and Liam Berkery fired over another.

Ballinahinch ‘keeper Cormac McGrath made a significant save to deny Brian Teehan a goal in the 18th minute and by the 23rd the defending champions led 0-9 to 0-7 before Brendan Toohey (’65) registered his side’s first point in fourteen minutes.

Vincent Kearns was fouled for a penalty soon after which Brendan Ryan tapped over and following two more outstanding long-range frees from the stick of Shane McGrath Ballinahinch led 0-12 to 0-10 at the break.

Ballinahinch helped themselves to the first four scores of the second half thanks to the efforts of Darragh McGrath, Shane McGrath (two frees) and Brendan Ryan while Moneygall ‘keeper Mark Fanning did especially well to deny Vincent Kearns a goal in the 31st minute (0-16 to 0-10).

In the 37th minute Moneygall happened upon a real tonic when Joe Fogarty flicked home a Willie Greene delivery (0-16 to 1-10).

The sides traded efforts soon after before Ballinahinch out-scored Moneygall 0-3 to 0-1 thanks to points from Alan Kelly, Ger Grace and David Gleeson to carve out a 0-20 to 1-12 advantage with five minutes to play.

Moneygall stuck at it and reeled their opponents in thanks to two Dónal Doughan efforts (one free) and although a late goal may have rescued the situation from their point of view Ballinahinch were crowned deserving champions when David Gleeson enjoyed the final say in the matter in the first minute of injury time.

Two more intermediate hurling championship finals took place on Sunday. In the South St Mary’s Clonmel saw off the challenge of Carrick Davins (0-23 to 0-11) while Cashel King Cormacs won the West title thanks to a 2-23 to 2-13 final win over Lattin-Cullen Gaels.

Meanwhile in Mid Tipperary Thurles Sarsfields beat Moyne Templetuohy 1-22 to 1-10 on Saturday to book their place in the divisional final against Gortnahoe-Glengoole.