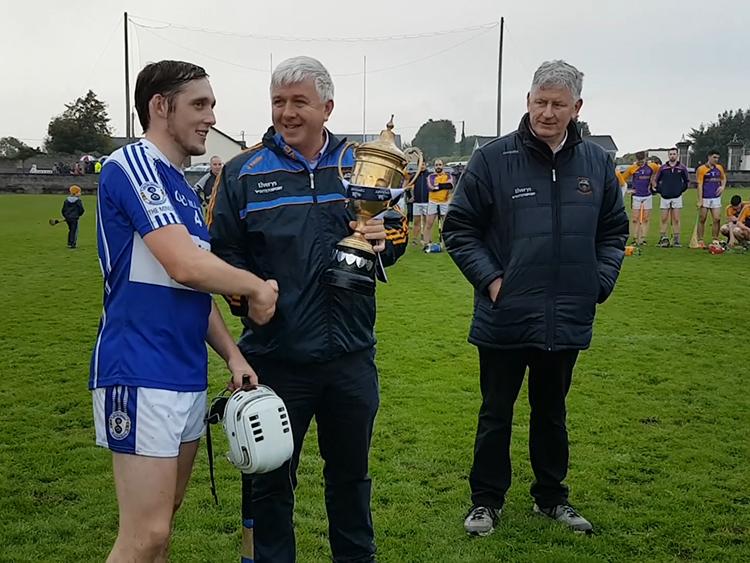 Orrie Quirke inspired Silvermines to a nine-point win over Newport in Newport on Saturday evening in the Tipperary Water County Senior Hurling League Division Three final - although the home side led by three points (0-8 to 0-5) as early as the 22nd minute the ‘Mines proved the more accomplished and composed outfit when out-scoring their opponents 0-20 to 1-5 during the remainder of this contest.

Conor Floyd, Seán O’Brien and Pa Ryan featured for Newport, but their efforts were offset by man of the match Orrie Quirke (who notched 0-11) while team captain David Keogh and David Boland also caught the eye. Indeed, Silvermines appeared to have a better idea of what they wanted to achieve once in possession of the ball and although Newport were always enthusiastic and determined in their effort the 2016 county intermediate champions struggled to make any real impression in attack.

The sides traded scores initially before Silvermines edged into a 0-3 to 0-2 lead by the 13th minute - Cathal Gleeson, Jason Forde and Orrie Quirke had accounted for these early strikes from the ‘Mines.

On a wet evening there were plenty of handling errors, but Newport dominated between the 15th and 18th minutes when the home side hit 0-4 without reply to take a 0-6 to 0-3 lead - centre-forward Pa Ryan was dropping into midfield to great effect and notched two points while Eoin Shinnors added two more.

Silvermines manager John Fitzgerald was not shy about making changes, however, and following an intervention from the sideline Ruairí Maher was introduced to the side as early as the 12th minute. Orrie Quirke and David Keogh responded for the ‘Mines and although points from Steven O’Connor and Pa Ryan (his third from play) helped Newport into a 0-8 to 0-5 lead by the 22nd minute Silvermines were in the game now. Indeed, the ‘Mines closed out the half with four points to take a 0-9 to 0-8 interval lead - Jason Forde, Orrie Quirke (two) and Daniel Keogh accounted for these efforts.

In the opening minute of the second half the ‘Mines created a goal-scoring opportunity, but David Keogh’s rasper was deflected over by Newport ‘keeper Michael Flannery. Colin Floyd then cut the deficit faced by the home side to one, but Daniel Keogh and Ruairí Maher soon replied for Silvermines.

Eamon McCormack notched a point for Newport, but when Orrie Quirke converted two frees and David Keogh added another from play the ‘Mines led 0-15 to 0-10 by the 42nd minute. And, the prevailing pattern of the game was quiet clear - by this juncture the ‘Mines led the shots-at-goal count by a whopping 29-14.

Entering the final quarter Jason Forde won the ball back smartly and landed a classy point before Quirke converted another free (0-17 to 0-10).

Newport needed to locate a hero and found a potential candidate in Pa Ryan in the 47th minute when the home side’s centre-forward drilled home a terrific goal. The ‘Mines, however, responded to the challenge posed in style when firing over the next three points. Efforts from Ruairí Maher, David Keogh and a long-range monster from Orrie Quirke left six in it with seven to play (0-19 to 1-10).

A brace of Darragh Carroll frees book-ended another Quirke effort before Willie Keogh landed a point. Colin Floyd brought the scoring to a conclusion from the home side’s point of view while the ‘Mines pressed on with efforts from Orrie Quirke (two, one free) and David Keogh before Newport ‘keeper Michael Flannery did especially well to deny Willie Keogh a goal in the 62nd minute.