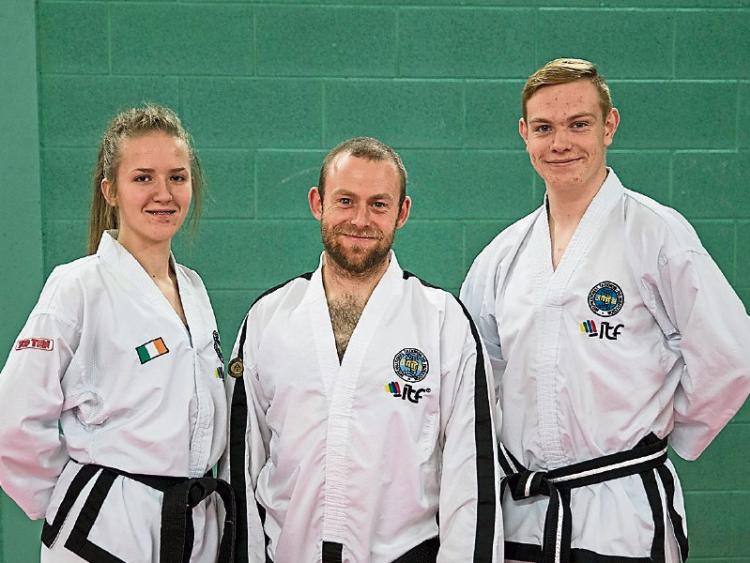 Urte Saikauskas and Adam Hassett with their coach Luke Laffan.

Two Clonmel teenagers will represent Ireland in the World ITF Taekwon-Do championships in Dublin next week.

Seventeen years-old Adam Hassett from No. 4 Ashcourt, Cahir Road, Clonmel and 15 years-old Urte Saikauskas from Crann Ard, Clonmel will compete for their country in sparring in the Championships at the City West Hotel.

More than 1100 Taekwon-do athletes from 54 countries around the world, including a 61-strong Irish team,  will be competing in the World Championships, which kick off next Monday, October 9 and continue until Saturday, October 15.

The two young athletes are members of the Waterford Tipperary ITF Taekwon-Do Club that boasts about 100 members and trains twice weekly at Hillview Sports Club in Clonmel.

Their coach Luke Laffan, who also coaches the national team, said Adam and Urte have shown huge commitment and dedication in their training to reach this level in their sport. They train four to five days a week, which has a big impact on their social life, he pointed out.

Both are combining their training with studying for State exams.  Adam will sit the Leaving Cert at Clonmel High School next June while Urte, a student of Clonmel's Loreto Secondary School, will sit the Junior Cert.

Adam, who is son of Niamh and Paul Hassett, will compete for Ireland in the Junior plus 75 sparring event. He told The Nationalist he took up the popular Korean martial art about seven years ago and trains two hours a day five days a week honing his fitness and Taekwon-do skills.

"I'm a small bit nervous about competing in the World Championships but am looking forward to it at the same time."

Adam said he wished to thank the Higgins family of Mulcahy's restaurant of Gladstone St., Clonmel and Bernard Phelan Kitchens & Wardrobes for providing sponsorship to him.

Urte, meanwhile, will compete in the Junior -65 sparring competition at the World Championships. Her parents Vika and Ray are originally from Lithuania but Urte is Irish born and a proud young Clonmel woman.

She unfortunately injured her ankle a few weeks before the European Championships and the injury forced her to bow out early from Championships. She is now back in action and has been attending physio and taking rest days to help strengthen the ankle for the World Championships.

Urte said competing in the European Championship was a big step for her and a big shock but it was also good experience in competing at international level. "I know what is waiting for me at World Championship," she The Nationalist.