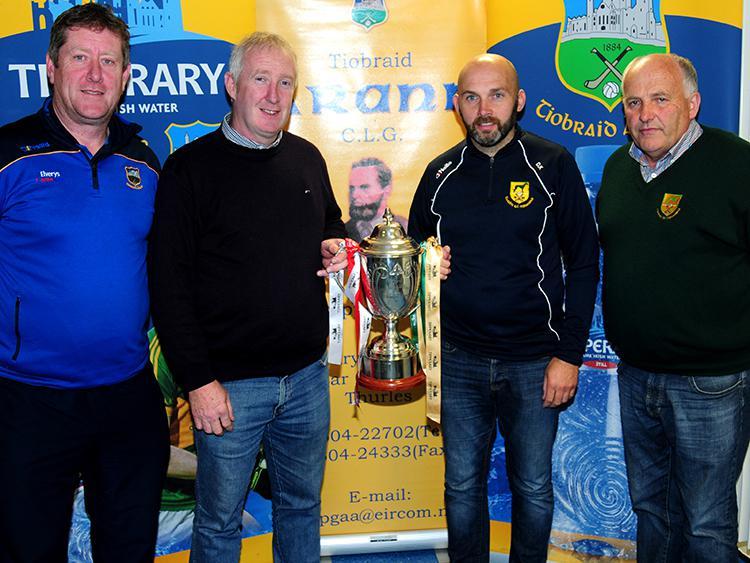 Sunday’s Séamus Ó Riain Cup final at Semple Stadium, Thurles ended in a draw - although we were treated to a dramatic and reasonably entertaining finish to this contest the game lacked quality and both sides will probably look forward to another opportunity to show what they can do on the county final stage.

Toomevara set the pace for long stages. Although the Greyhounds fielded without John O’Brien, Benny Dunne and Joey McLoughney, who has been outstanding this season, Toome were six clear by half time (1-7 to 0-4) after a low key opening period despite losing both Mark McCarthy and Paul Ryan to injury.

Roscrea’s use of the ball was poor and with full-back Andrew Ryan doing a superb man-marking job on Sam Conlon Ger Fitzpatrick’s men struggled to make any real impression on this contest. Indeed, Toomevara maintained their six-point advantage (1-12 to 0-9) until deep inside the last ten minutes when goalkeeper Daryl Ryan buried a penalty following a foul on Davin Flynn - inspired by that strike in the 53rd minute and by the re-location of Sam Conlon to half-forward Roscrea concluded the game with a flurry of points from Davin Flynn, Sam Conlon and Conor Sheedy to force a replay.

Neither side played especially well, but Roscrea’s Liam England and Sam Conlon had their moments while for Toomevara Andrew Ryan and Jake Ryan were outstanding. The man of the match award, however, had to fall the way of Jack Delaney who lashed over five points from play and gave an exhibition of striking off both left and right.

The sides matched up neatly against one another from the off - both opted for a three-man midfield and Toome’s Colm Canning opened the scoring after eighteen seconds. Davin Flynn soon responded for Roscrea before Jack Delaney notched the first of this five from play. Then, in the eighth minute, Evan Fitzpatrick was fouled and Conor Sheedy converted (0-2 apiece) before a Ken Dunne strike from a placed ball edged Toomevara back into the lead (0-3 to 0-2).

A Darren Delaney hook on Davin Flynn denied Roscrea a certain goal in the fifth minute before Liam Ryan blocked a John Ryan effort a minute later. In the tenth minute Liam England enjoyed Roscrea’s third goal-scoring opportunity, but his tame shot was deflected over by Darren Cuddihy (0-3 apiece).

In contrast to Roscrea’s profligacy from goal-scoring opportunities Toomevara were more than efficient - in the 11th minute Mark McCarthy got on to a break from a Seán Flaherty delivery and buried a left-handed shot (1-3 to 0-3). Seven minutes later Toome lost the talented McCarthy to a shoulder injury.

In the 21st minute Jack Delaney conjured an exceptional shot over his shoulder following Andrew Ryan’s pin-point stick pass to present Toome with 1-4 to 0-3 lead and to bring ten scoreless minutes to a close.

Conor Sheedy (free) responded for Roscrea before this contest reached what appeared to be a crucial juncture when Toomevara half-back Darren Delaney was shown two yellow cards following successive fouls on Sam Conlon and then Liam England. Referee Johnny Ryan, initially, brandished a red card at Delaney, but back-tracked sharply and, instead, cautioned the Toomevara man.

The Greyhounds saw out the first half in impressive fashion with injury time points from Ken Dunne (two frees) and Alan Ryan.

Three minutes into the second half John Delaney played in Conor O’Meara with a smart flick and the wing-forward delivered a lovely point, but Roscrea responded with a three-point scoring surge to cut the Toome lead to a manageable four by the 38th minute (1-8 to 0-7) - Sam Conlon cracked over a beauty while Conor Sheedy delivered a brace (one free).

Toomevara, however, steadied themselves and hit back with three of their own. Jack Delaney set them on their way in the 42nd minute when he wrong-footed the Roscrea defence with a jink and shot off his left. Jake Ryan drove out of defence soon after and set up Conor O’Meara for another left-handed point before the wing-back set up Jack Delaney for a superb right-handed point in the 46th minute (1-11 to 0-7).

The quality of Toomevara’s approach play was in marked contrast to that of Roscrea - Toome moved the ball neatly forward while Roscrea appeared determined to feed their inside line with long and hanging deliveries which Andrew Ryan and company dealt with comfortably.

Successive frees from Conor Sheedy and Jason Fitzpatrick reduced the Toome lead to five, but when Colm Canning set up Jack Delaney for another left-handed beauty in the 51st minute this final looked over (1-12 to 0-9).

Roscrea happened upon an absolute tonic of a score in the 53rd minute when Joe Carroll opened his shoulders and launched in a ball which Davin Flynn grabbed - Flynn appeared to be fouled outside the box, but a penalty was awarded nonetheless and Daryl Ryan delivered from the spot (1-12 to 1-9).

Sensing their opportunity Roscrea poured forward with Davin Flynn and Sam Conlon notching key points before Conlon picked out Conor Sheedy with a lovely ball down the left flank and Sheedy delivered an equaliser in the 62nd minute.