Clonmel Og go under to Kildangan in Tipperary football final 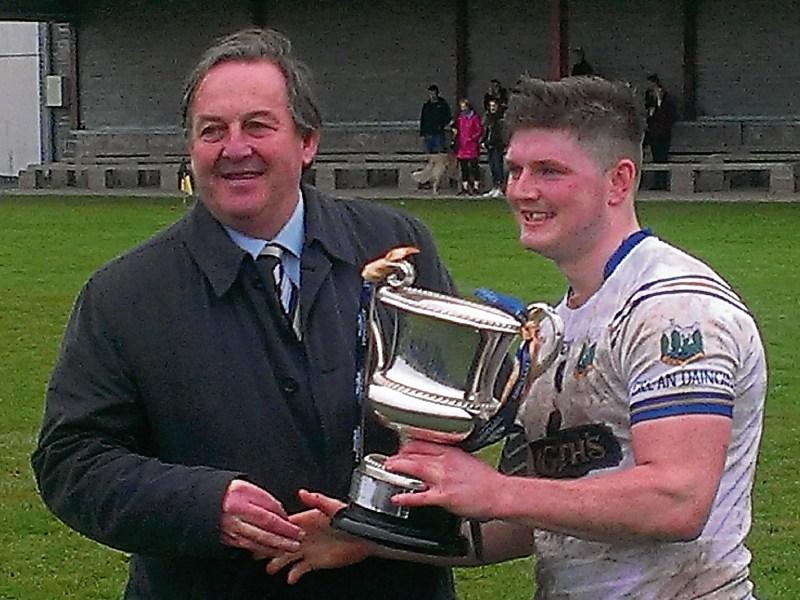 Clonmel Og’s hopes of a county title and a return to senior football for next year ended in disappointment at Dundrum today with defeat to North Tipperary side, Kildangan.

It was a gallant performance by the Clonmel side who did well to be still in contention right at the death, but there was no doubt as to who were the better side in this decider. Had Kildangan made proper use of their majority possession and scoring chances the game would have been well wrapped up before David Sweeney’s goal with the last kick of the game put them into an unassailable position.

They had made it harder on themselves than was needed in securing their ticket to senior football for the first time ever next year; but credit too to the dogged and determined never-say-die attitude of ‘The Og’ for keeping the contest in the melting pot for so long. 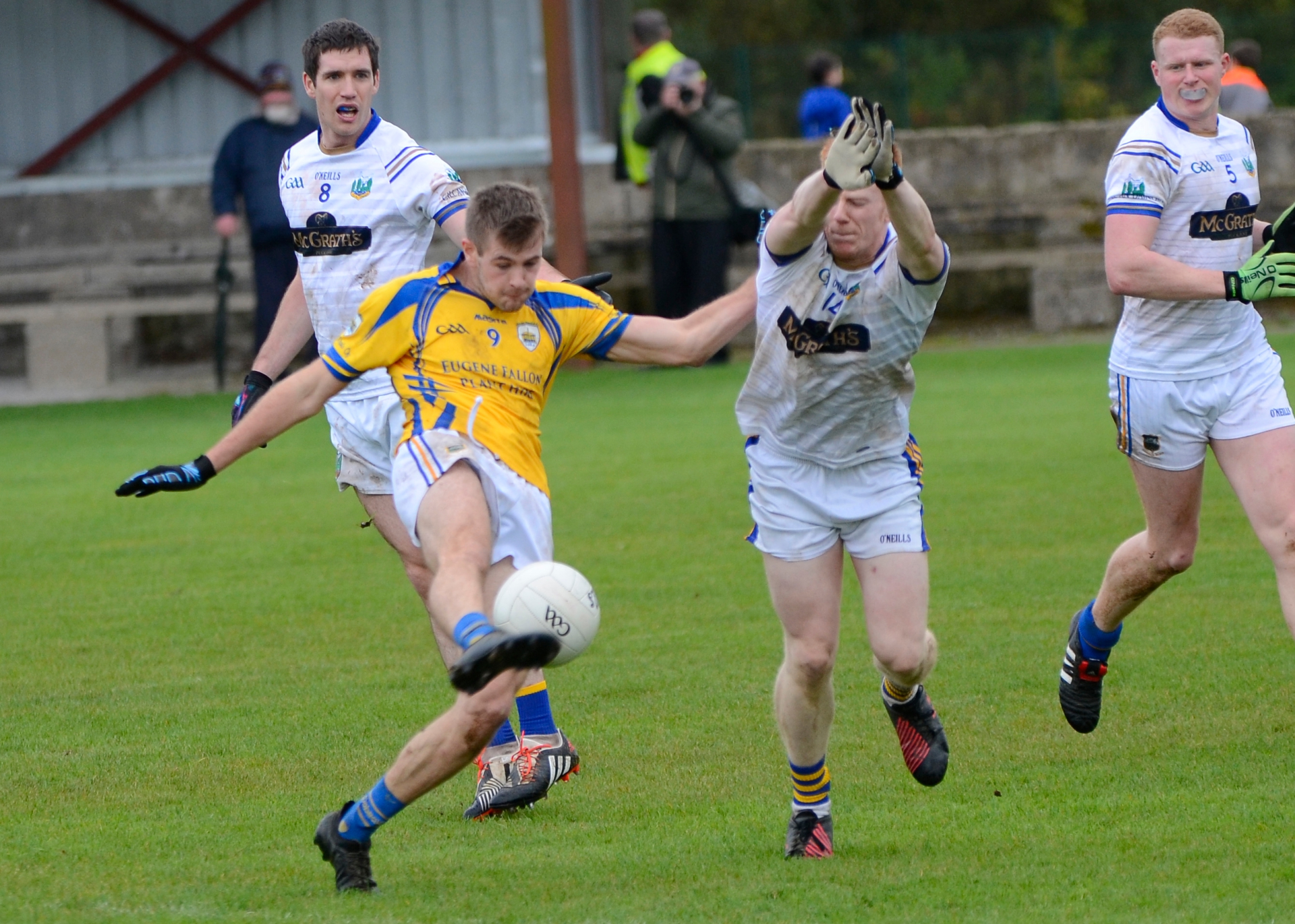 The victory now sees senior football return to the North Tipperary division, but it will be interesting to see how that pans out. If the likes of “divisional sides” Thomas MacDonaghs and the Kenyons have folded in recent years, it is hard to see how a single club like Kildangan – who remember contested last year’s county senior hurling final against Thurles Sarsfields – will manage without serious reinforcements. But all that’s for another day.

Today, however, was their day and they were unflattering and fully deserving four points winners in the end. They established superiority from the start and took an early lead that they never relinquished to the end. Three times the South champions got the deficit back to a single point, but captained by county senior panellist Willie Connors at centre-back, Kildangan dispelled the challenge and were deserving of their win.

With five players on duty who had won county senior football medals with Thomas MacDonaghs (2011 v Moyle Rovers) – Martin Minehan, Joe Gallagher, Fergal Hayes, Darragh Egan and Tommy Connor – Kildangan did not lack for big game experience, and they made the brighter start when going 0-3 to 0-0 up inside a dominant opening 10 minutes.

Darragh Egan kicked the first point in the third minute after good work by Ruairi Gleeson. And then in a two-minute spell points from Dan O’Meara and David Sweeney put them three to the good; indeed O’Meara should have goaled with his initial effort but recycled his chance to sensibly take his point.

Clonmel Og eventually got off the mark in the 10th minute when a good ball played in to the full forward line was won by Conor Arrigan who pointed well.

After Marc Ahearne was then dispossessed coming from defence, Kildangan captain Willie Connors made it 0-4 to 0-1 after 12 minutes. 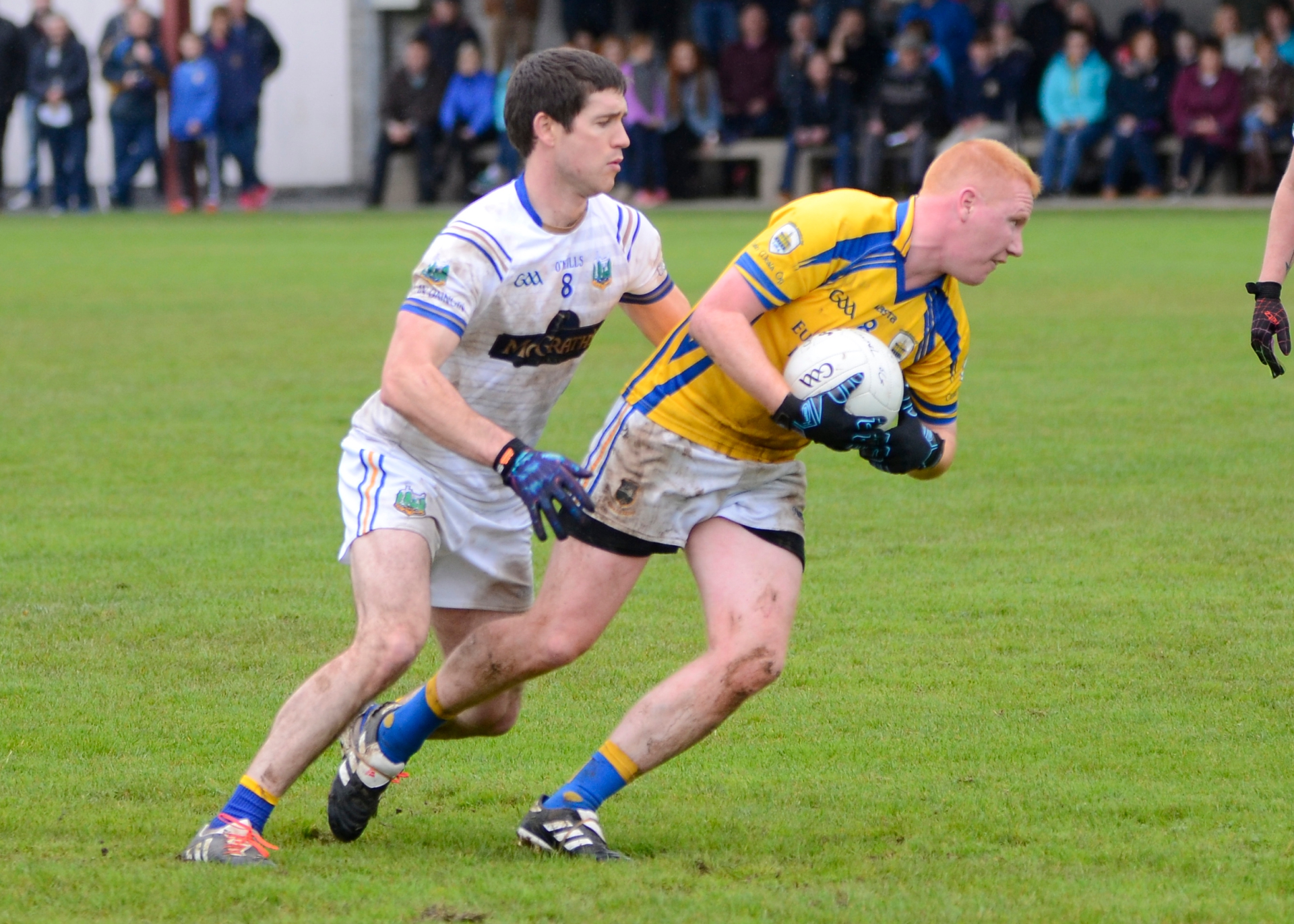 Midfielder Graham Quinn drove at the heart of the Kildangan defence for the next score, to link up with Conor Arrigan whose quick return of pass allowed Quinn to reduce the deficit to two points.

Kildangan were certainly enjoying a greater share of the ball but some bad wides (they kicked 12 on the day to just four for Clonmel Og) were proving costly and then Johnny Cagney with a well struck free from an angle made it a one-point game after 23 minutes. Deep down Clonmel Og would have been quite content with themselves at this juncture.

A strong finish to the first half proved crucial for Kildangan and three unanswered points in a five minute spell sent them in at the break leading 0-7 to 0-3 and fully deserving of that advantage.

On the change-over Kildangan resumed where they let off. A strong running Kevin McGrath set up Dan O’Meara and with his second point of the day Kildangan had gone four clear inside 60 seconds.

Clonmel Og were in trouble and needed something quickly. Almost miraculously it came in the shape of a goal. A pacey run by Conor Arrigan initiated the move and after Gino Lonergan and Eoin Fallon were involved it was finished to the net, opportunistically off the ground, by Graham Quinn in the 33rd minute.

A minute later an excellent point by Conor Arrigan from 40 minutes narrowed the deficit to a single point and the pendulum seemed to be suddenly swinging the way of the South Tipp side. Crucially though, they wouldn’t score again for another quarter of an hour. 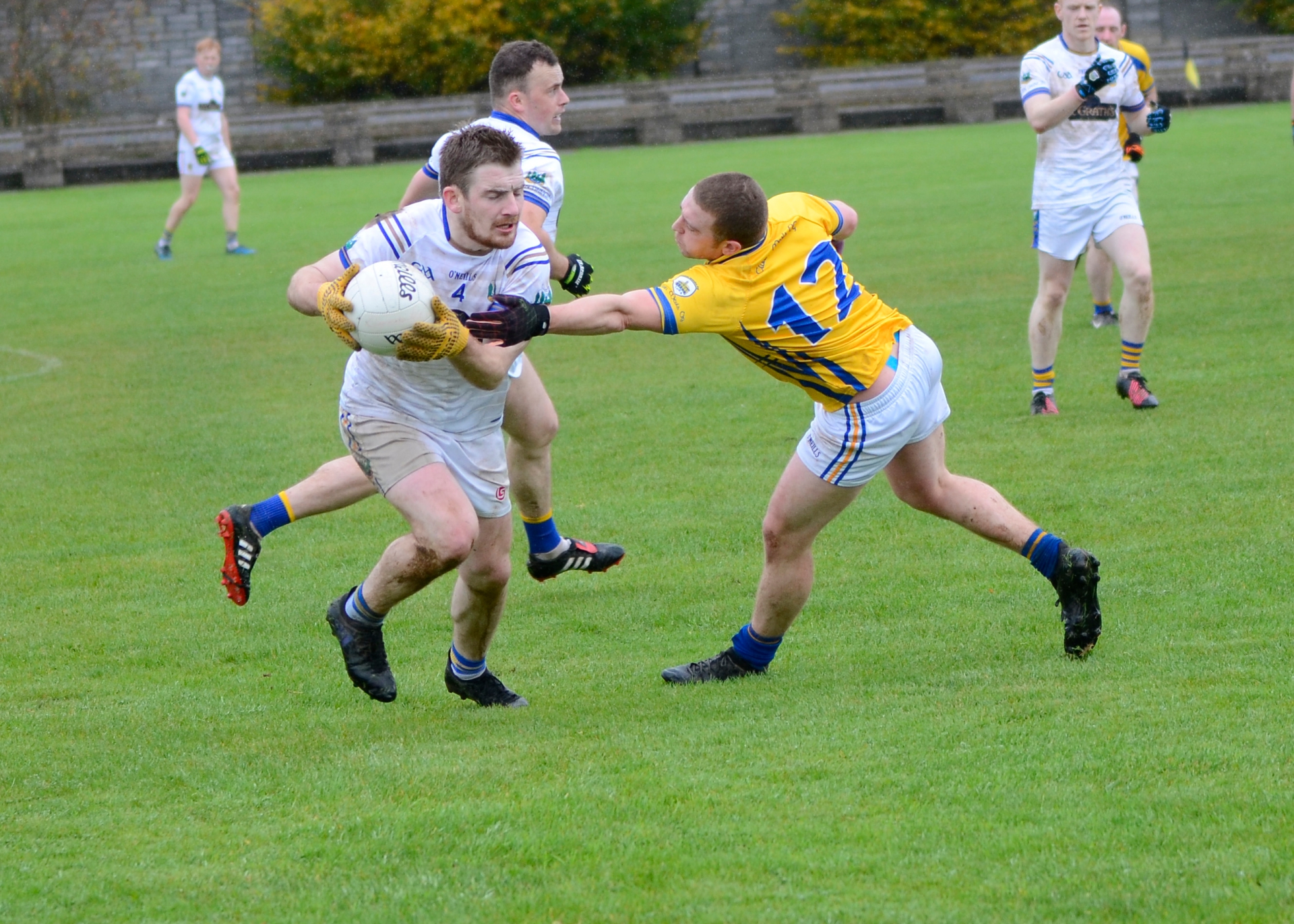 Martin Minehan (Kildangan) breaks out of defence past Gino Lonergan (Clonmel Og) in today's County IFC final played at Dundrum. Minehan is one of five survivors playing today of the Thomas MacDonaghs side that won the county senior title in 2011.

In that time Kildangan steadied themselves again and midfielders Joe Gallagher and Fergal Hayes strengthened their hold. Two frees kicked by Darragh Egan pushed them out to a 0-10 to 1-4 lead but they continued to kick some very sloppy wides when they had the game for the taking.

In that period Kildangan had a glorious opportunity to wrap the game up. A strong running Fergal Hayes set up Darren Moran whose powerful shot at goal came off the crossbar with Martin Boland beaten all ends up. It rebounded out towards the corner flag. Had it found the net the game would certainly have been over for Clonmel Og.

Conor Arrigan after a good pass from John Bates kicked a welcome point for ‘The Og’ – Arrigan was the most likely attacking threat all day for the Clonmel side. However this was soon cancelled out when, just before his substitution with seven minutes to go, Darragh Egan tapped over a close-in free after Dan O’Meara was adjudged to have been footblocked.

With their backs to the wall and time running out Clonmel Og somehow came again and two points in quick succession had them right back in the melting pot for a county title.

Graham Quinn’s pass to Johnny Cagney was superbly finished by the former Tipp inter-county player with a fine left-footed effort from 35 metres out under pressure.

A minute later, Colm Purcell’s side strung a good move together involving Conor Arrigan and John Bates before team captain Darragh Kearney swung a left footed effort over to leave just the bare minimum between the sides with three minutes to play.

And as Kildangan were unlucky when hitting a crossbar earlier, Conor Arrigan was also unlucky to see an effort at an elusive equaliser come down off the upright and cleared to safety with just over a minute remaining.

The reprieve allowed Kildangan to compose themselves and head for opposition territory to help run down the clock. They did eventually give up possession with time almost presenting a now desperate Clonmel Og with one last chance to work the ball upfield. But a lack of composure was to cost them dearly. In trying to work their way out of defence they were turned over and Kildangan full-forward David Sweeney, ever alert, took full advantage to hammer home the final nail in the coffin by slipping the ball under the advancing Clonmel Og keeper.

For all their dominance in territory, possession and scoring chances, Kildangan should have won this encounter in an easier manner. While they were never led, they missed the opportunity to put away their opponents and were mightily relieved to see the late goal go in. That said, they were the better team and deservedly came away with the spoils.

In the midfield pairing of the experienced Joe Gallagher and Fergal Hayes they had the solid platform for victory, the diamond completed by Willie Connors and Darragh Egan. But in Darren Moran they had an excellent roaming midfielder who was at the heart of so much they did, while up front David Sweeney, Dan O’Meara and Darragh Egan (with his free-taking) were immense in this historic win for Kildangan. The combined villages of Puckane, Ballycommon and Dromineer on the edge of Lough Derg deservedly have earned their place at the top table in Tipperary club football. But they should be aware also the gap to senior level is huge as last year's county intermediate champions Fethard only lasted 12 months at the top grade before their recent relegation back down to intermediate for 2018. 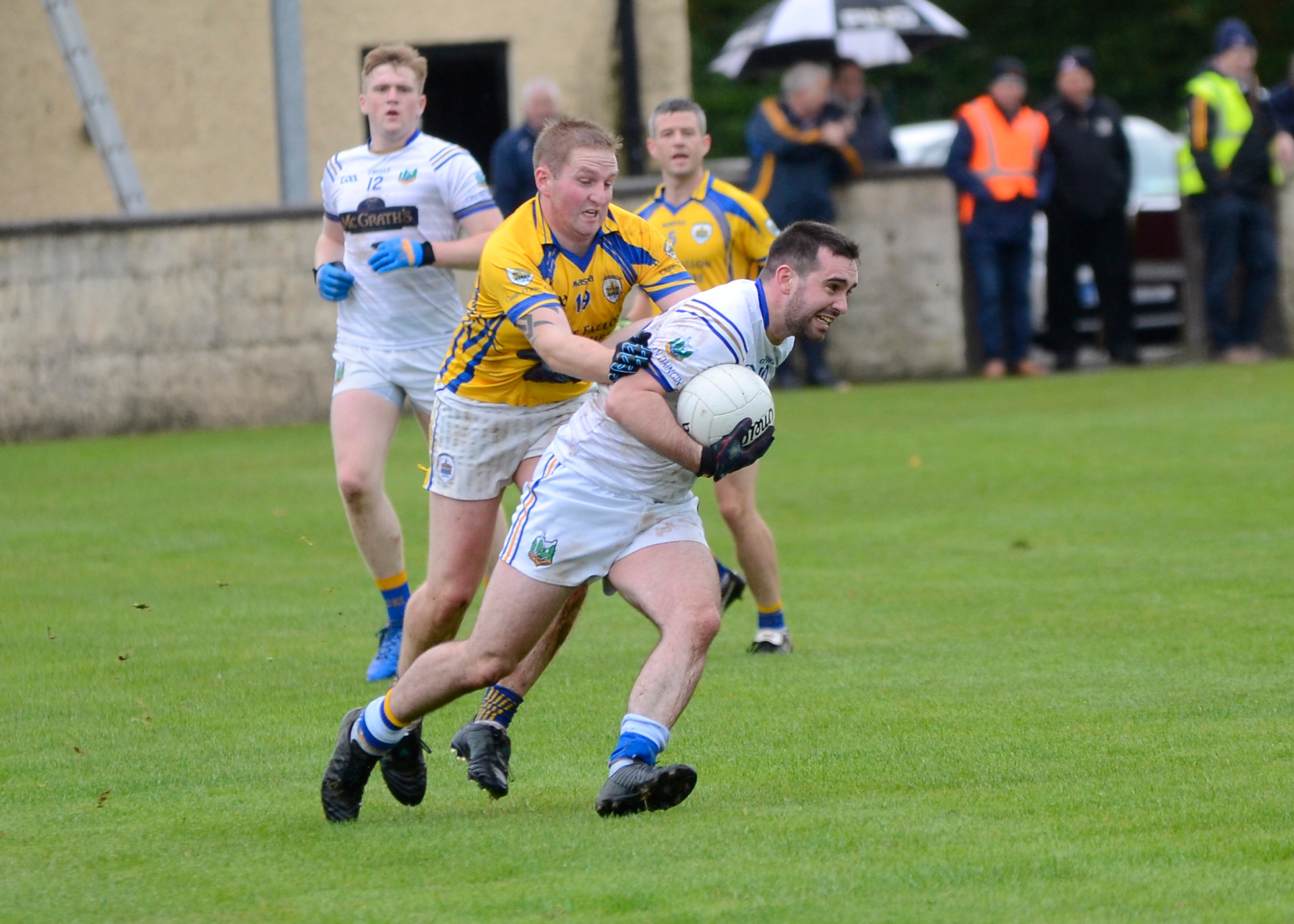 For Clonmel Og it was a disappointing end to a brave campaign. Beaten in the South semi-final last year (to eventual county champions Fethard); and in the previous year in a county final they arguably should have won (against Upperchurch/Drombane), the boys from Ned Hall Park continue to knock on the door looking for a return to senior status which they enjoyed from 2009 to 2014. Whether they are better off with another year at intermediate or whether their ambitions would be best served at senior, is hard to tell, but perhaps a strengthening is still needed before they take that step up again. But will know that themselves. Persistence at this closely-knit and ambitious club will eventually bring the rewards their hard work deserves.

In the likes of Darragh Kearney, Colin O’Mahony, Noel Walsh, John Bates, Johnny Cagney, Graham Quinn and in particular Conor Arrigan they got huge performances, but it just wasn’t enough on the day.