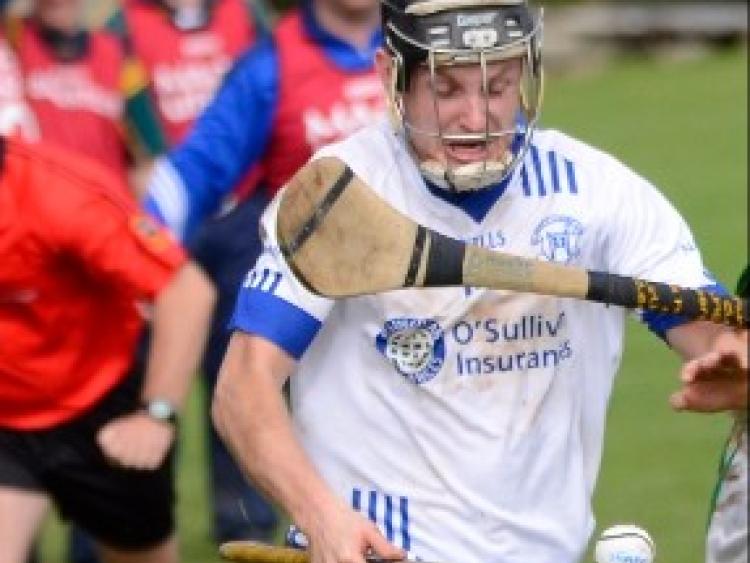 St. Mary's' great run in the Intermediate Hurling Championship came to an end in Mallow when they were well beaten by a powerful Kanturk team in the Munster quarter-final in Mallow in front of an attendance of 1,013.
The south and county champions started brightly and points from Sean Kennedy's free, Seamus Kennedy from play and another Sean Kennedy free gave them a 0-3 to 0-1 lead after 13 minutes.
However Kanturk then started to grow into the game and as they got on top all over the pitch they hit the next nine points in the game to lead by 0-10 to 0-3 after 29 minutes.
A great point from near the sideline from Donnacha Kennelly had given them the lead (0-4 to 0-3) in the 19th minute and they never looked back after that.
Substitute Eric Walsh, who had replaced Joe Gunne in the 27th minute, scored St. Mary's' first score in 19 minutes in first half additional time to leave the score at 0-10 to 0-4 in Kanturk's favour at half time.
After that promising opening St. Mary's had lost their way, as they made little headway in attack and struggled to win possession against a Kanturk side that had really found its feet after a sluggish start.
However, to the Clonmel team's credit, they were in much better fettle when they came out for the second half.
Three points without reply from Jason Lonergan, substitute Gavin Ryan and Jason Lonergain again cut the deficit to just three points after four minutes of the new half.
However it all went downhill for them after that. Kanturk's Ian Walsh struck a great point from way out the field before he started the move that was continued by Liam O'Keeffe and ended with Mark Healy shooting to the net in the 40th minute (1-11 to 0-7).
The goal sent St. Mary's on a downward spiral and after that they had little or no chance of getting back into the game.
In fairness to them, they battled to the very end. Ross Peters, Sammy Ryan, Paul Nolan and Liam Ryan were generally solid in defence, while the midfield pairing of Jamie Peters and Richie Gunne never stopped working.
Jason Lonergan was typically industrious, scoring three points from play, while Seamus Kennedy, Eric Walsh and Gavin Ryan couldn't be faulted for endeavour either.
Kanturk were seven points ahead and well on their way to victory when they underlined their superiority with a second goal seven minutes from the end of normal time when Donnacha Kennelly shot to the net.
St. Mary's were denied the comfort of a consolation goal when Seamus Kennedy's low free in the final minute was blocked by goalkeeper Anthony Nash.
And so the Clonmel team have reached the end of the road, but they can look back with immense pride and satisfaction on a season in which they regained their senior status while winning the divisional and county titles.
Kanturk will fancy their chances of going all the way in this championship. With players of the calibre of Cork stars Anthony Nash and Lorcan McLoughlin, as well as Mark Healy, Ryan Walsh, Liam O'Keeffe, Donnacha Kennelly and Ian Walsh, they'll be a match for any team.
However they'll have concerns about another inter-county player, Aidan Walsh, who was forced to retire with what appeared to be a hamstring injury after just eight minutes.
St. Mary's Clonmel- Shane O'Neill (captain), Joe Gunne, Kyle Peters, Paul Nolan, Liam Ryan, Ross Peters, Sammy Ryan, Richie Gunne, Jamie Peters, Jason Lonergan (0-3), Gearoid Buckley, Seamus Kennedy (0-3, 1 free and 1'65), Dean Fitzgerald, Darren Cass and Sean Kennedy (0-2 frees).
Substitutes- Eric Walsh (0-1) for Joe Gunne (27 minutes), Gavin Ryan (0-1) for Gearoid Buckley (half time), Conor O'Sullivan for Dean Fitzgerald (42 minutes), Matt Barlow (0-1) for Sean Kennedy (42 minutes) and Stephen Buckley for Darren Cass (54 minutes).
Kanturk -Anthony Nash, Paul Walsh, John McLoughlin, John Browne, Alan Sheehy, Darren Browne, Lorcan O'Neill (captain), Lorcan McLoughlin (0-1 free), Ryan Walsh (0-1), Ian Walsh (0-5), Mark Healy (1-1), Donnacha Kennelly (1-3), Alan O'Keeffe, Aidan Walsh and Liam O'Keeffe (0-5, 3 frees).
Substitutes - James Fitzpatrick for Aidan Walsh (8 minutes), Martin O'Riordan for Alan O'Keeffe (42 minutes), Denis O'Connor (0-1) for Ryan Walsh (54 minutes), Jordan Fullerton for Paul Walsh (60 minutes) and Christopher Mullane for Ian Walsh (62 minutes).
Referee - Tomás Walsh (Waterford).