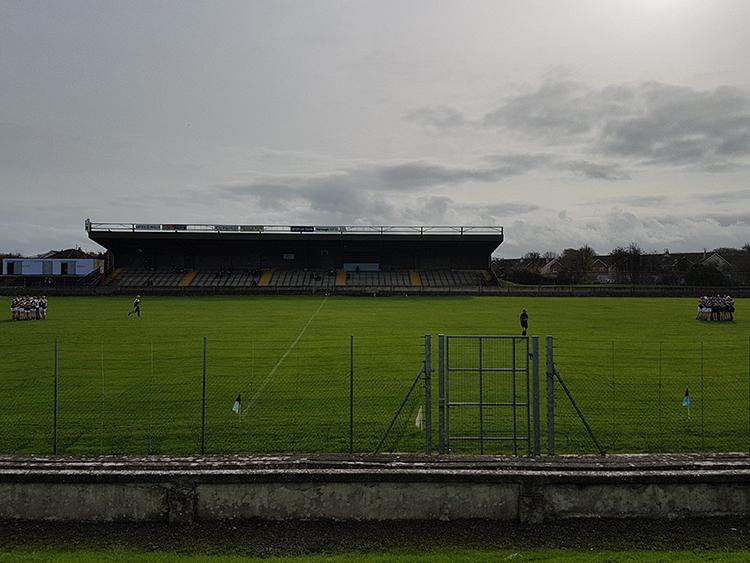 The teams pictured before the game at MacDonagh Park, Nenagh.

Our Lady’s Templemore booked their place in the quarter-finals of the Dr Harty Cup with a game to spare on Wednesday thanks to a 32-point win over Castletroy College at MacDonagh Park, Nenagh. Sadly, this contest turned into a procession of scores as the Limerick outfit struggled to contain the defending champions.

Our Lady’s won their opening round contest against Christian Brothers College, Cork (1-15 to 2-11) and will face into the third round against St Flannan’s, Ennis knowing that they have already secured their place in the knock-out stages of the Munster under-18.5A colleges hurling competition.

Meanwhile CBS Thurles got back on track thanks to a 4-19 to 0-9 win over Doon and Nenagh CBS got the better of Gaelcholáiste Mhuire Thuaigh, Cork (1-15 to 3-8) in Waterford. CBS Thurles and Nenagh CBS face one another in the third round of that group - on that occasion CBS Thurles will require a win while Nenagh CBS have already accumulated four points. The third round is scheduled to take place on Wednesday, November 15th.

Our Lady’s utterly dominated the contest with Castletroy College. Despite shipping a goal as early as the third minute Templemore led 1-17 to 1-5 at the break and saw their inside forward line of Conor McGrath, Gearóid O’Connor and James Devaney notch a whopping 5-11 from play. The outstanding efforts of Éanna McBride, Kevin Maher, Michael O’Connor, John Ryan and, especially, Shane Doyle dug the foundations of this win in the middle third of the field.

Between the 12th and 26th minute Castletroy College, to their credit, managed to make a battle of it and thanks to lovely points from Ronan Reale (two, one free) and Niall O’Brien trailed by just five (0-12 to 1-4).

Our Lady’s Templemore, however, closed out the half impressively when out-scoring their opponents 1-5 to 0-1 to establish a 12-point advantage by the break. In the 27th minute a brilliant hook by Castletroy full-back Pádraig Harnett denied Gearóid O'Connor a goal, but Conor McGrath profited on the rebound and notched the opening goal of the game. James Devaney, Shane Doyle, Conor McGrath, John Ryan and Gearóid O'Connor soon added points and Castletroy were cut adrift.

The sides traded points during the opening two minutes of the second half before Our Lady’s cut loose once more - this time firing 2-3 without reply. Conor McGrath plundered his second goal in the 35th minute while Gearóid O'Connor set up James Devaney for a smasher a minute later. Following a Gearóid O'Connor point Templemore led 3-21 to 1-6 with thirty-six minutes played.

Castletroy responded with two points, but were frustrated in the 43rd minute when Niall O’Brien aimed a rasping shot at the top right-hand corner. Our Lady’s ‘keeper Eoin Collins, however, conjured an amazing full-length save to deny the Limerick side a goal.

James Devaney set up wing-back Thomas O’Farrell for Templemore’s fourth goal in the 49th minute before man of the match Shane Doyle combined with Stephen Frend in the 53rd minute to create the room for a Gearóid O'Connor three-pointer. Five minutes later James Devaney helped himself to sixth goal and Castletroy College trudged out of MacDonagh Park looking a little downhearted. Indeed, the frightening aspect to this performance was the fact that Our Lady’s created another five solid goal-scoring opportunities.