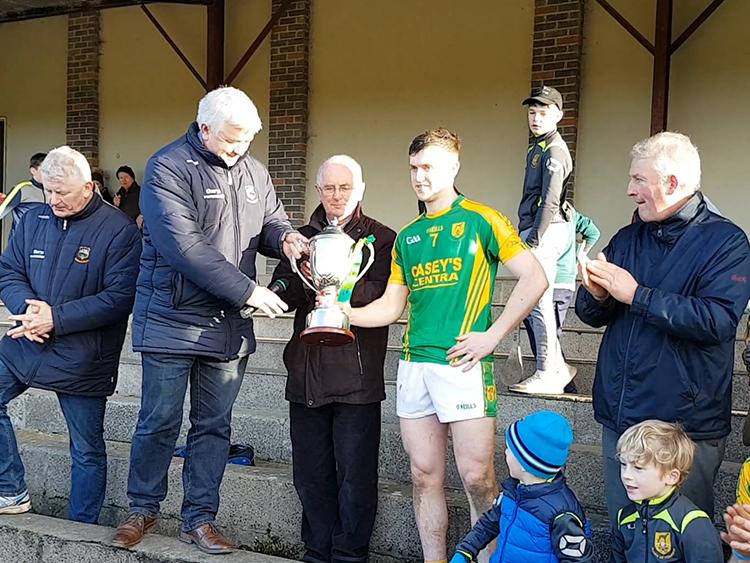 The Greyhounds returned to the big time on the club hurling scene with a bang at Moneygall on Sunday afternoon - Toomevara notched a double-score victory over a disappointing Roscrea side in the replayed final of the Tipperary Water County Senior Hurling Championship Séamus Ó Riain Cup.

Toome will proudly take their place in Roinn I of the 2018 Tipperary Water County Senior Hurling Championship following a successful Séamus Ó Riain Cup campaign which was crowned on Sunday last by a twelve-point win over Roscrea.

Both sides were promoted to Roinn I prior to this decider, but the style of this victory will give the Greyhounds plenty of confidence. And, you can be sure that supporters of the green and gold will be eager to sign up the management team featuring Denis Kelly, Tommy Dunne and Kevin Cummins for the forthcoming campaign.

Although Roscrea appeared a little off-colour on Sunday the Toomevara lads went about their business smartly and proved the much more accomplished side. Playing with the wind in the opening half Toomevara led 1-11 to 0-7 at the break thanks to a Mark McCarthy strike. Roscrea did try to rouse themselves in the second half, but a Ken Dunne goal checked their progress somewhat.

Following this final Jason Ryan was presented with the man of the match award, but there were numerous other pretenders to that particular throne namely the outstanding Andrew Ryan, Darren Delaney (captain), Josh McCarthy and Ken Dunne. And, it could also be argued that the style of the Greyhounds’ hurling was the real star of this show. Toomevara moved the ball out of the contact area beautifully and then found one another with an eye-catching brand of stick passing.

Eight minutes into this encounter Toomevara led 0-4 to no-score and had also created a goal-scoring opportunity. The points arrived courtesy of Conor O’Meara and Ken Dunne (three frees) while Roscrea ‘keeper Daryl Ryan saved a booted effort from Mark McCarthy in the seventh minute.

In a rare illustration of what this Roscrea side are capable of Conor Sheedy set up Shane Fletcher for a smashing point in the eighth minute and Sheedy added a converted free to his side’s tally seconds later (0-4 to 0-2).

Between the 11th and 18th minutes, however, Toomevara notched four successive points to streak into a 0-8 to 0-2 lead. Jack Delaney set Toome on their way before the corner-forward recycled the ball smartly into the hand of John O’Brien for another lovely point. Ken Dunne landed a cracker from long-range soon after before the ball was recycled to Jake Ryan in the 18th minute and the half-back presented the Greyhounds with a six-point lead.

Roscrea hit back with points from Jason and Evan Fitzpatrick before Ken Dunne converted another free. In the 24th minute Darren Delaney found the unmarked Ken Dunne for Toome’s tenth point and although a Conor Sheedy free left five in it (0-10 to 0-5) the Greyhounds plundered a crucial goal in the 27th minute. When Darren Delaney’s searching diagonal delivery broke in behind John O’Brien there appeared little danger, than is until Mark McCarthy won the ball, turned onto his left and buried a superb shot.

Roscrea out-scored Toomevara 0-2 to 0-1 during the remaining minutes of the opening half, but you half expected that this one was already in the bag (1-11 to 0-7).

In the opening minute of the second half a terrific long-range strike from Jason Fitzpatrick gave the Roscrea supporters something to shout about, but disaster struck in the 32nd minute when John O’Brien made a nuisance of himself and Ken Dunne’s effort at a point dropped into Daryl Ryan’s net (2-11 to 0-8).

The sides traded points thereafter before a Jason Fitzpatrick free in the 43rd minute left eight in it (2-13 to 0-11).

With fifteen minutes to play Roscrea carved out a solid goal-scoring opportunity, but Darren Delaney managed to block Jason Fitzpatrick’s shot. Five minutes later Darren Delaney was on hand, once more, to save Daryl Ryan’s 21-yard free while Toomevara closed out this enterprising display with points from John O’Brien, Darren Delaney and Ken Dunne (three frees). A Jason Fitzpatrick point brought the scoring to a close from a Roscrea point of view in second half injury time.