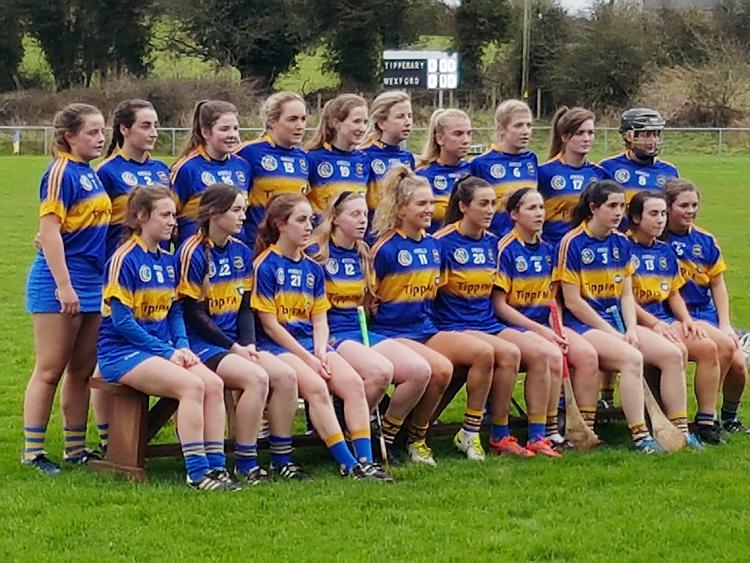 The Tipperary panel of players which launched their league campaign on Sunday.

Bill Mullaney's Tipperary senior Camogie team launched their Littlewoods National League campaign at home to Wexford at The Ragg on Sunday, but suffered a cruel defeat when the visitors plundered a late, late goal. The Premier County fielded a team packed with novices, but were the more consistent force in this encounter and led by two points deep into injury time when Linda Bolger struck for a match-winning goal.

Although Tipperary will be ultimately frustrated by the result of this contest there were plenty of positives. Bill Mullaney opted to field a really young team and the Newport-Ballinahinch man was rewarded with some outstanding performances; Karen Kennedy looks a real find in the half-back line and Keely Lenihan shone out up front.

Orla O’Dwyer, the newly-installed captain of the side, was inspirational at centre-forward as were Mary Ryan, Ereena Fryday and Nicole Walsh. But the real feel good story of the afternoon originated with the home side’s player of the match Sarah Fryday - the Clonoulty star has made a full recovery from a cruciate knee ligament injury and smacked in two goals during an outstanding display.

Thanks to strikes from Joanne Dillon and Una Leacy Wexford led 0-2 to 0-1 early on before Tipperary hit four successive points during a rousing period to take a three-point lead (0-5 to 0-2) by the tenth minute. A long-range free from the stick of Nicole Walsh set the home side on their way before Orla O’Dwyer, Keely Lenihan and Andrea Loughnane added cracking scores.

Wexford struck for a point in reply, but Niamh Treacy set up Nicole Walsh for a fine score soon after and following another terrific Orla O’Dwyer point Tipperary led 0-7 to 0-3 after sixteen minutes.

Sarah Fryday had a goal chance saved as early as the fourth minute, but the Clonoulty inside forward was not to be denied in the 20th - Fryday was played in thanks to a smart hand pass from Nicole Walsh and the corner-forward scored a fine individual goal.

Wexford responded well with a point from Linda Bolger and then the visitors struck for their opening goal of the game in the 23rd minute when Bolger completed a terrific attacking move (1-7 to 1-4).

Tipperary closed out the half in enterprising fashion with points from Orla O’Dwyer and Niamh Treacy to lead 1-9 to 1-5 at the break.

Seven minutes into the second half Sarah Fryday threatened another goal, but fired agonizingly wide. A Linda Bolger free reduced the Tipperary lead to three points soon after, but Fryday struck for her second goal in the 43rd minute to help the Premier County toward a 2-9 to 1-6 advantage - Fryday bravely caught a Jean Kelly cross and hand-passed to the net.

Andrea Loughnane responded with a point for Tipperary (2-10 to 2-6), before Wexford hit four points without reply to tie the game by the 58th minute - Shelly Kehoe, Linda Bolger (two frees) and Una Leacy were responsible for these strikes.

Tipperary, however, re-grouped and Orla O’Dwyer won a terrific turnover in the 59th minute before belting the home side back into the lead. Then, two minutes into injury time, O’Dwyer set up Mary Campion for what appeared the insurance score.

Wexford, however, had other ideas and enjoyed one final attack - ‘keeper Caoimhe Bourke saved brilliantly from Linda Bolger and Amy Cardiff before Bolger scrambled the rebound home in the 63rd minute.

Tipperary will face Offaly (at home on January 21st), Galway (away on February 4th) and Cork (away on February 18th) in group one of the Littlewoods National League. Incidentally, Waterford, Meath, Dublin, Limerick, Kilkenny and Clare compete in group two.

The Tipperary Camogie team will launch their championship campaign on the week-ending June 10th and have been drawn in group two alongside Cork, Dublin, Meath, Offaly and Wexford.

Manager Bill Mullaney (Newport-Ballinahinch) is joined on the management team by Niamh Lillis (Drom & Inch) and Aaron Whelehan (Birr, Offaly). The strength and conditioning coaches are Declan O'Rahilly, Maggie O'Grady and Paddy Quinlivan. Dr Paul Scully is the team doctor and the physiotherapy is covered by Ballina's Dan Finnerty and Michael Hurley.

Bill Mullaney and his management team announced a panel of forty-six players for the National League campaign in December - Burgess-Duharra players, who are preparing to face Sarsfields (Galway) in the All-Ireland club semi-final on the week-ending of January 28th, were not considered.