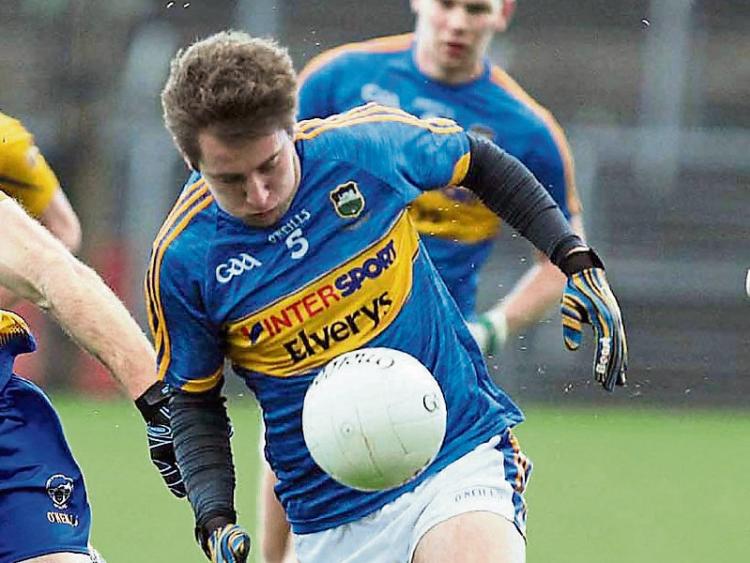 Bill Maher scored a superb second half goal for Tipperary in tonight's win over Meath at Semple Stadium, Thurles.

Tipperary senior footballers took a massive step towards at least guaranteeing their status in Division 2 for next season with an eight points victory over Meath at Semple Stadium, Thurles, on Saturday evening.

In a hugely improved performance from the Clare game in Ennis a fortnight ago, Tipp were never led over the 70 minutes and were well worth their victory in a game Tipp manager Liam Kearns afterwards described as “a four-pointer.”

The win nicely sets up Tipperary for the visit to Thurles next Sunday of a pointless Louth team, and should ‘The Premier’ manage to prevail again, Division 2 status will be guaranteed for 2019. If they succeed against Louth, Tipperary could then look forward to their final two outings of this year’s league campaign, away to Down and away to Cavan, without any real pressure on their shoulders. Thereafter who knows; remember they secured promotion to Division 2 last season with an away win against Armagh.

There was plenty to admire about this win over ‘The Royals’ with Tipp seizing control in the second quarter and never looking back after that. Level at 0-4 apiece after 15 minutes, Tipperary kicked on with four unanswered points and were heading to the break at 0-8 to 0-5 when they got a massive psychological boost right on the stroke of half-time. A move out of defence down the old stand side saw Josh Keane feed Conor Sweeney whose long punt into the goal area was won by Michael Quinlivan and once again, the Clonmel Commercials star superbly finished to the Killinan end goal.

Michael Quinlivan hit another superb goal for Tipperary tonight against Meath, his third in four games in Division 2 for the former All-Star footballer.

This 'three-pointer' sent Liam Kearns' side in at the break 1-8 to 0-5 ahead and in a commanding position to drive on for a very important victory.

Three weeks ago Tipperary let a seven points lead against Roscommon slip and similar thoughts must have rushed through the minds of the management team after Meath rattled off three points inside three minutes of the restart. Worryingly also, two of the three points came with Meath dominating Evan Comerford’s kick-outs and swiftly returning for white flags.

Tipp weathered that storm and settled again. The game-changing score which swung the pendulum back in Tipp’s favour was also their first score of the second period, a goal 10 minutes in. A move started by the influential Steven O’Brien was carried on by Bill Maher and in a one-two with Michael Quinlivan, Maher got in around the corner back to place a low ball beyond the reach of keeper Andrew Colgan. That green flag in an instant restored Tipp’s six points half-time advantage, but more significantly it settled frayed nerves and Tipp never looked like losing thereafter.

Tipp, with a further three points from Conor Sweeney (2F) and a point from Steven O’Brien, were nine points up before Meath hit back with a goal of their own in the 62nd minute from midfielder Bryan Menton. It came from nothing as Tipp seemed to have the situation under control but a sloppy pass was intercepted and goaled. However, unlike in the the game against ‘The Rossies’, Tipp never allowed Andy McEntee’s side build further momentum and quickly closed out the win in a reassuring manner.

If Liam Kearns had described the performance in Clare as the worst he had seen from a Tipp side who were unrecognisable from their decent performance against Roscommon the previous Sunday; this performance on the flip side was equally unrecognisable from the Ennis draw. This mid-way game in the seven-game league campaign was pivotal in its importance; with the outcome to provide either a promotion push or a relegation fight depending on the outcome. Tipp can now propel themselves into the top-of-the-table mix with a win against the ‘Wee County’ next Sunday (part of a double bill with the hurlers).

In defence Alan Campbell, Bill Maher, captain Robbie Kiely and John Meagher (a huge addition since his return from injuries) kept Meath at bay time and time again. It seemed every time Meath broke a line, another line was waiting to be breached again. It was stamina-sapping and somewhat demoralising for a Meath side who now find themselves in a dogfight with games still to come against Cork and Down.

Liam Casey and Steven O’Brien put in big games in the middle of the park with both adding a point apiece. As ever Brian Fox’s contribution, especially in a sweeper role was immense while Josh Keane got through an amount of possession as well as providing the game's opening score. Conor Sweeney put in another profitable performance ending the game with nine points (5F) and Michael Quinlivan scored yet another superb goal, his third of the campaign to date (Cork, Roscommon, Meath) while Liam McGrath ran himself into the ground before a very late substitution. Overall it was a very workmanlike performance by all 19 players used and thankfully, this time, on their home patch, they got the right result.