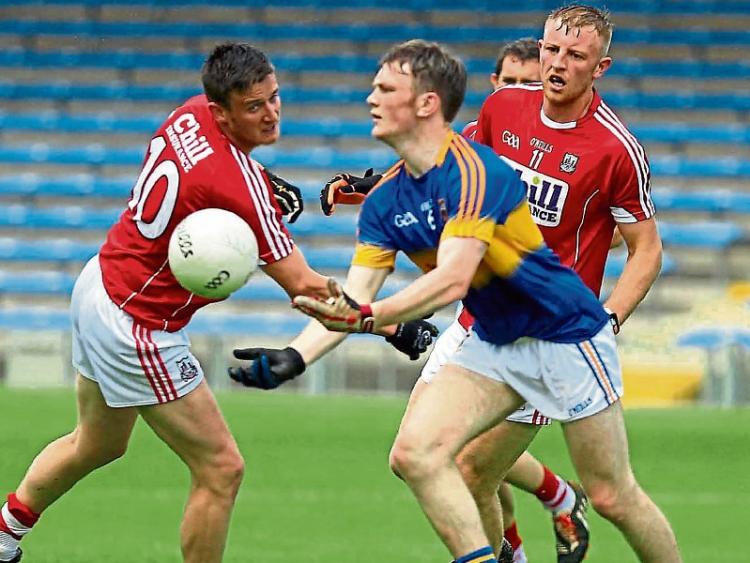 Emmet Moloney is back in contention for Tipp having helped NUI Maynooth to success in the Ryan Cup.

After the snow-blanket abandonment of  all National League games last weekend, the fifth round of games in Division 2 of the National Football League go ahead this weekend with Tipperary hosting Louth at  Semple Stadium on Sunday (12.30 pm) hoping to pick up another valuable two points. The Division 1A Hurling Clash of Tipp and Cork will follow at 2.30 pm.

The confidence boosting performance and victory over Meath puts Liam Kearns’ side at the top end of the table and another win against the ‘Wee County’ on Sunday would keep momentum moving in the right direction. It should be noted that this is Tipp’s last game at home in this seven-game campaign, so it is a ‘must win’ game to ensure our safety in Division 2 for next year. After four rounds of matches only four points separate seven teams in the Division, with Louth stranded hopelessly at the foot of the table.

A win would set Tipp up nicely for their final two games away to both Down and Cavan; a defeat would leave Liam Kearns’ side with a very anxious fortnight ahead with two trips in successive weeks up to Ulster.

Tipp followers can be assured that no complacency will be entertained by the backroom staff in preparing the side for Sunday.

Speaking immediately after the win over Meath, Tipp manager Liam Kearns sounded an immediate note of caution regarding the upcoming visit of Louth.

“Louth came here last year and beat us when promotion was on the line - kicked our arses by four or five points. We know it will be another tough game - there are no easy games in this Division and that’s the reality of it. We have just got to keep going until we have consolidated our position in the division,” warned Kearns.

“We have not won back-to-back games in Thurles in the three years that I have been here. So, we will certainly be doing our utmost to back this performance up next Sunday,” he went on to add.

Up to Friday morning the Tipperary team hadn’t been announced but the extra week since the Meath game will have given players on the injury list an extra chance of recovery.

Drom/Inch’s Emmet Moloney is back in contention having helped NUI Maynooth to victory in the recent Ryan Cup Colleges competition. Paddy Codd (Killenaule) and Kevin O’Halloran (Portroe) are also available for selection after recent injuries.

Also on the mend are Shane O’Connell (Golden/Kilfeacle) who picked up a hand injury against Meath; Jack Kennedy (Clonmel Commercials) who played the second half in the recent South Under 21 final; Colm O’Shaughnessy (Ardfinnan), Brendan Martin (Kilsheelan/Kilcash), Philip Austin (Borrisokane) and Joedy Sheehan (Fethard).

“Apart from that everyone else is good,” according to Tipperary selector Paul Fitzgerald.

And with three tough games over three weekends Tipperary will be hoping to keep the panel as strong as possible in the run-in.

A close eye will be kept on all the other games in the Division at the weekend with table toppers Cavan - the only still unbeaten side - hosting fellow Ulster side Down on Saturday night in Breffni.

On Sunday Clare will welcome Roscommon to Cusack Park and that promises to be huge game for both sides.

The other game is in Navan where age-old rivals Meath and Cork go head to head. Meath cannot afford another defeat as they currently occupy a relegation position, while ‘The Rebels’ having also lost two games know that another defeat may well deny the pre-competition favourites a promotion ticket back to Division 1 for 2019.

Tipperary and Louth met twice in the last 12 months with one victory apiece.

At the end of March, Tipp welcomed the Leinster side to Thurles knowing that a win on the day would see them promoted to Division 2 (with a game still left to play). But Louth tore up the script and caught Tipp on the hop  winning by 0-16 to 0-12. That victory guaranteed Louth automatic promotion.

That loss to Louth forced Tipperary to Armagh for their final game of the campaign needing a win and in a smash-and-grab display in which  Michael Quinlivan scored a hat-trick of goals Tipp earned a promotion.

In the Division 3 Croke Park final  on 8th April, Liam Kearns’ side reversed the Thurles result against Louth winning by 3-19 to 0-19.