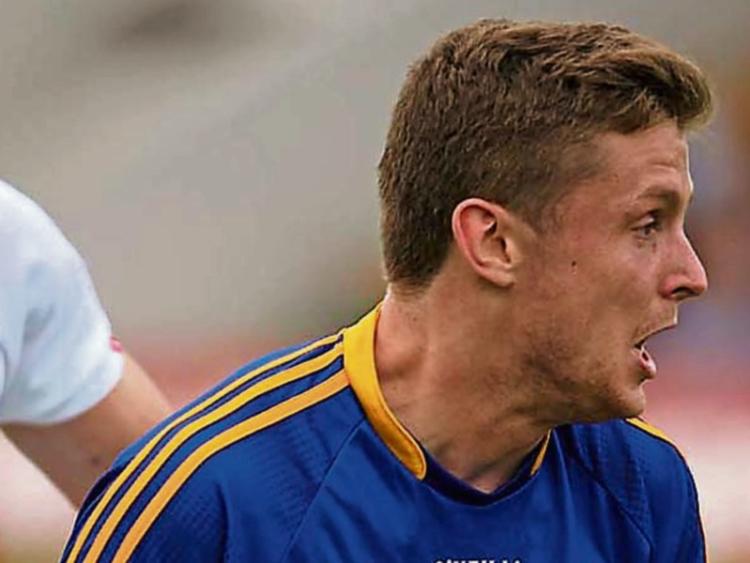 Jason Lonergan (Clonmel Commercials) who made his first start of the campaign for Tipp in today's win over Louth at Semple Stadium.

Tipperary footballers recorded a comfortable 14 points win over Louth at Semple Stadium this afternoon, a victory which almost certainly guarantees their place in Division 2 for next year and keeps their hopes of promotion to the top flight very much alive with two games remaining.

It was an overpowering first quarter after which they led by a staggering 12 points (2-7 to 0-1) that laid the foundation for this success; the game virtually over as a competitive contest after just 16 minutes of play.

Already leading 0-3 to 0-0, Tipp had their first goal in the sixth minute when rampaging wing-back Bill Maher picked up on a poor Louth kick-out and soloed through before blasting home his second goal in two games.

Ten minutes later, with Tipp already nine points clear, the game was put to bed. A flowing move through the middle, in which Liam Casey and Brian Fox one-twoed, set up Michael Quinlivan, and for the fourth time in five league games the Clonmel Commercials forward scored a superb goal. Sixteen minutes in – game over!

Tipp with a very business-like approach right from the off were dominant all over, and went to the break leading by 12 points with Conor Sweeney accounting for five points, three from frees. But a lot of credit also to a battling Tipp defence who were very effective and hard-working as a unit and whose counter-attacking had the “Wee County” chasing shadows time and time again.

Louth, to their credit, emerged fighting for the second half and took what appeared a lost cause to Tipp. They had the better of the opening 15 minutes and had the almost unassailable lead whittled down to 2-11 to 0-8 by the 50th minute, but nine points was to be as close as they would get. There was to be no repeat of last year’s surprise win for the visitors.

Six of the game’s last seven points went the way of the home side who had the comfort of introducing their full complement of six second half substitutes,. The home side ended the day with seven players on the scoreboard including Jason Lonergan, who was making his first start of the campaign, and Kevin O’Halloran who pointed in the 64th minute with his very first kick of the ball.

All in all it was the easiest of victories for Tipperary, their first back-to-back wins in Semple Stadium during the reign of Liam Kearns, and it sets his side up for an exciting fortnight ahead in which promotion remains a possibility.

But achieving that ambition is still a huge challenge as in the space of seven days Tipp will make two trips to Ulster, to play Down and Cavan. If the results do go their way though, Tipperary may yet find themselves in the company of Dublin, Kerry, Tyrone and others come next spring.