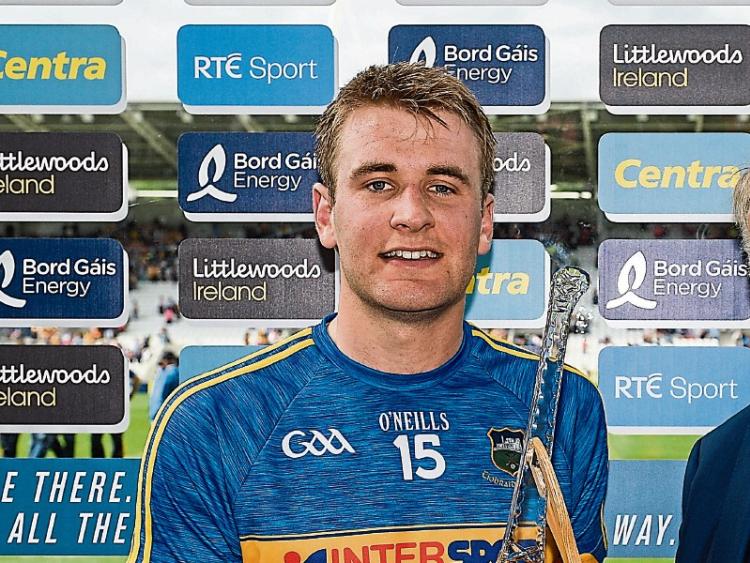 John McGrath will be an important player for Tipperary in Sunday's National Hurling League Final against Kilkenny in Nowlan Park.

Tipperary will be looking for their first win over Kilkenny in the National Hurling League Final in 50 years  - a team captained by the late Mick Roche defeated The Cats by 3-9 to 1-13 in the 1968 home final played in Croke Park - when the counties meet in Sunday's decider.

The game at Nowlan Park starts at 3.30 and the curtain-raiser at 1.30 is the Littlewoods Ireland Camogie League Division 1 Final between Kilkenny and Cork.

Tipp have won the National League crown 19 times, more than any other county, but haven't lifted  the title in ten years, since they beat Galway in the 2008 final played at Limerick's Gaelic Grounds.

Tipperary manager Michael Ryan says he's delighted to have the opportunity to play in another league final, but added "we're not going to talk about winning it or anything like that.

Speaking after his team beat Limerick after extra-time in last Saturday's semi-final, he agreed that the final would give his side the chance to right the wrongs of last year, when they fell to a 16-points defeat to Galway in the decider.

"We keep talking about performance levels and getting it up to an acceptable level, and we certainly didn't arrive at that or anything near it this time last year when we got to the League Final against Galway". Tipp struggled to regain momentum after that crushing 3-21 to 0-14 defeat at Limerick's Gaelic Grounds, something that the versatile Michael Breen (above) is acutely aware of.

“We didn’t get things right last year in the League Final and it snowballed into the championship", says the Ballina player, who scored 2-9 (including 0-7 from frees) when Tipp and Kilkenny last met, again in Nowlan Park, in February.

"That was last year and it's back now and while it’s not a new team it is a different team. We have new goals and it’s been too long really since we won the league. It would be a nice one to have under the belt".

A feature of the county's league campaign has been the use of over thirty players in the run to the final, and Breen says the competition is a good sign of the team.

"We have two competitive in-house matches every week when we go out to train. Everybody is driving each other, whether you are number thirty or fifteen or wherever.

“Everyone is driving ahead. The man behind you is driving you the whole time. We drive each other and we are thankfully in a league final because of it”.

Kiladangan's Alan Flynn, who has been one of Tipperary's finds of the season with a string of impressive performances  at corner back, is also looking forward to Sunday.

“It will be nice to get down to Nowlan Park, as we haven’t won down there in a while. We didn’t do ourselves justice the last time we played down there (a one-point defeat by Kilkenny on February 25). We let the foot off the pedal again.

“We need to win a league. Seamie Callanan is the only player in there that has a league medal and (a win would mean) we would start the year with a medal.

"You see Galway last year when they drove it on after the league win and that's the way we want to go”.

After beating Kilkenny in an ill-tempered home final in 1968 - after which Tipp's John Flanagan and Kilkenny's Ollie Walsh were each suspended for six months - Tipp had to travel to the United States to play New York in the League Final proper.

The first leg of the final was fixed for June 2nd but was postponed for a week because of torrential rain.

The postponed game was called off again because of the assassination of Robert Kennedy, and the two legs were played on successive days, on June 15th and 16th.

There was one Tipperaryman on the New York team, Johnny Murphy of Cashel.