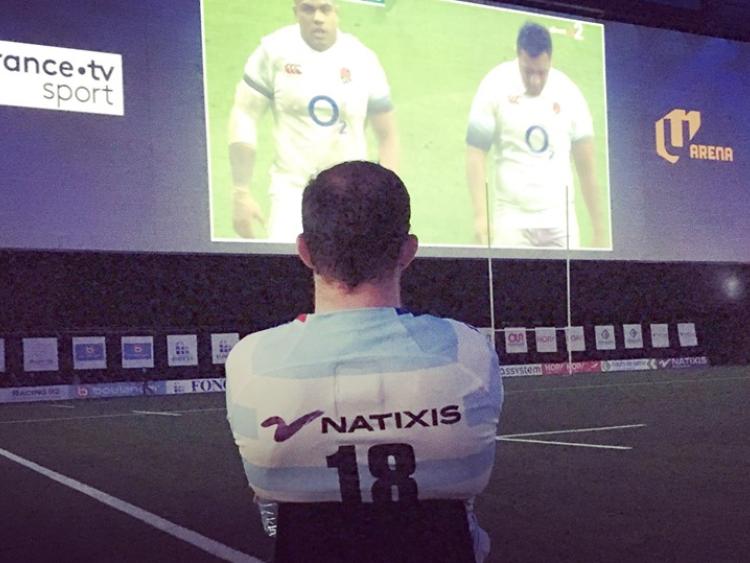 Donnacha Ryan pictured watching Ireland beat England in the recent Six Nations in the colours of Racing 92 at the U Arena in Paris.

Our hearts go out to Donnacha Ryan this week as the torn Tipperary man prepares to take on his beloved Munster in the European Champions Cup semi-final on Sunday, April 22nd at the Stade Chaban-Delmas in Bordeaux (4.15pm local time; 3.15pm Irish time) - on the opposite side of the draw Leinster face Scarlets.

The sides met twice already during the pool stage of this year's competition - Munster beat Racing 92 14-7 at Thomond Park, Limerick while Racing 92 got the better of the Irish province in France. Indeed, the 34-year-old Donnacha Ryan played a key role for Racing 92 during their 34-30 pool stage win over Munster in Paris on January 14th and admitted that it felt “a bit weird” before describing the experience of playing against his former team as “surreal”. A neck injury denied Donnacha the opportunity to face Munster at Thomond Park earlier this season.

Donnacha Ryan’s Munster career came to a disappointing end last season when Rassie Erasmus’ side were beaten 46-22 by Scarlets in the Guinness Pro12 final at the Aviva Stadium, Dublin.
The Pro12 final marked the end of the Nenagh man’s thirteen-year career with the province - the 33-year-old was not afforded a centralized contract by the IRFU and although Munster Rugby offered Donnacha Ryan an opportunity to continue playing with the province the lock forward could not turn down an offer to join French side Racing 92.

Donnacha Ryan, born and bred in Nenagh, starred in Ireland’s first-ever win (40-29) over the New Zealand All Blacks in a test played at Soldier Field, Chicago in November 2016. Ryan has won 47 international caps since making his debut against Argentina in 2008 and played in 167 competitive games for Munster - Donnacha won the Munster player of the year award in 2012.

Donnacha represented Ireland at under-18 and under-21 level, won the Heineken Cup with Munster in 2008 and won a Celtic League with the province in 2009 and 2011. Donnacha Ryan also featured at the 2011 and 2015 Rugby World Cups for Ireland.

Following a nasty foot injury Donnacha Ryan was advised to retire from professional rugby in 2014, but the lock forward worked his way back to full fitness and reappeared in the Munster jersey in March 2015. The manner in which Donnacha Ryan fought back from that debilitating injury captures the defining characteristic of the Nenagh man: grit. Indeed, during Ryan’s recuperation from injury Donnacha also studied geology by night in University College Cork.

In another ironic twist to Sunday's contest Dublin-born referee JP Doyle will officiate the game between Munster and Racing 92 - Doyle is eligible to referee the contest since he plies his trade in the English Premiership and was also in charge when Munster beat Racing 92 14-7 during the pool stage of this year's competition.