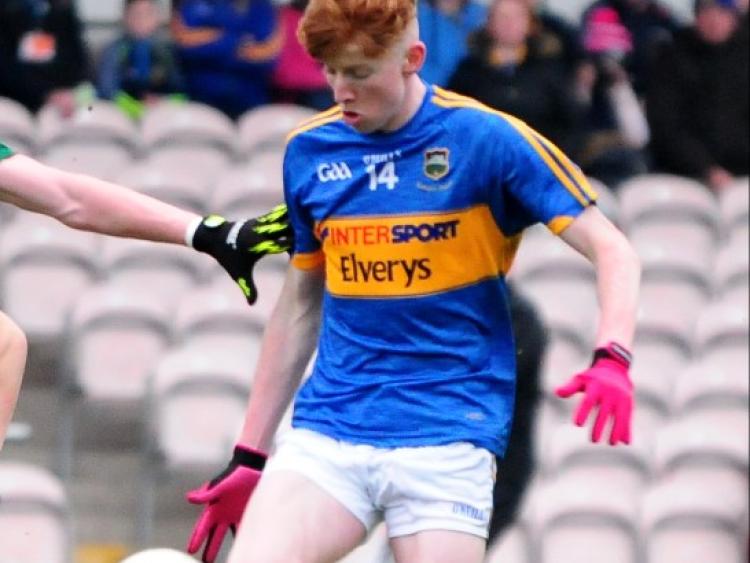 Tipperary booked their place in the last four of the Munster Minor Football Championship when they proved too strong for Waterford in the play-off at Leamybrien on Wednesday evening.
They will approach that semi-final against Clare at Semple Stadium on May 8th with renewed confidence. They were hammered by Kerry by 1-15 to 0-4 in their first game, the quarter-final, at Semple Stadium a fortnight ago.

But they've rebooted impressively since then, defeating Limerick by a goal in a play-off last week before following that up with their latest victory, against Waterford, who played the last 14 minutes (including additional time) with 14 players after Liam Fennell received a second yellow card.
Tipp were the better team in a game watched by an attendance of 540 in Leamybrien. Their margin of victory could have been greater, had it not been for the 14 wides that they kicked (compared to Waterford's four), as well as missing a few chances for more goals.
While satisfied with the win, manager Matt O'Doherty was keen to stress that his team will need an improvement when they take on Clare, who beat Limerick by seven points in the quarter-final.
Tipp were on top for large periods against Waterford. Points from Sean O'Connor and Johnny Ryan gave them an early lead, only for Waterford to hit back with a Liam Fennell point and a goal from their best player, James Power.
However Tipp survived that wobble and a sequence of points settled them, putting them ahead by the narrowest of margins (0-6 to 1-2) by the 26th minute.
They scored their opening goal three minutes before the break when Kyle Shelly's speculative lob beat Waterford goalie Niall McSweeney.
That goal was the headline score in a sequence of 1-4 that they struck without reply in the closing stages of the opening period to hold a healthy 1-9 to 1-2 advantage at the midway stage.
Tipp remained in the ascendancy in the early stages of the second half and they were eight points clear when Devon Ryan buried a shot in the back of the net after his initial attempt for a point had struck the post in the 41st minute.
Less than a minute later, Christy English rattled the crossbar with a fierce drive. Kyle Shelly shot into the side netting shortly afterwards, and he also had a first half effort blocked by Waterford goalie Niall McSweeney, while McSweeney also denied Devon Ryan early in the second half.
But their overall superiority meant that Tipp weren't punished for those missed chances.
Despite their numbers being reduced when Liam Fennell received his marching orders, Waterford showed plenty of spirit in the closing stages. They were revived by lively substitute Padraig Fitzgerald and had a consolation goal a minute from the end of normal time from one of their leading lights, Aaron Ryan.
However Tipp's dominance was never threatened and they ran out worthy winners, ending the game with eight players on the scoresheet, compared to three for Waterford.
Kyle Shelly, Sean O'Connor, Devon Ryan and Max Hackett were their main men in attack, while Kevin Hayes and Keith Ryan were tireless workers at midfield.
Gavin Meagher, Christy McDonagh, Johnny Ryan and captain Mark O'Meara, meanwhile, gave spirited performances in defence.