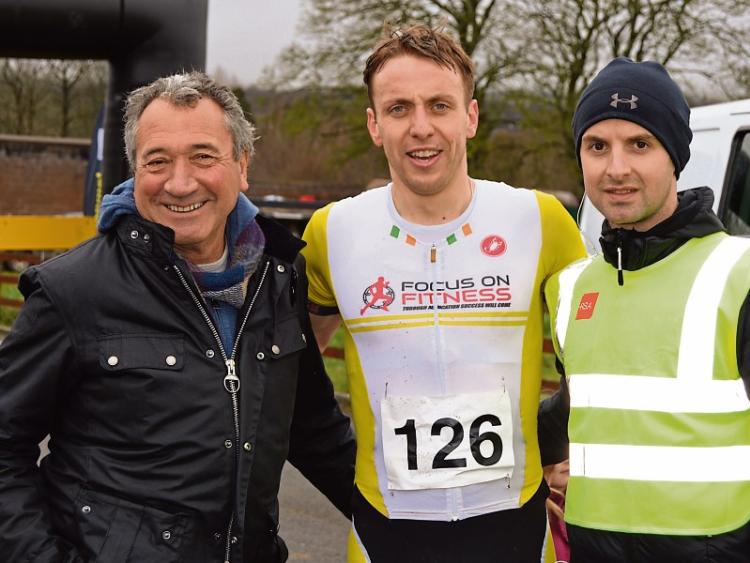 Despite heavy overnight rain, the Camida Clonmel Duathlon course held up very well for the 130 or so athletes who travelled from near and far (including Derry) to race.

Sponsor David Anchell got the race underway and straight from the start Clonmel man William Maunsell (competing in his first Duathlon) hit the front and opened a substantial gap between himself and pre-race favourite Eoin Lyons.

William was first into T1, having run the 4 kilometres in an amazing 12 minutes, 26 seconds, which gave him a one and-a-half minute lead over Eoin and put him two minutes ahead of the chasing pack. Out on the bike course Eoin, a strong cyclist, caught William early and pushed on from there, posting the fastest bike split of the day, covering the 23 kilometres in 36:43.

Coming out of T2 Eoin held a comfortable lead over club mate Marcin Mizgaski, now in second place and Shane Power from Tried and Tested (Dungarvan) in third. The final results were Eoin Lyons, first in 1:08:14; Shane Power second in 1:08:31 and Marcin Mizgaski third in 1:09:38. Coincidentally, these three athletes all take guidance from the same coach!

The women’s race was competitive again this year, with the lead switching a couple of times. Siobhan O'Doherty had more than a two minutes lead starting the bike leg, posting 14:35 for the 4 kilometres run and she looked out of sight. However Siobhan Kennedy made all of that time back and even held a slender lead coming into T2. Fantastic bike legs from KTC athlete Marie Slattery and Blackwater TC’s Deirdre Morrison made the final 4 kilometres run interesting. Although leading into T2, Siobhan Kennedy's 90 seconds Transition handed the initiative back to Siobhan O'Doherty, who was in and out of T2 in a fast 47 seconds.

Nobody was going to catch Doherty from here and she went on to win with 3 minutes to spare (1:19:35). Siobhan Kennedy (1:22:37) came home comfortably in second place and Marie Slattery (1:25:49) took third spot, running a strong final 4 kilometres to hold off the challenge of Deirdre Morrison. Well done to all who supported the Duathlon.The event would not have happened without the help of the 47 Clonmel Triathlon Club volunteers, whose enthusiasm and race knowledge is absolutely priceless; Bobby McCormack for his help providing the venue; the many local businesses for their support; Councillor Michael Murphy; Tipperary and Waterford County Councils; the Civil Defence; Carrick River Rescue, the Gardaí and the local Motorcycle Club for helping keep everyone safe; DJ Mark Hickey, who kept the music pumping; and the Duathlon Committee for their commitment - Brian Corcoran (race director), Eleanor Condon, Laurence Begley and Dave Hogan.

Last but not least the Duathlon Committee is grateful to David Anchell and his team at Camida for all they have done. Having Camida on board allowed the committee to organise the race in a more professional manner.