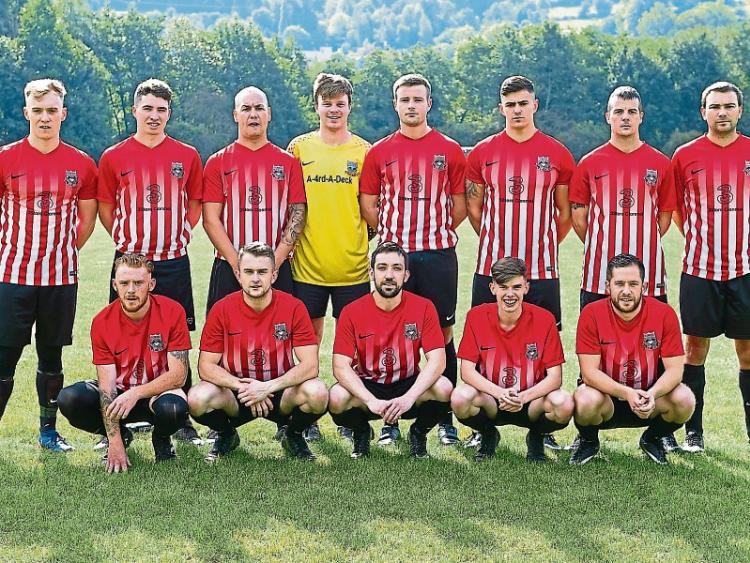 The Old Bridge side (taken earlier in the season) who have given themselves a lifeline of survival with victory over previously undefeated St. Michael's at Green Lane, Clonmel, on Tuesday night last.

Those famous football words of the 1966 World Cup Final commentary from Kenneth Wolstenholme come to mind – “Some people are on they pitch! They think it’s all over. It is now, it’s four.” But in this case it most certainly isn’t – not just yet anyhow.

Following Sunday’s defeat at home to Glengoole United it seemed that Clonmel side Old Bridge were doomed to relegation having just lost out to their nearest rivals by 1-0 in the proverbial six points basement battle. It presented the proud Green Lane side with the thinnest of threads to cling to for their Premier League status. They had to defeat the newly-crowned Premier League champions and unbeaten St. Michael’s on Tuesday night at Green Lane in order to have any chance of staying in the top flight. Amazingly 'The Bridge' did just that with an Aaron Arrigan second half header clinching the precious three points.

But it’s not quite not all over just yet. The unexpected victory over St. Michael’s could earn Old Bridge a play-off with Glengoole United. That will all depend on the outcome of the one remaining league fixture that Glengoole United have, which is against, you guessed, St. Michael’s. That game is fixed for Tuesday night next at Cooke Park. Should Saints, who are playing a Tipperary Cup final against Clonmel Town tomorrow night (Friday) defeat Glengoole United, it will be a case of, in the words of Shakespeare, “once more unto the breach, dear friends, once more.” Old Bridge and Glengoole will have to go to battle once again.

Should however, Glengoole United manage to come away from Cooke Park with a result, then the bravery of Old Bridge will have counted for nothing.

Old Bridge started the game well and looked like they were really up for a fight as one would expect with their Premier League lives on the line. Aaron Arrigan had a great chance for the home side on 10 minutes but his shot blazed just over the bar.

The newly-crowned league champions St. Michael's started to come more into the game and created some half chances of their own. The visitors’ best chance came on 30 minutes when a snap shot was well saved by Liam Powell in ‘The Bridge’ goal. The Clonmel side came close again in the 35th minute when Ian Cleary saw his shot tipped around the post by the St. Michael’s keeper. The sides went to the interval scoreless with Old Bridge potentially about to play their last 45 minutes in the top flight.

Old Bridge finally went ahead on 49 minutes when a lovely ball played in by Ian Cleary saw Aaron Arrigan meet the cross and head past the St. Michael's keeper. Dare they dare to dream!

This setback however only seemed to summon the champions into a more determined effort as they fought to maintain their unbeaten Premier League run and they began to up the pace considerably in an effort for an equaliser. But still Old Bridge created plenty of chances of their own and were playing some nice football.  Both sides traded chances and came close on a few occasions.

St. Michael's best chance of the game came in the 85th minute when the ball was played to the back post and when it looked easier to score, somehow the ball was put wide much to the relief of the home support.  A gasp went up around Green Lane. ‘The Bridge’ remained standing, at least for now.

Old Bridge held on for a vital three points in what may yet become a famous day in the history of the club. Time will tell.