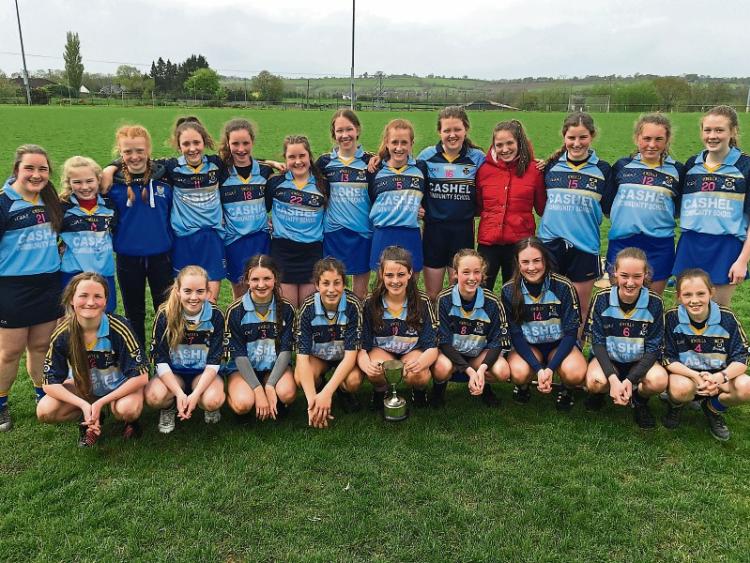 Competing in ‘A grade’ for the first time since such household names as Una O’Dwyer and Emily Hayden were in the school, it gave the girls a chance to really judge themselves against some of the powerhouse names of Munster schools camogie.

First up was Coláiste na Phiarsaigh from Cork, and although the Cashel girls squandered a lot of scoring chances they still prevailed on a score line of 2-8 to 0-1.

Next up was a local derby with the Ursuline, Thurles. Cashel were starting to find a rhythm, notching up an impressive 12 points to win easily. This set up a final against a physically strong and well drilled Coachford Community School. Against a school that has had lots of success in recent years in schools’ camogie the Cashel girls showed some superb skill and talent to score 2-10, whilst also showing grit and determination to keep the Coachford girls scoreless, ensuring that the cup would return to Cashel for the first time since its inception. Captain Grace Maloney received the cup on behalf of a committed bunch of players and mentors Ruth Barry and Trevor Galvin.

Cashel camogie club and adjoining clubs like Knockavilla Kickhams and Boherlahan must be given credit for the underage work that they are doing with these girls and hopefully the school can complement that work to ensure both the school and clubs can return to the heights of past glories in the not so distant future.