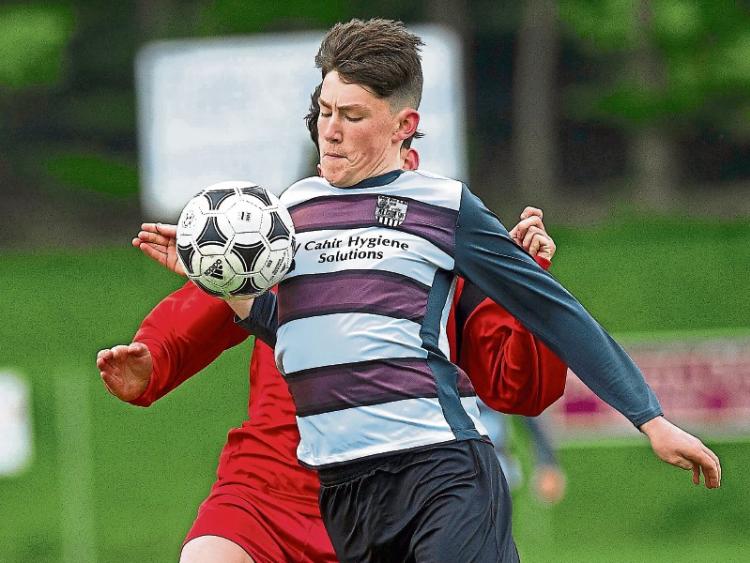 St Michael’s went into this game as warm if not overwhelming favourites to add the Joe Delaney Cup to the league title they won a month ago, but they were ultimately beaten by a talented and hungry Cahir Park team determined to snag some silverware at the end of a long season.

The home side were out of the traps quickly and controlled the game from the beginning, creating a number of early chances without scoring.

That changed in the 28th minute when Rhys Byron beat two Saints defenders after receiving an exquisite pass from the midfield, and he slammed a ball to the net from the edge of the area.

That was just reward for what the Park had being doing in a busy first half, but the telling score of the game came two minutes before the break when the home side doubled their advantage through a David Clifford effort from just inside the visitor’s box.

St Michael’s were never going to stay on the backfoot throughout the game and came back hard in the early part of the second period.

The Park defence held well and it was almost a surprise when they switched off for a few moments in the 73rd minute and allowed Colm O’Dwyer to sneak in behind and reduce the lead to a single goal.

The Saints youth threw the kitchen sink at Cahir after that and almost equalised ten minutes from time, only to see an effort cannon back off the upright.

Cahir though weathered the storm and put the result to bed seven minutes from the end when Rhys O’Regan scored a brilliant individual effort, picking the ball up at the halfway line and beating a number of defenders before slamming the ball into the net.

The 3-1 lead didn’t flatter the Park and they will be delighted with the reward for their efforts, and no doubt be looking forward to building on this in the season ahead next September.