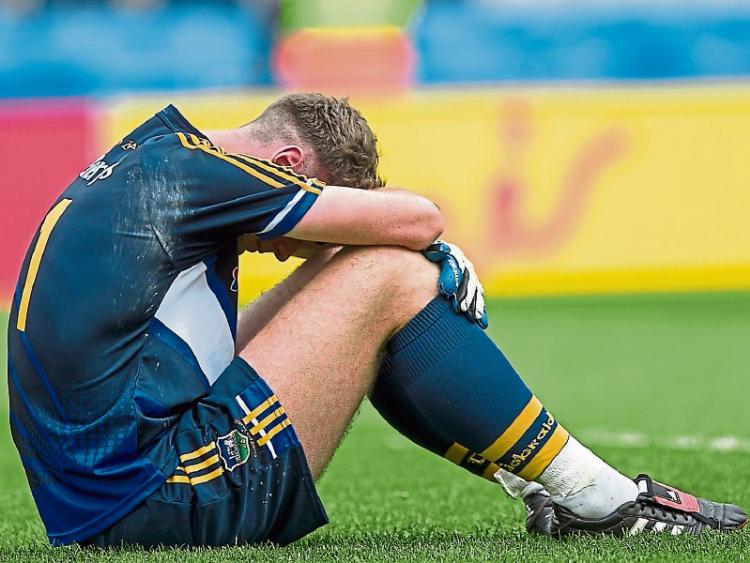 Disappointment for Tipperary footballers this evening with defeat to Cork in the Munster semi-final.

Expectations of another close and exciting Munster Senior Football Championship clash between Tipperary and Cork never materialised at Semple Stadium, Thurles, this evening, with Cork emerging comfortable 11-points winners this time around.

Somewhat spoiled over the past three years with edge-of-seat provincial semi-finals between the sides, on this occasion the pace, power and poise of Cork proved way too much for the home side. The Leesiders were very much in control at the half-time interval when they led 1-8 to 0-4, and when they tagged on a further three points without reply in the opening eight minutes of the second half it was certainly game over for Liam Kearns’ side.

There were no excuses or indeed answers afterwards as to why Tipp had produced one of their most disappointing performances in the Kearns three years era. The downside of the defeat is that the hopes of a Munster final against Kerry (or Clare) in Thurles in a month’s time are now gone. Tipp must now try and dust themselves down for the summer lottery of qualifiers if they hope to make the Super 8’s later. On this evening’s performances that may well be a bridge too far in 2018.

After 20 minutes of play the game was showing plenty of promise as both teams counter-attacked and were level at 0-3 apiece. But the following 10-12 minutes saw the game change dramatically as Cork gained the initiative to score 1-4 without reply. ‘The Rebels’ cause was helped no end by a goal on the half-hour from Colm O’Neill who was set up by Luke Connolly coming in front the right hand side. Indeed Connolly who broke our hearts 12 months ago in Páirc Uí Rinn was one of Cork’s outstanding players once again, scoring ten points over the 70 minutes, five from play and five frees.

Tipp’s meagre first half total of four points consisted of two frees and two from play (Michael Quinlivan and Liam McGrath);  Tipp also had two half-decent goal chances in the first 20 minutes from Quinlivan and Liam Casey, but Cork keeper Mark White managed to save both efforts. It was the only period of the game that Tipp really threatened; they would sorely rue the lost opportunities in the end.

It took Tipperary all of 14 minutes of the second half to get on the scoreboard with another Liam McGrath free. That score was to be the first of five unanswered points as Tipp tried to rally – Liam Boland, McGrath (F), Philip Austin, and McGrath again in the 58th minute all pointed to reduce the deficit to five points.

But that would be it, Tipp would fail to score again for the last 17 minutes of play (12 + 5 added) as Cork sent for the cavalry including the likes of Brian Hurley and  Paul Kerrigan, and they had the last six points unanswered to ease comfortably back into another Munster final probably in Páirc Uí Chaoimh.

For Tipp it is now a case of a time-out and an extended pit stop to see what can be done to get the wheels back on after this evening's serious setback. Perhaps, the seven-day turnaround since the win over Waterford last Saturday took something out of the legs, but that aside Tipp will know that they will have to perform to a much higher standard if they are to prolong the summer. We will wait for that response now.