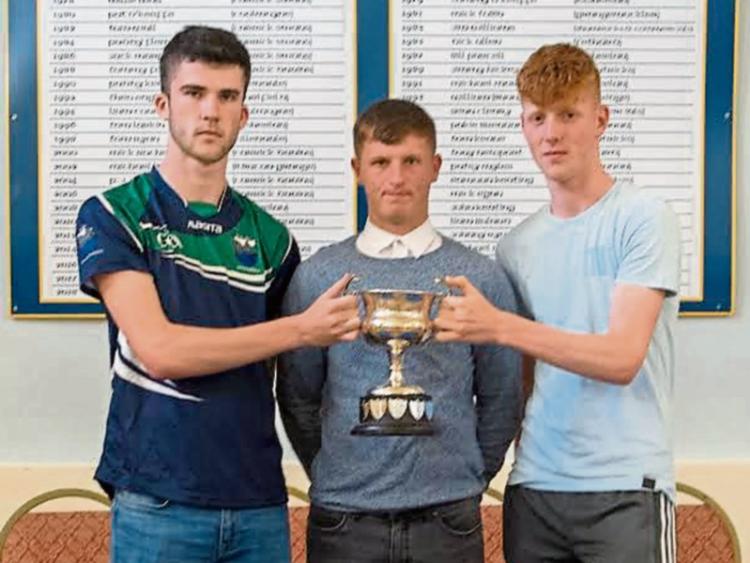 From left to right: Dylan Fitzgerald (Cahir) (standing in for Sean Murphy who was unavailable), Christy English (Ballyporeen) along with Shane O'Connor (Clonmel Og), joint captains of the combo team.

The South Minor ‘A’ Football Final between Cahir and Clonmel Og/Ballyporeen goes ahead on Sunday  next, 22nd July at Clonmel Sportsfield at 5 pm, and for the first time in many years will feature neither Clonmel Commercials or Moyle Rovers.

The game will be a curtain-raiser for the Senior Hurling Final between Killenaule and Mullinahone .

This year’s  Minor ‘A’  Championship was between five clubs, Clonmel Commercials, Grangemockler/Ballyneale, Moyle Rovers and both of Sunday’s finalists.

Without question, it has been one of the most competitive and evenly contested championships at this grade for many years.

There was little if anything between all five sides, and it could be said that the one team who didn’t make it to the semi-finals after the round-robin, Clonmel Commercials, were desperately unlucky not to have done so. That young squad, under the guidance of Paudie O’Keeffe, came on in leaps and bounds over the course of their games and were transformed from a group that up to this year were somewhat behind the others in terms of competitiveness.

Cahir advanced to the final with 1-10 to 0-10 semi-final win over Moyle Rovers at Ardfinnan. Davy McEniry’s side were put to the test on a sweltering evening by the Monroe outfit, last year’s South and county winners, but they prevailed in the end. Three points down at half-time and five down after Rovers had the first two scores of the second period, Cahir put in a storming final quarter. With some great scores from Jake Fitzgerald, Stephen Grogan, David Clifford and Tommy McDonagh they overpowered Moyle Rovers for a fully deserved win. Their powerful finish, in which they dominated the last quarter, indicated not alone a strength of body but of mind too.

The Clonmel Og/Ballyporeen side earned their place in the decider with a stunning 6-8 to 1-10 victory over Grangemockler/Ballyneale in their semi-final. Here the combo team turned the tables on their opponents who earlier in the competition had beaten them decisively. This time round a strengthened ‘Og/Bally’ side did a job on their opponents with ace forward Christopher English finishing with a personal tally of 2-2.

Cahir will be wise to take notice of this performance. In their early game at Ballylooby against Sunday’s opponents  - the first of the campaign played  - Cahir  had a comfortable win, but they would be foolish to read too much into that display. An unsettling feature of the combo’s four-game round robin programme was an inability to field at full-strength for each game.

In the semi-final they were more or less at full throttle and in Sunday’s final spectators can expect a much more evenly contested encounter.

Clonmel Og claimed their only South Minor ‘A’ success in 1990 and would love to bridge that gap which would do wonders for the Ned Hall Park based club.

Certainly Cahir will start as favourites to win a title they  last captured in 2000. Captained that day by Robbie Costigan, Cahir, who defeated Moyle Rovers (2-12 to 0-13) in the final, included the likes of Paddy O’Flaherty, Brian Enright, Gavin Berry and Padraig Whelan and others who went on to win a county senior title just a few years later in 2003.  They get the nod to end that 18-year gap on Sunday next.