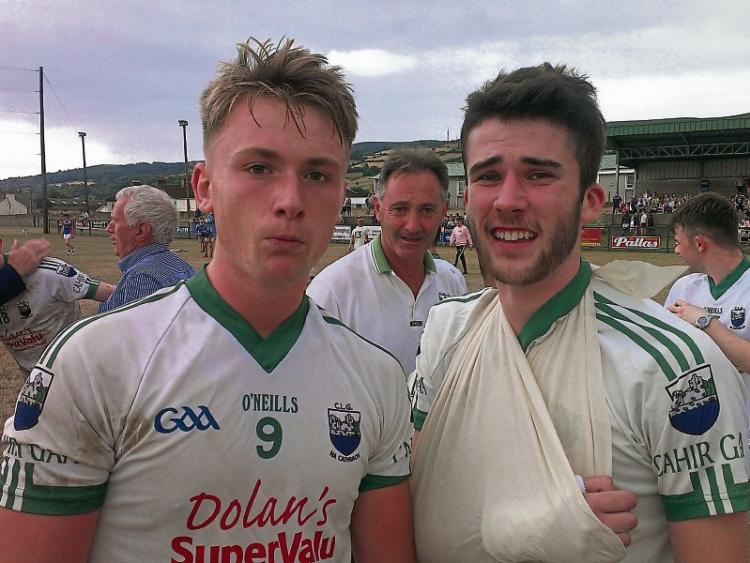 Stephen Grogan (left) who was man of the match in this evening's South Minor 'A' final win. On right his midfield partner Dylan Fitzgerald who was forced off injured at half-time.

Cahir minor footballers are South Tipperary minor ‘A’ champions for the first time since 2000 by virtue of a two points victory over the Clonmel Og/Ballyporeen in an thoroughly enjoyable final played at Clonmel Sportsfield on Sunday evening last.

Time and time again the victors encountered setbacks during the game, but each time their never-say-die spirit wouldn't allow them capitulate or let go of a title the club coveted. In the end it was this indomitable spirit that saw them succeed.

Their first setback came very early on when they fell behind to a goal by Ayo Williams after just two minutes, but they soon settled and got back to level half-way through the first half.

Then just before the interval they were knocked back again when their star midfielder Dylan Fitzgerald picked up a wrist injury which ruled him out for the entire second half.

And if that wasn’t bad enough half-way through that second period, when already down by two points, they had a player dismissed for a second yellow card, which meant they played the last 15 minutes a man short.

Each time they refused to bow and magnificently they put in a storming finish – as they did in their semi-final against Moyle Rovers – regaining the lead six minutes from time with a sublime goal from man of the match Stephen Grogan. Thereafter they were not for turning and held out for a 2-11 to 2-9 victory.

But spare a thought for Ballyporeen/Clonmel Og. They too were warriors on the night and their performance matched the favourites all the way through. They also can hold their heads up after a final that was non-stop action from start to finish and a great advertisement for underage football in the South Division.

On a bone dry pitch it was the underdogs who got the perfect start and a platform for them to take the challenge to the unbeaten Cahir boys. A move involving Dean Finn and Cian O’Sullivan released the hard-running Ayo Williams and the half-back, who began the move, blasted to the net after just two minutes for a rocking start to this final.

Christopher Egan with his first free of the evening stretched that lead to four a minute later, before David Clifford with a free got Cahir off the mark in the fifth minute after Stephen Grogan had been fouled.

A long range free from Grogan from the Hospital sideline bounced 10 yards out from goal and over the bar, indicative of the texture of the surface due to the extended dry period.

Christopher Egan made it 1-2 to 0-2 after 12 minutes with his second free of the evening but that three points differential was soon to disappear.

A great run out of defence by Tommy McDonagh saw him test Kieran Macken in the goal with a low shot, but full-forward Sean Murphy was quickest to react to the loose ball from the rebound and rammed home an equaliser - 1-2 apiece after 14 minutes.

Tommy McDonagh kicked his side into the lead for the first time almost from the kick-out after good work by Francie Delaney but that lead was brief as within minutes Cian O’Sullivan restored parity after being fed a good ball by Kevin Hawkins.

If Cahir had their somewhat fortuitous hopping ball point, so too had the combo when a long delivery by Dean Finn bounced over for the lead in the 21st minute.

The same Dean Finn then started a move and working through Jake Guinan the ball was played to Cian O’Sullivan who goaled superbly after a great run at the heart of the Cahir defence. 2-4 to 1-3 now for ‘The Og/Bally’ and they were really putting it up to Cahir.

But they hadn’t panicked after the first goal and again Cahir went about their business with three unanswered points from David Clifford (from a tight angle), a Stephen Grogan free (won by Francie Delaney) and a point from Jake Kiely, his effort crashing off the crossbar and over when there was a goal there to be taken.

An opportunistic point from Rhys O’Regan three minutes into added time sent Clonmel Og/Ballyporeen to the break leading by 2-5 to 1-6.

At the interval Cahir were forced to substitute the injured Dylan Fitzgerald, but in Mark Casey they got a good replacement with a very decent second half workload.

Point for point the sides traded and the gap was still two midway through the second half.

Two minutes after the restart Kevin Grogan pointed for Cahir only to be nullified by a Christopher English free three minutes later. An excellent point by Cahir team captain Sean Murphy when cutting in from the Albert Street side was again matched by another free from Ballyporeen's Christy English. And when free-takers English and Stephen Grogan added a free each the advantage was still with the combo at 2-8 to 1-9 after 46 minutes.

And that was when Cahir suffered a huge loss with the dismissal of Tommy McDonagh for his second yellow of the evening. It left Cahir with a big task now, two points in arrears and with a man less.

Jake Fitzgerald won a free which Stephen Grogan converted once more to reduce the gap to the minimum as scores were at a premium with players beginning to tire in the heat of the evening.

Six minutes from time the match-winning moment arrived and it was once again Stephen Grogan who produced the magic. A move involving Nicholas Reidy and Tommy Magner found its way to the Cahir midfielder who held off a few challenges before planting the ball high in the net from 20 metres out. It put Cahir ahead for the first time since the 15th minute and this time the lead was not going back.

In a high octane last five minutes, the combination side got it back to a single point with a Cian O’Sullivan free into Cantwell Street, but three minutes from time, Stephen Grogan, ice cool, landed another superb free kick under pressure to maintain his side’s two points lead.

Soon afterwards Brian Tyrrell blew it up and the 18 years gap for Cahir minor footballers and Robbie Costigan’s class of 2000 was finally at and end.

Congrats to the winners but commiserations also to ‘The Og’ and Bally’ for such a great display.