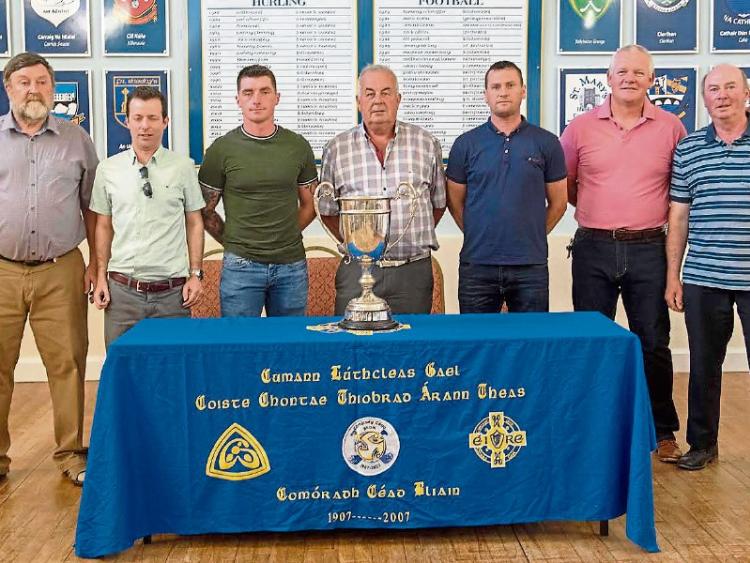 The South Tipperary Intermediate Hurling Final is on Sunday next at Monroe. But who will South Board chairman, Hugo Browne (centre) be presenting it to?

The South Intermediate Hurling Championship Final, sponsored by Martin’s Fruit & Veg (Clonmel) goes ahead at Monroe on Sunday evening next at 7 pm with Ballingarry’s Paddy Ivors in charge.

Contesting for the Jerome O’Dwyer Cup will be Carrick Davins and Ballybacon/ Grange, the former beaten divisional finalists last year, the latter county Junior ‘A’ champions twelve months ago.

Supporters can make strong arguments for boths sides to prevail on Sunday next with form lines of late equally impressive.

Ballybacon/Grange, while beaten by Skeheenarinky in last year’s South Junior final, still went on to win the county title when defeating Toomevara in the final played at  Boherlahan. They took energy and drive from that success - the first at county level for the club at adult grade - and went  on to contest a Munster final in Mallow against Ardmore, having defeated St. Catherine’s of Cork and Kenmare of Kerry along the way to the provincial decider.

The Davins had a shorter hurling season 12 months back. They went into the South final against St. Mary’s in Kilsheelan as divisional champions having beaten the Clonmel side the previous year in the decider. However this time round they were well beaten by ‘The Mary’s’ who in turn went all the way in  winning the county crown, defeating Gortnahoe/Glengoole in the final played  in Golden.

This year both Davins and Ballybacon/Grange have been motoring along nicely.

The Sean Maher managed Ballybacon/Grange  seem to have made the step back up a grade seamlessly and in both championship games they have contested in 2018 they have come out on top.

In the County Championship they were winners against Kilsheelan/Kilcash and then in the South semi-final in April they proved to be too strong for Moyle Rovers.

The Davins are now in their fourth year at intermediate grade since losing their senior status and one would imagine that in itself should give them an edge in Sunday’s encounter. They had a few points to spare over Kilsheelan/ Kilcash in their South semi-final three months ago and will be hoping to carry that form on again against Ballybacon/ Grange. They can count on all of last year’s panel, more or less, plus the addition of former Swans hurler Aaron O’Halloran and of course Lee Mackey who missed last year’s final through injury but will line out on Sunday next.

It promises to be a lively affair - the sides last met in the 2007 final in Kilsheelan when Ballybacon/Grange came out on top. Will the Carrick boys at last get the opportunity to turn the tables this time or will Ballybacon/Grange, winners of the South Intermediate crown nine times in the 15 year period 1998 to 2013, do once more what they seem to do best. Might either go on to emulate St. Mary's with a county title.

Sunday will tell a lot?