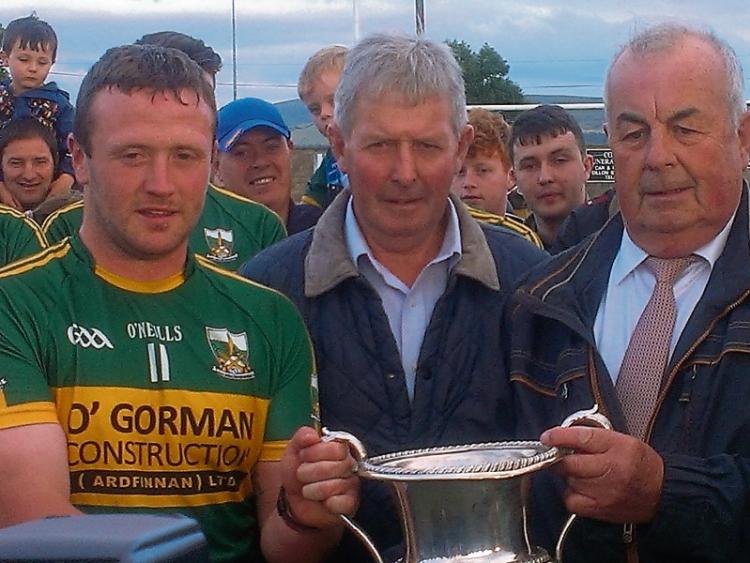 In only their first year back in Intermediate grade, Ballybacon/Grange are this evening celebrating a South Championship final victory having overcome Carrick Davins in a good standard final played at Monroe in ideal conditions before a decent sized crowd.

It’s a well worn cliche that goals win games, but that’s exactly as it was in this South final, the county Junior ‘A’ champions of last year benefiting greatly from three green flags, two of which were softly enough conceded by the Davins.

But there was no doubting that the better side emerged victorious. The Davins had recovered from a six points first half deficit to get their noses in front at the three-quarter mark, but a storming final 15 minutes saw the Sean Maher managed side outscore their opponents by 1-5 to 0-3 to seal a satisfying victory.

Besides the concession of three goals, the straight red card dismissal of Davins’ Gerard Robinson by referee Paddy Ivors in the 43rd minute proved very costly for ‘The Reds’ in the end also.

It was nip and tuck right through, the sides level on no less than seven occasions – the final occasion at 3-9 to 0-18 with just 10 minutes remaining. But Ballybacon/Grange have a winning way about them these days, and they pushed for home with some superb points to once again get their hands on the Jerome O’Dwyer Cup as South Tipp IHC champions, for a 10th time in the past 20 years.

Davins were two points to one up after 10 minutes when Ballybacon’s first goal arrived. A well cut sideline ball by Brian Dillon seemed to get a touch from an unlucky Davins defender into his own net to put Ballybacon 1-1 to 0-2 ahead. Brendan Cummins had opened the scoring from a 65, cheaply conceded from another Brian Dillon sideline which seemed to be fading wide. The goal cancelled out two excellent early Davins points from Patrick Harris and Michael Cronin from the tightest of angles.

After Ballybacon captain Declan Walsh and Luke Faulkner traded points, Ballybacon got their second goal after 14 minutes. A good move involving Daniel O’Regan and Billy Hewitt, fed Aaron Lonergan and he shot low to the net for the best goal of the game.

A monster free from Brendan Cummins from well inside his own 65 put Ballybacon 2-3 to 0-3 up on the quarter hour mark and many wondered could the Davins respond.

Magnificently they did and they rattled off six points without reply in little over six minutes with Willie O’Dwyer, Michael Cronin (2), Stephen Cronin, Luke Faulkner and Billy Roche producing some wonderfully skilful scores. Suddenly the Carrick-on-Suir side were level for the second time in the game on 22 minutes.

And twice more they would exchange parity before the break as both sides produced excellent scores. Another huge trademark Brendan Cummins free was cancelled by Michael Ryan’s point on the run, before Lee Mackey himself hit a point from well inside his own half only for Aaron Lonergan to level matters with a close-in free for Ballybacon.

Again Cummins, with his fourth placed ball point of the opening half, sent his side to the break leading 2-6 to 0-11.

‘The Village’ started the better and extended their advantage to three within three minutes, an exquisite point from captain Declan Walsh, followed by a free from ciotóg Aaron Lonergan.

But the Davins then had four points from play in a row in the next eight minutes to wrestle back the lead – Billy Roche, Stephen Cronin, Willie O’Dwyer and Luke Faulkner all pointing for a 2-8 to 0-15 lead for the Carrick side.

The Davins were to suffer a huge setback in the 43rd minute. Declan Walsh was cutting right through the heart of their defence when Gerard Robinson came to meet him and in a high and awkward challenge flattened the Ballybacon/Grange captain. Referee Paddy Ivors took his time before flashing a straight red to the veteran Davins man.

The Carrick side, beaten in last year’s final to St. Mary’s, were still a point to the good after a further exchange of Brendan Cummins and Lee Mackey frees. But then another disaster struck. A long-range delivery into the goal area from out on the right wing by Declan Walsh deceived everyone and landed in the back of the Davins net to hand the initiative back once again.

But as they had all evening, the Davins stuck to their task and super points from Willie O’Dwyer and substitute Brandon O’Sullivan brought them back level for the seventh time on the night with 10 minutes to play.

But it was Ballybacon/Grange who drove on the better and in an impressive finish outscored Davins 0-5 to 0-1 in those dying minutes.

Daniel O’Regan (2), Aaron Lonergan (2, including a free) and Michael Hogan raised white flags in a rousing finish for last year’s beaten Munster Junior ‘A’ finalists while all the Davins could muster coming down the stretch was a Patrick Harris free.

There was to be no denying Ballybacon/Grange yet another South Tipperary Intermediate Hurling title at the end of an good quality and entertaining game.