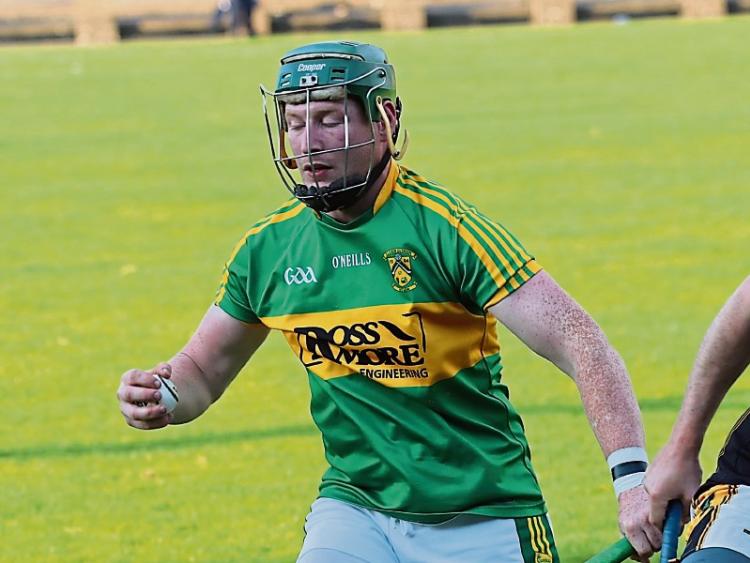 Clonoulty-Rossmore came up just short in their bid for a second win in round two of group one of the Tipperary Water county senior hurling championship,  their last-gasp bid for the points failing narrowly as Nenagh Eire Og emerged victors at The Ragg, 1-20 to 1-18.

It was a disappointing  result for the West champions who looked to have matters well in control as they led by six points early in the second half but a  slump which saw Nenagh register 1-5 without replay in thirteen minutes, to forge four points clear left Clonoulty with too much to do, and too little time to do it as they came good again at the end of an exciting tussle.

It was an exciting finish to a contest which while always interesting really did not come to championship pitch until that closing quarter.

While the win almost certainly guarantees Nenagh’s place in the knock-out stages of the championship, Clonooulty have the luxury of having qualified as West champions and their final game against Roscrea does not bring with it the pressure it might otherwise have.

This was one of the top games in a busy fourteen game senior hurling week-end programme and it lived up to expectations with both sides enjoying their periods of dominance and the losers, no doubt, regretting missed opportunities which could have given them victory.

What really clinched victory for Eire Og was the excellence of Daire Quinn in their defence and even more so the unfailing accuracy of Mikey Heffernan from play and frees. He scored  thirteen points in all, four from play, in a Man of the Match performance.

The first half was a tepid enough affair with the sides swapping points along the way to 22  minutes when they were all square at seven each. Jake Morris briefly edged Nenagh in front but in the 25th minute when Dillon Quirke was hauled down going through, Cathal Bourke was clinical in his finish from the penalty. Further points from Enda Heffernan and James Hammersely opened a three point gap for Clonoulty but Nenagh finished strongly with points from Mikey Heffernan and Andrew Coffey, leaving the West lads one point to the good at the break, 1-9 to 0-11.

At this stage it was pretty much anybody’s game. Eire Og were relying heavily on Mikey Heffernan’s scoring, he had seven points in the first half, five from frees, while Clonoulty had a greater spread of scorers, six of their men getting on the board. Nenagh lost Barry Heffernan to injury after only twelve minutes but had the experienced John Brennan to call on, while the work of Michael Ryan at midfield, Cathal Bourke and James Hammersley in attack were positives for the West champions.

Clonoulty reeled off three points inside two minutes of resuming and though Mikey Heffernan responded for Nenagh, a further three points  for Clonoulty had them motoring strongly into a six points lead by the 37th minute,1-15 to 0-12. Jake Morris had a blast for goal turned out for a sixty five which Mikey Heffernan converted to kick-start a Nenagh revival. Philip Hickey goaled for them three minutes later after Tommy Heffernan and Paddy Murphy did the ground work, and now the momentum lay with  Eire Og, who might have had a second goal but Tommy Heffernan’s drive skipped across the face of the goal and wide.

A brace of Mikey Heffernan points levelled for Nenagh, and Andrew Coffey and  Mikey Heffernan followed up with further points for the lead, 1-17 to 1-15, after 52 minutes. Michael Ryan temporarily stopped the slide for Clonoulty but then points by Jake Morris, and the Heffernans put Eire Og four clear with time running out.

Game over, one thought, but Clonoulty did not buy into that. Awarded a twenty meter free Timmy Hammersley blasted for goal. It was beaten out for a sixty five. Paudie Whyte pointed in injury time and James Hammersley cut the deficit to two. Still Clonoulty poured forward but Timmy Hammersley’s effort for a winning goal was turned away. Time ran out and Nenagh  were relieved to hear Johnny Butler’s full-time whistle.

A big win for Nenagh Eire og who are coming together nicely as the championship warms up, Mikey Heffernan was star of the show for them with Daire Quinn, Paddy Murphy, Andrew Coffey, and Philip Hickey also doing well.

A setback for Clonoulty who must now beat Roscrea in their final game to progress from the group, although their West final success ensures  their place in the knock-out stages anyhow. They will be disappointed at the chances they wasted which could have given them victory but as a measure of where they stand in the championship race they have every reason to be pleased. They are right there in the frame with John O Keeffe, James Hammersley, Michael Ryan, Cathal Bourke, and Enda Heffernan leading the way on Sunday last.