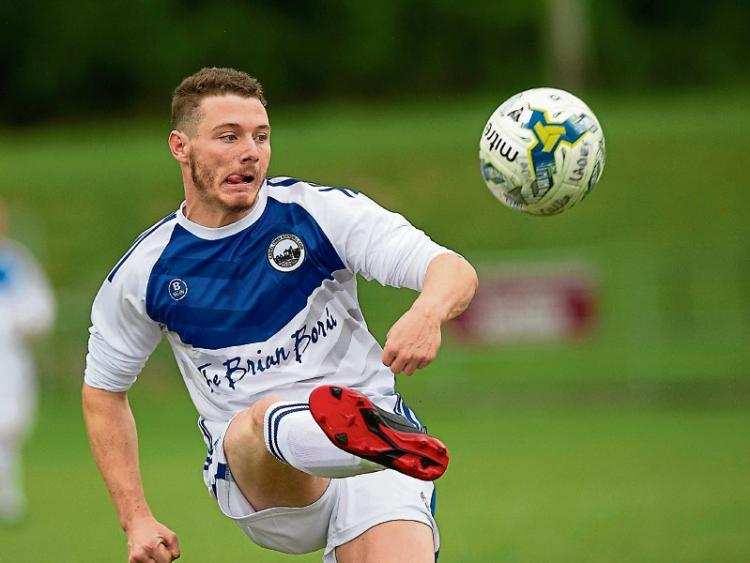 Brendan Ryan (Cashel Town) attempts to lob the Suirside goalkeeper during his side's 3-0 victory in the opening game of the Division 2 season at Palmershill on Sunday last.

Galbally United begin their season in this year’s Second Division after being relegated last year, with a comprehensive win over an out classed Burncourt Celtic side.

The real damage early on was inflicted by United’s Ger Quinlan who scored the first two of his four on the day in the seventh and 12th minutes to give his side a good start.

They then got a third on the half hour mark to send them to the break three up, before Jamie Morrissey added a fourth in the 55th  minute.

Quinlan then got his second brace of the game with two goals in the 60th and 75th minutes as Galbally United ran the Burncourt side ragged.

Chris English finally got one back for the home side ten minutes from time, but the scoring was closed by the visitors when Scott Fitzgerald found the net five minutes from the end.

Clonmel Celtic get stuffed for seven!!!!!!!

This was the proverbial game of two halves with the strong wind having a huge bearing on the final result. The home side played with the elements to their backs in the first half and dominated the game, going to the break two goals in front courtesy of an own goal and a Darragh Mooney effort.

The second half was the complete opposite as now Kilmanahan had the advantage, and they made it count on three occasions, with goals by Darren Guiry, David Meehan and Nathan Dolan, to wrap up their first win of the season. Cashel Town started life in the Second Division for the first time in almost a decade after two consecutive relegations, and they showed that they will be among the favourites to take one of the promotion spots this season, with a good win at home to Suirside.

The performance was solid if not spectacular from the start and they opened the scoring in the 25th minute when Eoin Byrne showed his class to rattle the net from close in.

Ten minutes later Brendan Ryan doubled the scoring and the home side went to the break two goals to the good.

The second half was a tame affair and neither side really put a stamp on it until twenty minutes from the end when the home side assured themselves of the points with an Ian Hahessy finish after some good work around the Suirside area.