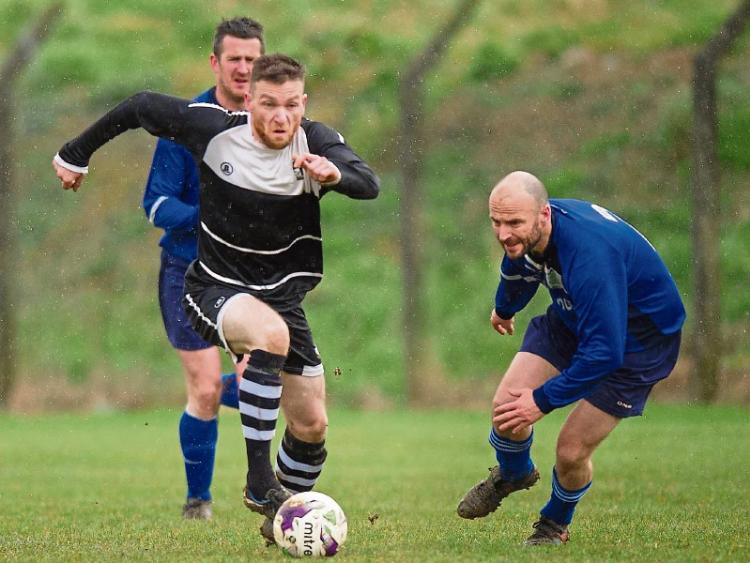 Darren Murphy was one of Cahir Park's goalscorers on Sunday in their 4-3 win over Bansha Celtic.

Cahir Park played host to a rip roaring local derby against Bansha Celtic on Sunday that had the fine crowd on their feet throughout.

In the process the home side picked up their first win of the season, against a highly fancied Bansha Celtic side who have now lost both of their opening games, despite so much being expected of them at the beginning of the year.

The visitors were trying to get back into a winning groove after their unexpected loss two weeks ago and had the better of the opening skirmishes, but were rocked back on their heels when Alan O’Donnell slammed home a brilliant effort from well outside the area in the 25th  minute to give the Park the lead.

That advantage only lasted five minutes however as another teen sensation Killian Fitzgerald added to his burgeoning reputation when he pulled back an equaliser leaving the home defence on their heels.

But just as it looked like the game might go to the break level, Ciaran Lambert put the Cahir Park back in front when he hit a curling shot past the helpless Celtic keeper.

The second half then started with more excitement as Bansha were awarded a penalty kick which was not only dispatched by Kevin Mullins but it saw the home side also reduced to ten men.

That could have been the start of hosts folding, but instead Cahir Park  redoubled their efforts and brought a huge intensity to their game, which saw them score two goals in a seven minute period through Shane O’Neill and Darren Murphy, to lead by 4-2 in the most unlikely of circumstances.

Bansha were in no mood to go quietly however and reduced the deficit once again to a single goal with five minutes left after Niall Daly pounced, but try as they might, they were unable to get that elusive fourth that would have salvaged a point, and now find themselves rooted to the bottom on the table despite the huge pre-season expectations.